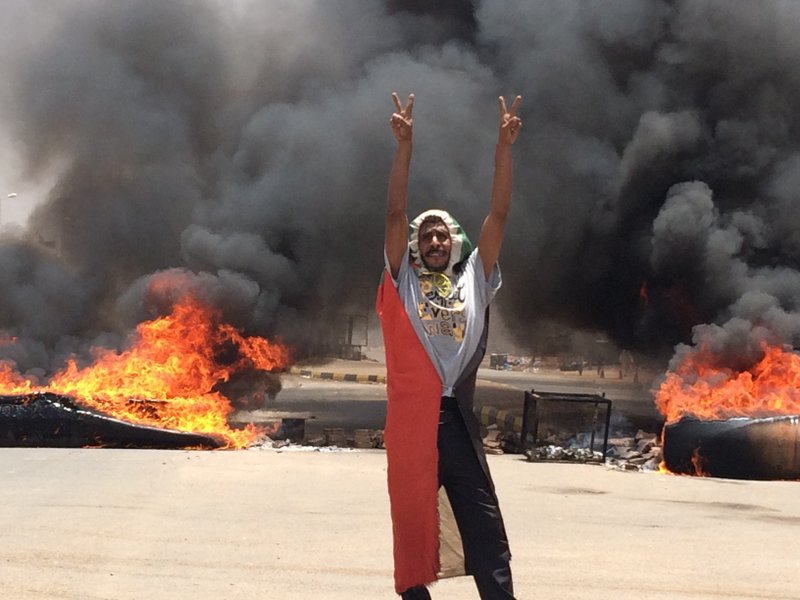 A protester flashes the victory sign in front of burning tires and debris on road 60, near Khartoum’s army headquarters, in Khartoum, Sudan, Monday, June 3, 2019. Sudanese protest leaders say at least 13 people have been killed Monday in the military’s assault on the sit-in outside the military headquarters in the capital, Khartoum. The protesters have announced they are suspending talks with the military regarding the creation of a transitional government. (AP Photo) 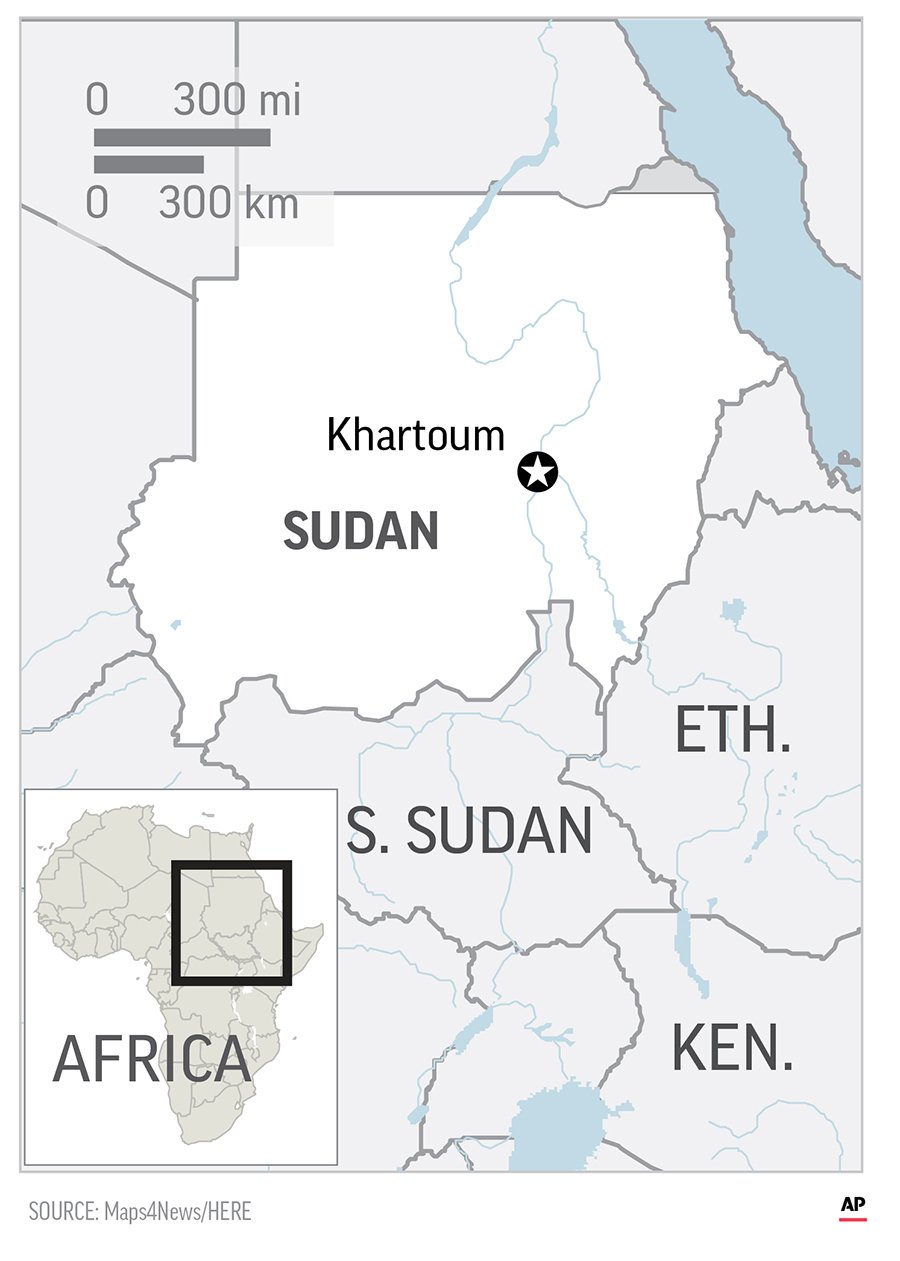 Sudanese pro-democracy protesters defy the country’s military rulers, with thousands turning out for prayers marking a Muslim holiday and chanting slogans against the generals.;

A spokesman for the protesters said they would instead continue their pro-democracy campaign to pressure the military to hand over power to a civilian authority.

Earlier Wednesday, the head of the military council, Gen. Abdel-Fattah Burhan, said the generals were ready to resume negotiations and that there would be “no restrictions” in talks with the leaders behind the months-long street protests.

“We open our hands to negotiations with all parties … for the interest of the nation,” Burhan said, adding that those responsible for the violent beak-up of the demonstrators’ sit-in in the capital, Khartoum, would be held accountable.

The motives for Burhan’s about-face — if sincere — were not immediately clear. Burhan had earlier cut the negotiations and canceled all agreed-on points between the military and the Forces for Declaration of Freedom and Change, an alliance which represents the protesters.

Mohammed Yousef al-Mustafa, a spokesman for the Sudanese Professionals Association, which is also part of the alliance and which is leading the demonstrations, said the protesters “totally reject” Burhan’s call.

“This call is not serious,” al-Mustafa told The Associated Press. “Burhan and those under him have killed the Sudanese and are still doing it. Their vehicles patrol the streets, firing at people.”

“We will continue in our protests, resistance, strike and total civil disobedience,” he added.

Meanwhile, the death toll in the military’s crackdown reached 60 on Wednesday, organizers said. The mounting casualties are the latest challenge to the protest movement, which now aims to show it can keep up pressure in the streets after its central rallying point — the weeks-long sit-in outside the military headquarters in Khartoum — was wiped out on Monday. 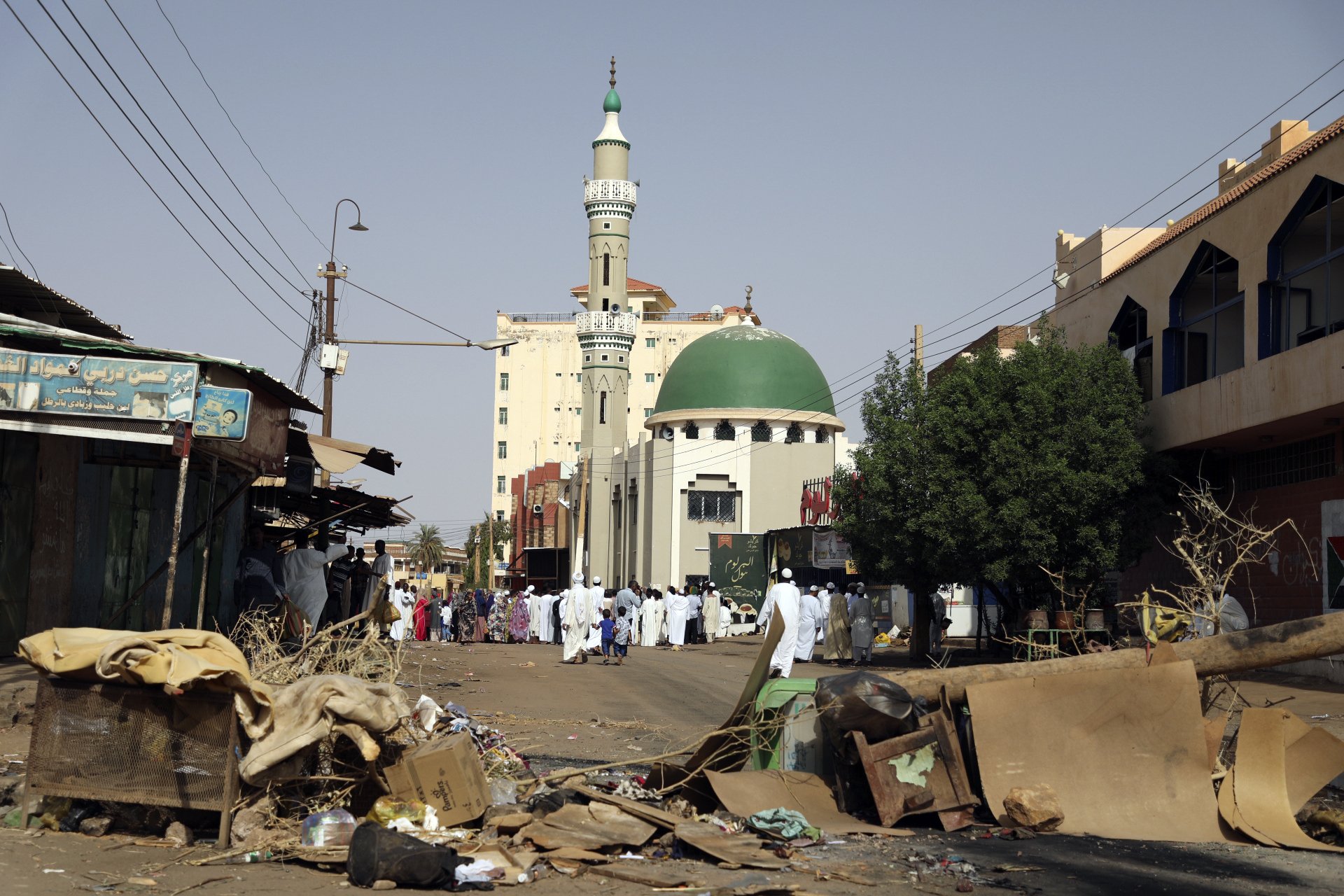 Worshippers gather at a mosque behind a roadblock set by protesters on a main street in the Sudanese capital Khartoum to stop military vehicles from driving through the area on Wednesday, June 5, 2019. The death toll in Sudan amid a violent crackdown on pro-democracy protesters and the dispersal of their peaceful sit-in earlier this week in the capital climbed on Wednesday, protest organizers said. (AP Photo)

In April, the movement succeeded in forcing the military to remove Sudan’s longtime strongman, Omar al-Bashir. It then kept its sit-in going, demanding that the generals who took power hand over authority to civilians.

The last previously reported death toll stood at 40 but the Sudan Doctors Committee said security forces killed at least 10 people on Wednesday in Khartoum and its twin city of Omdurman. That came after another 10 people were killed on Tuesday, including five in the White Nile state, three in Omdurman and two in Khartoum’s Bahri neighborhood.

The doctors’ committee, the medical arm of the Sudanese Professionals Association, also said that at least 326 people have been wounded in clashes in the past two days and that it feared the final death toll would be much higher.

Activists Mohammed Najib and Hashim al-Sudani said there were street battles late Tuesday and early Wednesday in Khartoum’s Bahri and Buri districts between protesters and security forces, mainly from the paramilitary Rapid Support Forces, or RSF.

“In Buri, there were lots of shootings and tear gas,” al-Sudani said. “They tried to force people into narrow streets” to beat them.

On Monday, members of the RSF, which human rights groups say carried out rapes, torture and killings of civilians in Sudan’s Darfur region, and other troops waded into the protest camp outside the military’s headquarters in Khartoum, opening fire and burning down tents. Other troops crushed two smaller sit-ins organized by the protesters elsewhere.

After al-Bashir’s ouster, for weeks, the military and protest leaders negotiated over the makeup of a transitional council meant to run the country for three years before elections. Protesters demand that civilians dominate the council, but the generals resisted.

The crackdown put an end to the relative peace that surrounded the talks and signaled the military had lost patience with activists’ demands, putting the two sides on the path of a potentially longer confrontation with increasing violence. 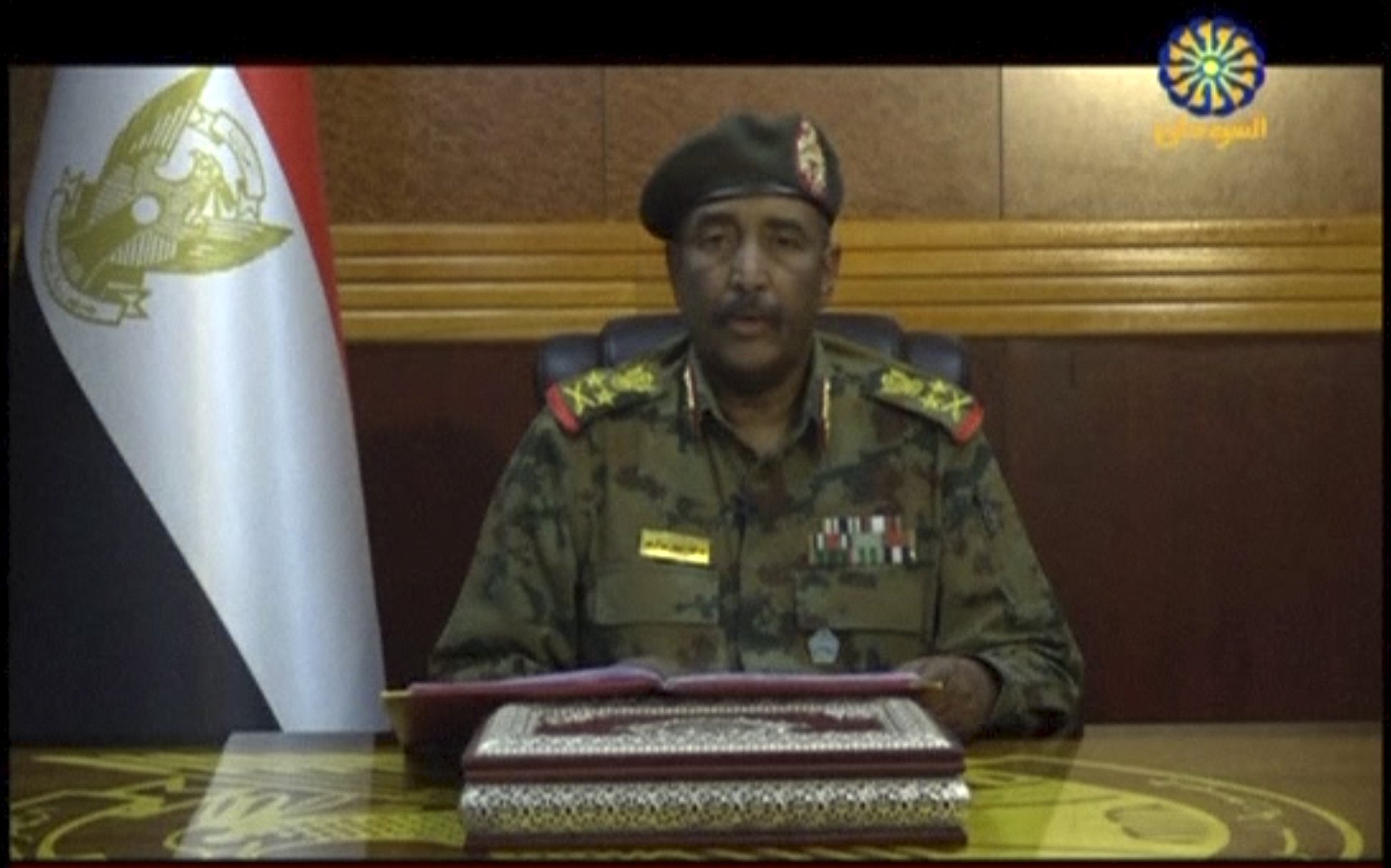 In this frame grab from video provided by Sudan TV, Lieutenant General Abdel-Fattah Burhan, head of the Sudanese Transitional Military Council, TMC, makes a broadcast announcement in Khartoum, Sudan, Tuesday, June 4, 2029. The TMC on Tuesday said that they want to stage early elections in the country and that all agreements with protest leaders have been cancelled. The statement came a day after a pro-democracy sit-in outside the army command base in the capital Khartoum was violently overrun by the ruling army. Protest organizers said 35 people died in the carnage Monday. (Sudan TV via AP)

Burhan’s call for negotiations marked a significant change from his televised speech only a day earlier, when he blamed protest leaders for the volatile situation, accusing them of drawing out negotiations and trying to exclude some “political and security forces” from taking part in any transitional government.

He also announced Tuesday that the military would unilaterally form an interim government and hold elections sooner, within seven to nine months, under international supervision. Protesters had also rejected that because it would put the military in charge of running the election.

Since Monday, tensions have remained high in Khartoum and elsewhere as demonstrators staged scattered rallies and blocked main roads with barricades. Security forces have been seen in online videos, patrolling Khartoum districts.

Madani Abbas Madani, a leading activist, said the protesters would continue an open-ended civil disobedience campaign until the overthrow of the ruling military council.

“What happened on Monday was a systematic and planned attempt to impose repression on the Sudanese people,” he said.

In a joint statement, the U.S., Norway and Britain have condemned the security forces’ crackdown. The statement, released late Tuesday, said Sudan’s military council “put the transition process and peace in Sudan in jeopardy” by ordering attacks on protesters.