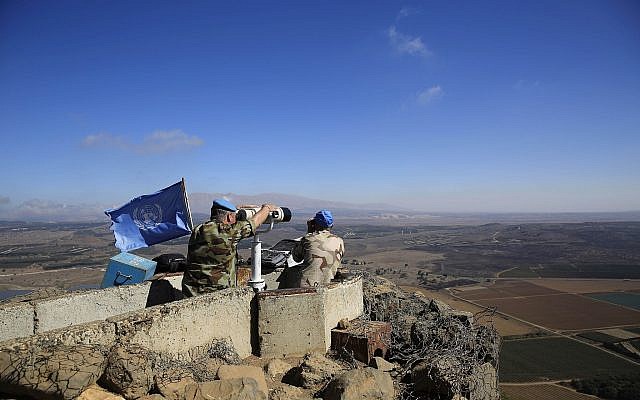 UNITED NATIONS (AP) — The United States came under sharp criticism from the 14 other Security Council nations Wednesday for its decision to recognize Israel’s sovereignty over the Golan Heights in violation of council resolutions.

Speaker after speaker at the open meeting supported Syria’s sovereignty over the strategic plateau and opposed Israel’s de facto annexation of the Golan Heights and US President Donald Trump’s proclamation earlier this week.

As South Africa’s UN Ambassador Jerry Matjila said, “this unilateral action does nothing to assist in finding a long-term peaceful solution to the conflict in the Middle East.”

He and others pointed to resolutions calling for Israel to end its occupation of the Golan Heights, including a December 1981 Security Council resolution that called Israel’s extension of Israeli law over the strategic area “null and void and without international legal effect.” 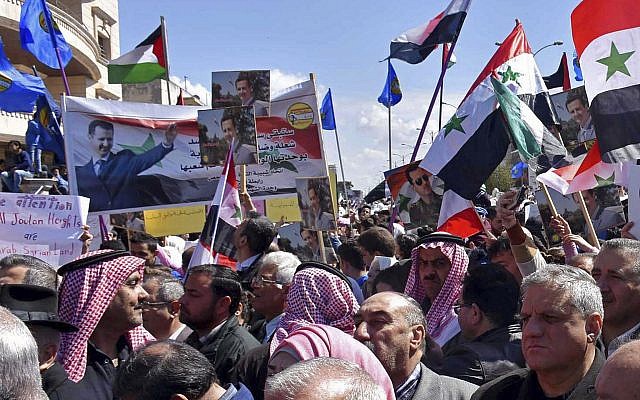 In this photo released by the Syrian official news agency SANA, Syrians hold national flags and portraits of Syrian President Bashar Assad during a protest against US President Donald Trump’s move to recognize Israeli sovereignty over the Golan Heights, in Homs, Syria, on March 26, 2019. (SANA via AP)

“If anybody feels any temptation to follow this poor example, we would urge them to refrain from this aggressive revision of international law,” Russia’s deputy ambassador Vladimir Safronkov said. 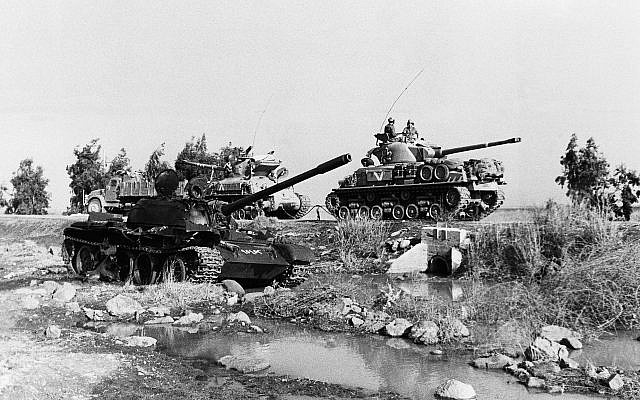 Trump’s proclamation that the Golan Heights are part of Israel raised questions about the future of UNDOF after its mandate expires on June 30.

Acting US Ambassador Jonathan Cohen told the council UNDOF has “a vital role to play in preserving stability between Israel and Syria,” an assurance that the Trump administration’s recognition of Israeli sovereignty over the strategic plateau won’t affect its operation.

He said the force’s mandate to ensure that the area of separation between Syria and Israel “is a buffer zone free from any military presence or activities” is of “critical strategic and security importance” to Israel, and “can contribute to the stability of the entire Middle East.”

Cohen said US recognition that the Golan Heights are part of Israel doesn’t affect the 1974 cease-fire agreement, “nor do we believe that it undermines UNDOF’s mandate in any way.” 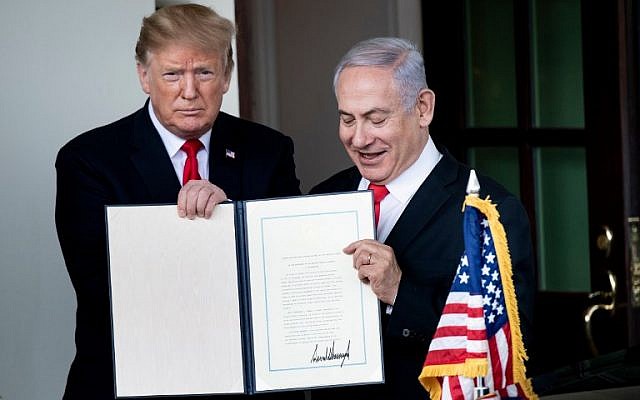 US President Donald Trump (L) and Prime Minister Benjamin Netanyahu hold up a Golan Heights proclamation outside the West Wing after a meeting at the White House on March 25, 2019, in Washington. (Brendan Smialowski/AFP)

He strongly criticized “the daily presence of the Syrian armed forces” in the area of separation, where UNDOF is the only military force allowed, calling their presence a violation of the 1974 cease-fire agreement.

The United States calls on Russia to use its influence with President Bashar Assad “to compel the Syrian forces to uphold their commitment” to the cease-fire agreement “and immediately withdraw from the area of separation,” Cohen said.

UN peacekeeping chief Jean Pierre Lacroix told the council there is “a continued significant threat” to UNDOF personnel from explosive remnants of war, “and from the possible presence of sleeper cells of armed groups including (UN) listed terrorist groups.”

Undersecretary-General Rosemary DiCarlo expressed hope that “the recent developments will not be used as an excuse by anyone to pursue actions that could undermine the relative stability of the situation on Golan and beyond.”