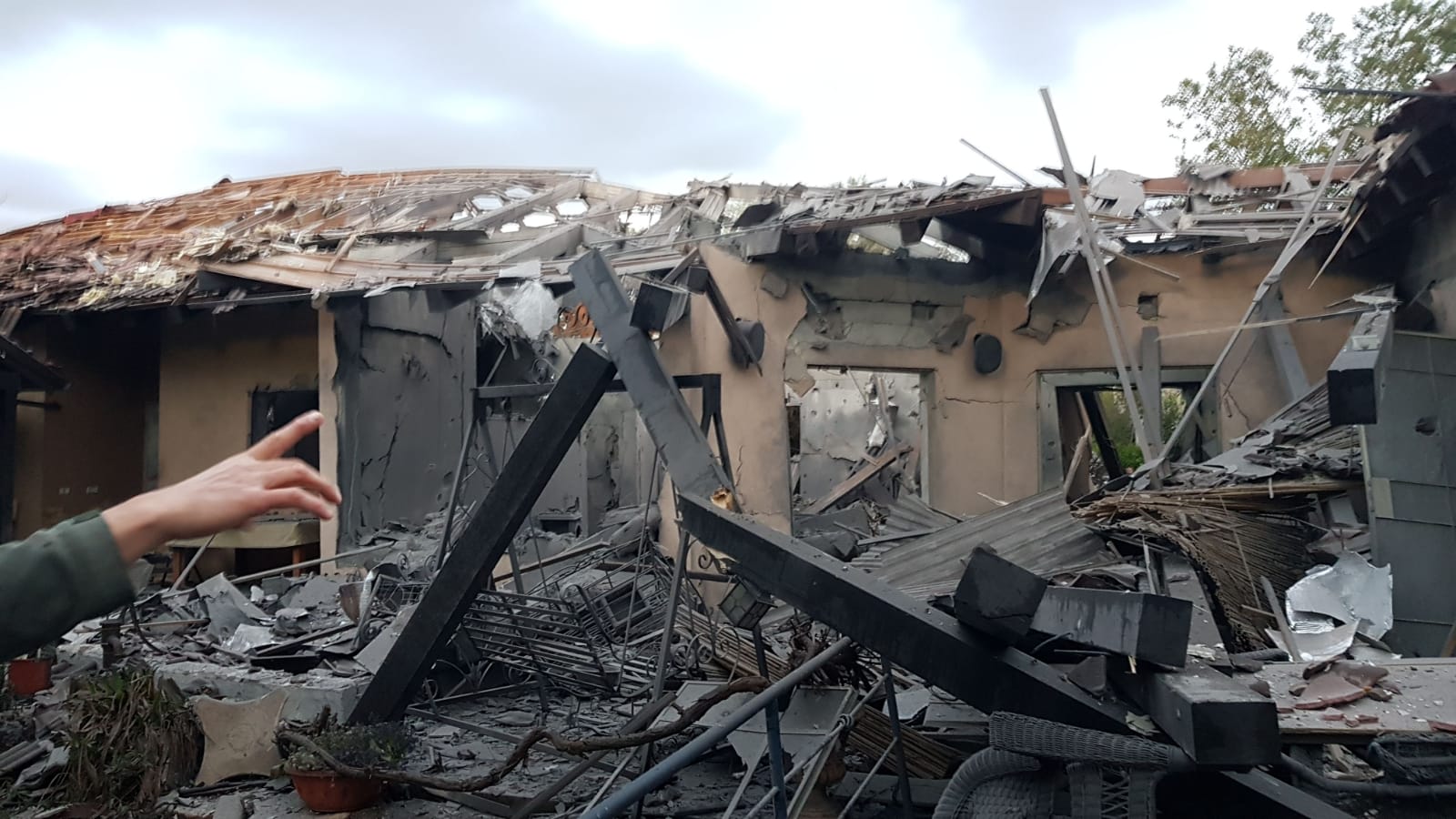 A home in the central Israeli town of Mishmeret, which was destroyed in a rocket attack from the Gaza Strip on March 25, 2019. (courtesy)

One projectile directly hits residential building in the Sharon region, leveling it and starting fire; army investigating who’s behind the launch

The attack triggered air raid sirens at approximately 5:20 a.m. throughout the Sharon and Emek Hefer regions north of Tel Aviv, the army said.

According to the military, the rocket was fired from the Gaza Strip, where earlier this month two rockets were also fired at Tel Aviv, in what was described at the time as an apparent “mistake” by the Hamas terror group.

The Iron Dome missile defense system did not appear to have been activated by the rocket attack. The military said it was still investigating the matter.

Police said the projectile early Monday struck a residential building in the community of Mishmeret, on the Sharon plain, causing it to catch fire. The shrapnel from the rocket attack also caused significant damage to the surrounding area, as fragments hit a gas tank outside the building.

Drone footage of the site showed that the majority of the structure, which contained two housing units, had been flattened by the strike.

There are fears that violence will ramp up this week, with Hamas hoping to draw hundreds of thousands of rioters to the fence over the weekend to mark a year of so-called March of Return protests, which began March 30, 2018.

Firefighters and search-and-rescue workers arrived at the scene to extinguish the blaze caused by the rocket and look for any survivors who might be trapped in the destroyed building, the fire department said.

The rocket is believed to have been fired from the Rafah area in southern Gaza, approximately 100 kilometers (60 miles) from Mishmeret, making it the farthest reaching attack from the enclave since the 2014 Gaza war, during which projectiles reached as far north as the city of Haifa. 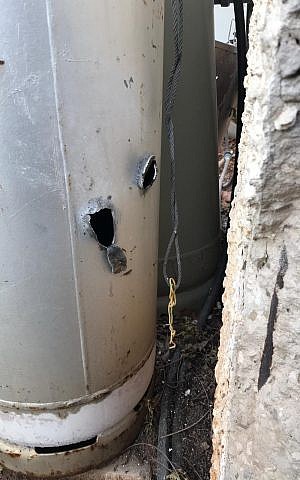 A home in the central Israeli town of Mishmeret, which was destroyed in a rocket attack from the Gaza Strip on March 25, 2019. (Fired and Rescue Services)

The distance of the attack and significant damage caused by the impact indicated that it was conducted by one of the larger terror groups in Gaza — either the Strip’s de facto rulers Hamas or the Iran-backed Palestinian Islamic Jihad — who have access to the types of long-range projectiles with heavy warheads necessary for such an attack.

Initial assessments of the attack indicated that a domestically produced rocket known as a J80 was likely used in the attack though this has yet to be confirmed.

As of 8 a.m. Monday, no terror groups in the enclave have taken responsibility for the rocket launch.

The Israeli military said it was investigating the source of the rocket attack.

There were no immediate reports of an Israeli military response.

Palestinian media reported that terror groups in the Strip began evacuating their positions and bases ahead of the Israeli airstrikes that were expected to follow the rocket attack.

Israel shuttered the Kerem Shalom and Erez crossings into the Gaza Strip on Monday morning, the Defense Ministry said.

Prime Minister Benjamin Netanyahu, who is currently in the United States for the AIPAC conference, was informed of the attack and planned to discuss the matter with the IDF chief of staff, national security adviser and other senior defense officials.

Netanyahu’s office said the prime minister was cutting his US trip short and returning to Israel in light of the attack, following a meeting with American President Donald Trump.

“There was a criminal attack on the State of Israel, and we will respond forcefully,” Netanyahu said in a statement.

“In a few hours, I will meet with President Trump and immediately afterwards I will return to Israel in order to oversee our activities.”

According to the Magen David Adom ambulance service, at least seven people who lived in the building were injured in the attack.

The injured were all members of the Wolf family, who lived in two housing units connected by a hallway. They were taken to Kfar Saba’s Meir Medical Center for treatment.

Several others in the area were treated for anxiety attacks and light injuries from falling while running to bomb shelters. 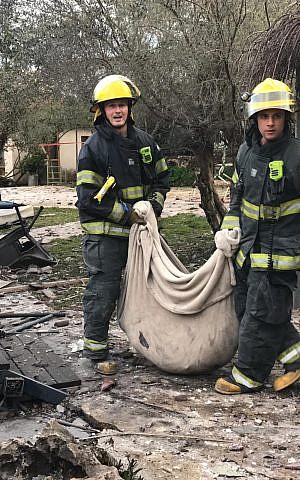 A home in the central Israeli town of Mishmeret, which was destroyed in a rocket attack from the Gaza Strip on March 25, 2019. (Fired and Rescue Services)

Two dogs belonging to the family were also killed in the rocket strike.

Schools in the Sharon region opened as usual Monday despite the attack, though the Education Ministry said teachers would hold a special session with students to discuss the issue.

Recent weeks have seen escalating tensions in the Gaza Strip, as its de facto rulers the Hamas terror group feuds with both Israel and the West Bank-based Palestinian Authority. Domestically, the terror group has also faced protests and increased criticism as humanitarian conditions in the Strip continue to deteriorate.

On March 14, two rockets from the Gaza Strip were fired at Tel Aviv, landing in open areas and causing no direct injury. In response, Israeli war planes hit over 100 Hamas targets in the Gaza Strip later that night.

The following day, after a brief exchange of fire, both sides reportedly agreed to a ceasefire.

Israeli officials later said the Hamas rocket launch appeared to have been a “mistake” caused by low-level operatives accidentally pressing a launch button on projectiles that were preemptively aimed at Tel Aviv for use in future conflicts — though this explanation was not universally accepted in Jerusalem.

In the 11 days since the rocket attacks on Tel Aviv, terror groups in the Strip have stepped up violence along the Gaza border, launching dozens of balloon-borne incendiary and explosive devices into southern Israel and conducting nightly riots along the security fence that are meant to disrupt the lives of Israeli civilians living near Gaza and the soldiers stationed there.

On Sunday night, an Israeli tank targeted two Hamas posts along the Gaza border, following a number of cross-border attacks throughout the day, the military said.

That afternoon, a shepherd was lightly injured by a balloon-borne incendiary device flown, into southern Israel from the Gaza Strip, local authorities said.

A short while later, an explosive device that was also apparently flown into southern Israel from the Gaza Strip detonated in a community in the Sha’ar Hanegev region, causing neither injury nor damage, a regional spokesperson said.

On Saturday night, Israeli military aircraft bombed Hamas targets in Gaza after a rocket alarm sounded in some Israeli communities bordering the Strip, triggered by a powerful improvised bomb thrown at the border during late-night riots.

A Palestinian was killed by Israeli fire during the clashes early Sunday, authorities in the Strip said. The 24-year-old man was fatally shot in the chest and two others were wounded, the Hamas-run health ministry said. 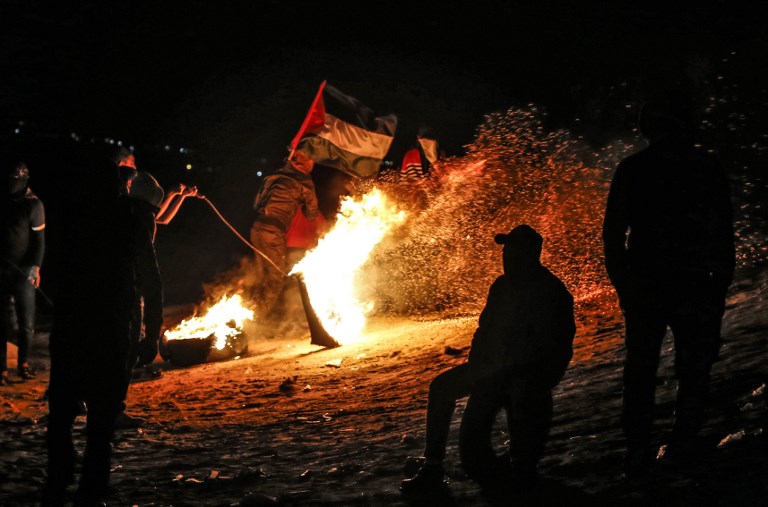 Palestinian protesters take part in a night demonstration near the fence along the border with Israel, in Rafah in the southern Gaza Strip, on March 19, 2019. (SAID KHATIB / AFP)

Israel says the demonstrations are orchestrated by Hamas in order to provide cover for the organization’s nefarious activities along the security fence, including infiltration attempts, the planting of explosives and attacks on Israeli soldiers.

Their organizers have said the protests aim to achieve the “return” of Palestinian refugees and their descendants to lands that are now part of Israel, and pressure the Jewish state to lift its restrictions on the movement of people and goods into and out of the coastal enclave.

Israeli officials say the return of Palestinian refugees and their descendants would destroy Israel’s Jewish character. They also maintain that the restrictions on movement are in place to prevent Hamas and other terrorist groups from smuggling weapons into the Strip.