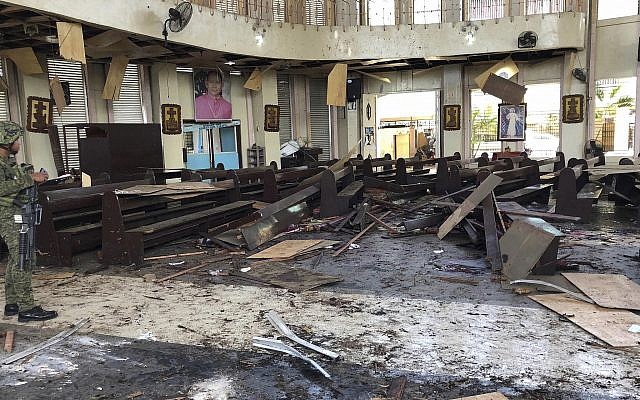 Witnesses said the first blast inside the Jolo cathedral in the provincial capital sent churchgoers, some of them wounded, to stampede out of the main door. Army troops and police posted outside were rushing in when the second bomb went off about one minute later near the main entrance, causing more deaths and injuries. The military was checking a report that the second explosive device may have been attached to a parked motorcycle.

The initial explosion scattered the wooden pews inside the main hall and blasted window glass panels, and the second bomb hurled human remains and debris across a town square fronting the Cathedral of Our Lady of Mount Carmel, witnesses said. Cellphone signal was cut off in the first hours after the attack. The witnesses who spoke to The Associated Press refused to give their names or were busy at the scene of the blasts.

Police said at least 20 people died and 81 were wounded, correcting an earlier toll due to double counting. The fatalities included 15 civilians and five troops. Among the wounded were 14 troops, two police and 65 civilians. 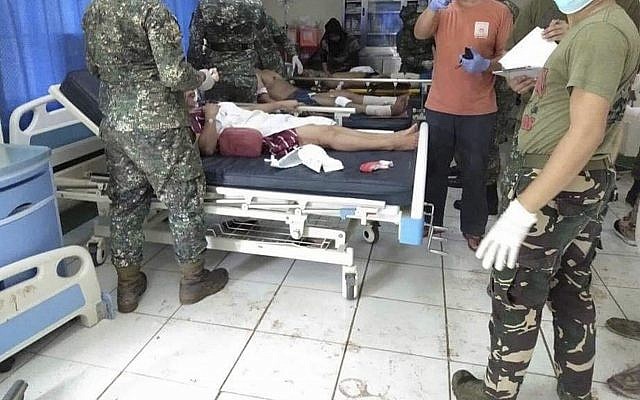 Bomb victims receive treatment in a hospital after two bombs exploded outside a Roman Catholic cathedral in Jolo, the capital of Sulu province in southern Philippines where jihadists are active January 27, 2019. (WESMINCOM Armed Forces of the Philippines Via AP)

Troops in armored carriers sealed off the main road leading to the church while vehicles transported the dead and wounded to the town hospital. Some casualties were evacuated by air to nearby Zamboanga city.

“I have directed our troops to heighten their alert level, secure all places of worships and public places at once, and initiate pro-active security measures to thwart hostile plans,” said Defense Secretary Delfin Lorenzana in a statement.

“We will pursue to the ends of the earth the ruthless perpetrators behind this dastardly crime until every killer is brought to justice and put behind bars. The law will give them no mercy,” the office of President Rodrigo Duterte said in Manila.

It said that “the enemies of the state boldly challenged the government’s capability to secure the safety of citizens in that region. The (Armed Forces of the Philippines) will rise to the challenge and crush these godless criminals.” 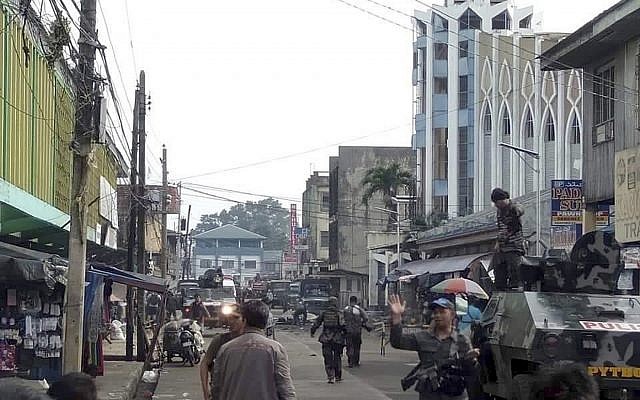 Jolo island has long been troubled by the presence of Abu Sayyaf militants, who are blacklisted by the United States and the Philippines as a terrorist organization because of years of bombings, kidnappings and beheadings. A Catholic bishop, Benjamin de Jesus, was gunned down by suspected terrorists outside the cathedral in 1997.

No one has immediately claimed responsibility for the latest attack.

It came nearly a week after minority Muslims in the predominantly Roman Catholic nation endorsed a new autonomous region in the southern Philippines in hopes of ending nearly five decades of a separatist rebellion that has left 150,000 people dead. Although most of the Muslim areas approved the autonomy deal, voters in Sulu province, where Jolo is located, rejected it. The province is home to a rival rebel faction that’s opposed to the deal as well as smaller militant cells that not part of any peace process.

Western governments have welcomed the autonomy pact. They worry that small numbers of Islamic State-linked jihadists from the Middle East and Southeast Asia could forge an alliance with Filipino insurgents and turn the south into a breeding ground for extremists. 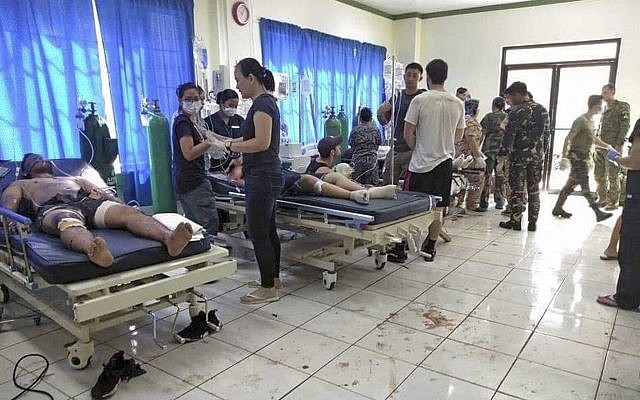 “This bomb attack was done in a place of peace and worship, and it comes at a time when we are preparing for another stage of the peace process in Mindanao,” said Gov. Mujiv Hataman of the Autonomous Region in Muslim Mindanao. “Human lives are irreplaceable,” he added, calling on Jolo residents to cooperate with authorities to find the perpetrators of this “atrocity.”

Security officials were looking “at different threat groups and they still can’t say if this has something to do with the just concluded plebiscite,” Albayalde, the national police chief, told ABS-CBN TV network.

Aside from the small but brutal Abu Sayyaf group, other terror groups in Sulu include a small band of young jihadis aligned with the Islamic State group, which has also carried out assaults, including ransom kidnappings and beheadings.

Abu Sayyaf militants are still holding at least five hostages — a Dutch national, two Malaysians, an Indonesian and a Filipino — in their jungle bases mostly near Sulu’s Patikul town, not far from Jolo.

Government forces have pressed on sporadic offensives to crush the terrorists, including those in Jolo, a poverty-wracked island of more than 700,000 people. A few thousand Catholics live mostly in the capital of Jolo.

There have been speculations that the bombings may be a diversionary move by Islamist militants after troops recently carried out an offensive that killed a number of IS-linked extremists in an encampment in the hinterlands of Lanao del Sur province, also in the south. The area is near Marawi, a Muslim city that was besieged for five months by hundreds of IS-aligned terrorists, including foreign fighters, in 2017. Troops quelled the insurrection, which left more 1,100 mostly militants dead and the heartland of the mosque-studded city in ruins.