A protester wearing a Guy Fawkes mask makes the ‘Victory’ sign during a protest of the Yellow Vests against rising oil prices and living costs, on December 1, 2018, in Paris. (AFP/Abdulmonam Eassa)

PARIS, France (AFP) — The Eiffel Tower, the Louvre museum and scores of shops on the Champs-Elysees are set to close as authorities warned Thursday of fresh violence this weekend during protests which have ballooned into the biggest crisis of Emmanuel Macron’s presidency.

The government is scrambling to stave off another Saturday of burned cars and running street battles with police by “yellow vest” protesters furious over rising costs of living they blame on high taxes.

An interior ministry official told AFP that authorities were bracing for “significant violence” on Saturday, based on indications that protesters on both the far right and far left are planning to converge on the capital.

Officials fear they could be joined by hooligans set on rioting and looting, as is widely thought to have been the case last weekend.

Prime Minister Edouard Philippe said 8,000 police would be deployed in Paris alongside a dozen armored vehicles — not used in urban areas since suburban youth riots in 2005 — for crowd control as part of “exceptional” measures to contain the risk of violence.

He also reiterated his appeal for calm, saying in a prime-time TV interview that the government was ready to consider “any measure which would allow us to boost spending power.” 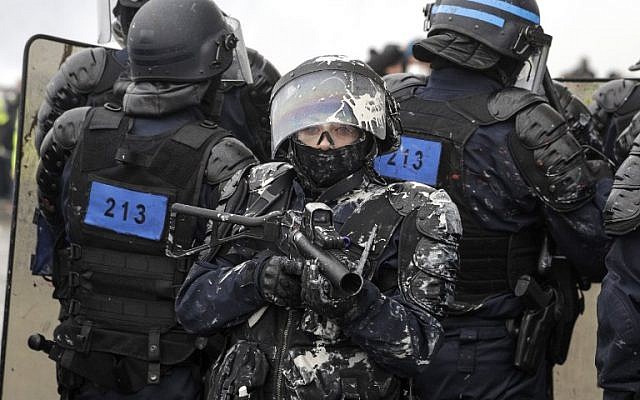 Policemen seen during a protest of the ‘yellow vests’ (Gilets jaunes) against rising oil prices and living costs on the Champs Elysees, near the Eiffel Tower, in Paris, France, on December 1, 2018. (AFP/Geoffroy van der Hasselt)

Across the country some 89,000 police will be mobilized, up from 65,000 last weekend, when the country was rocked by daylong scenes of urban unrest in Paris.

But so far the “yellow vest” movement shows no signs of losing steam, despite the government’s rollback of planned fuel tax hikes for January, one of the protesters’ core demands.

Shops and businesses along and near the famous Champs-Elysees were told to keep their doors closed, protect exposed windows and remove outdoor furniture, according to police notices seen by AFP.

The move is likely to cost thousands of euros in lost revenue as tourists and locals stay clear for a second holiday weekend in a row.

Both the Garnier and Bastille opera houses have canceled performances on Saturday and the doors of major museums will be shut. 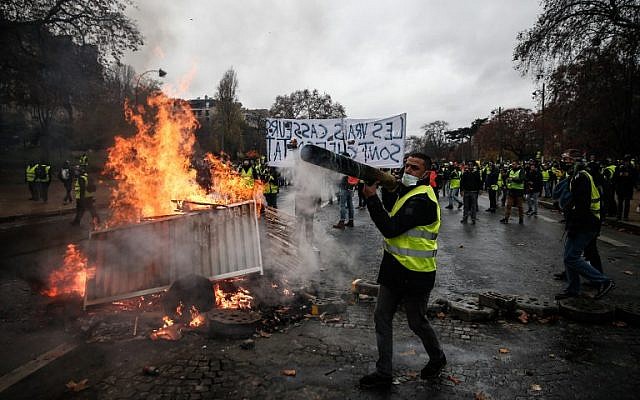 Protesters build a barricade during a protest in Paris, France, of the ‘yellow vests’ against rising oil prices and living costs, on December 1, 2018. (AFP/Abdulmonam Eassa)

The “yellow vest” protests began on November 17 in opposition to rising fuel taxes, but they have since expanded into a broad challenge to Macron’s pro-business agenda and style of governing.

The protesters, mainly from small-town and rural France, have broad public support, with an opinion poll this week showing 72 percent backed the demonstrations despite last weekend’s violence.

The movement has spurred other protests, in particular students demanding an end to testing overhauls and stricter university entrance requirements.

Nearly 280 high schools were disrupted, 45 of which were blocked, in protests across France on Thursday, with more than 700 students detained by police, an interior ministry source told AFP.

“We’re the ones who are going to eventually have to pay higher fuel prices,” said Ines, one of around 150 high school students demonstrating in the southern Paris suburb of Cachan. 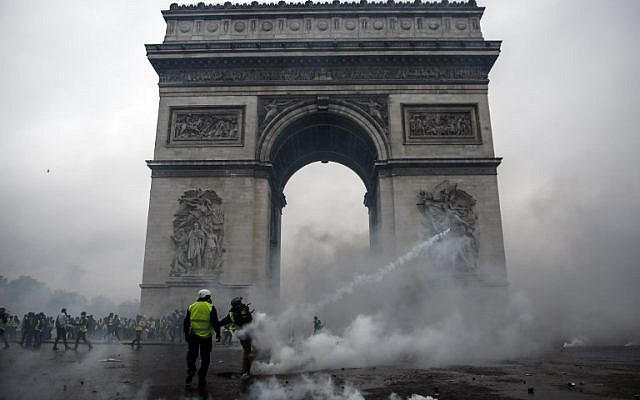 Demonstrators clash with riot police at the Arc de Triomphe during a protest of the ‘yellow vests’ against rising oil prices and living costs, on December 1, 2018 in Paris. (AFP/Abdulmonam Eassa)

Farmers have also called for demonstrations every day next week, while two truck driver unions plan an indefinite sympathy strike from Sunday night.

Political leaders from across the spectrum have appealed for calm, after four people died in accidents during protests and hundreds have been injured.

On Thursday a “yellow vest” representative, Benjamin Cauchy, called on Macron to meet a delegation of protesters Friday to help defuse a situation that he said had brought the country “to the brink of insurrection and civil war.”

“We’re asking him to meet us to negotiate on spending power, which is what underpins all this anger,” Cauchy told AFP.

Macron, whose approval ratings are down to just 23 percent, will speak about the issue “early next week”, Richard Ferrand, a senior MP from the president’s party, said late Thursday.

The French leader, who has not commented publicly since Saturday on the deepest crisis of his presidency so far, did not want to “pour oil on the fire” ahead of Saturday’s protest, Ferrand told AFP.

Members of Macron’s government have signaled they are ready to make further concessions. 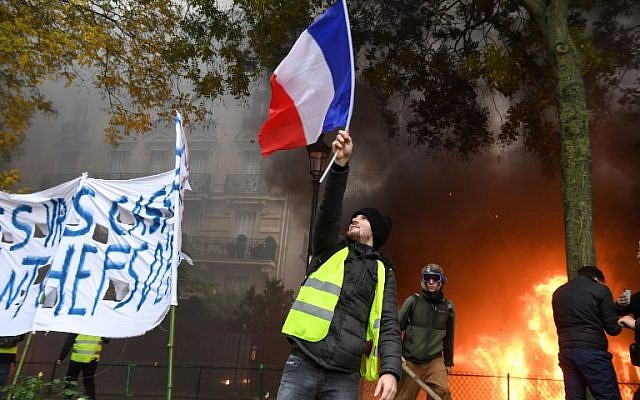 A demonstrator holds a French flag during a protest of the ‘yellow vests’ (Gilets jaunes) against rising oil prices and living costs, in Paris, on December 1, 2018. (AFP/Alain Jocard)

But Macron’s office said he would stick to his decision to cut a “fortune tax” on high-earners, which the former investment banker abolished last year.

Restoring the wealth tax has become a core demand of the “yellow vests,” alongside the fuel tax rollback and an increase in the minimum wage.