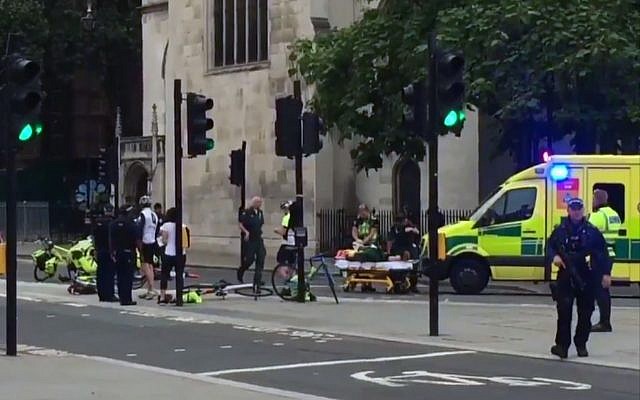 In this frame grab provided by UK Newsflare, emergency services attend the wounded after a car crashed into security barriers outside the Houses of Parliament in London, August 14, 2018. (UK Newsflare via AP)

A motorist in his 20s slammed into pedestrians and cyclists near Britain’s Houses of Parliament, and was arrested on suspicion of terrorist offenses after the silver Ford Fiesta he was driving hit rush-hour commuters before slamming into a barrier.

“Another terrorist attack in London,” Trump responded on Twitter. “These animals are crazy and must be dealt with through toughness and strength!”

British Prime Minister Theresa May, currently on holiday in Switzerland, tweeted that her “thoughts are with those injured in the incident in Westminster.” 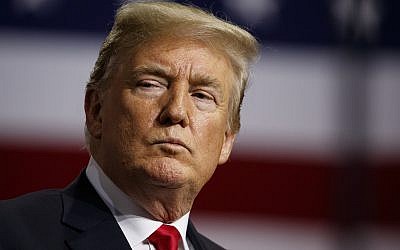 Government officials were to hold a meeting of the COBRA emergency committee at 2:00 p.m. (local time).

“At this stage, we are treating this as a terrorist incident,” Scotland Yard said after the attack, adding that none of the injuries were believed to be life-threatening.

Armed police cordoned off streets surrounding the heart of Britain’s government. Police appealed to the public to stay away, and the Westminster subway station was closed.

Later images showed police holding the driver, dressed in jeans and a black puffer jacket, in handcuffs as roads around parliament were sealed off.

“The driver of the car, a man in his late 20s… was arrested on suspicion of terrorist offenses,” said police.

“There was nobody else in the vehicle, which remains at the scene and is being searched. No weapons have been recovered at this stage.”

Police have yet to identify the suspect, who was not cooperating with detectives, according to Metropolitan Police Assistant Commissioner Neil Basu.

Government officials will hold a meeting of the emergency Cobra committee at 2.00 pm.

“I was walking on the other side. I heard some noise and someone screamed,” she said. “I turned around and I saw a silver car driving very fast close to the railings, maybe even on the pavement. I think it looked intentional — the car drove at speed and towards the barriers.”

“It looked deliberate. It didn’t look like an accident,” he said. “How do you do that by accident? It was a loud bang.”

Mayor of London Sadiq Khan said “all Londoners, like me, utterly condemn all acts of terrorism on our city.

“The response of Londoners today shows that we will never be cowed, intimidated or divided by any terrorist attack,” he said.

The incident heightened tensions in a city that has seen four vehicle-based terror attacks in less than 18 months. 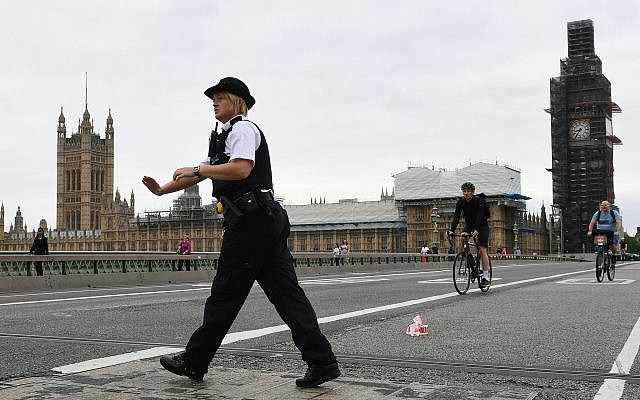 A police woman patrols on Westminster Bridge after a car crashed into security barriers outside the Houses of Parliament, in London, August 14, 2018. (Stefan Rousseau/PA via AP)

Westminster was the scene of a terror attack last year, when Khalid Masood, a 52-year-old British convert to Islam, drove a car at pedestrians on a bridge over the River Thames, before fatally stabbing a policeman on guard outside parliament. The attack left five people dead and around 50 injured, and only ended when police shot Masood dead.