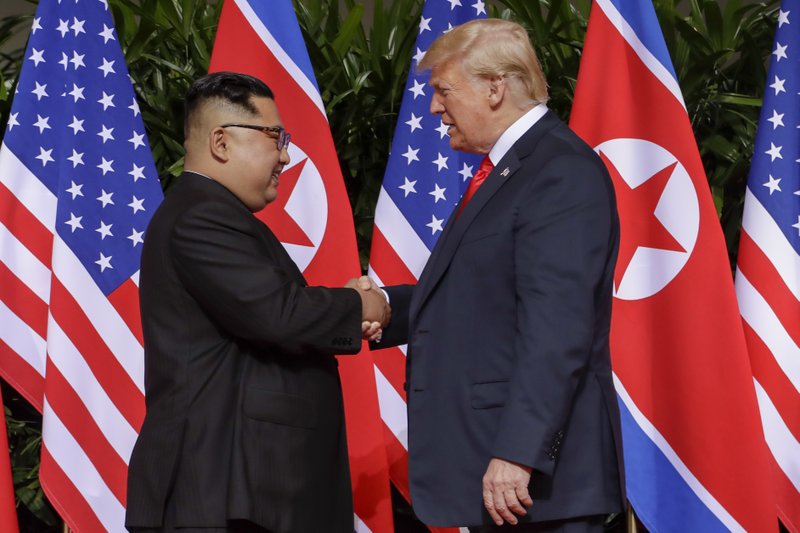 SINGAPORE (AP) — Clasping hands and forecasting future peace, President Donald Trump and Kim Jong Un committed Tuesday to “complete denuclearization” of the Korean Peninsula during the first meeting in history between a sitting U.S. president and a North Korean leader. Yet as Trump toasted the summit’s results, he faced mounting questions about whether he got too little and gave away too much — including an agreement to halt U.S. military exercises with treaty ally South Korea.

Meeting with staged ceremony on a Singapore island, Trump and Kim came together for a summit that seemed unthinkable months ago when the two nations traded nuclear threats. The gathering of the two unpredictable leaders marked a striking gamble by the American president to grant Kim long-sought recognition on the world stage in hopes of ending the North’s nuclear program.

Both leaders expressed optimism throughout roughly five hours of talks, with Trump thanking Kim afterward “for taking the first bold step toward a bright new future for his people.” Kim, for his part, said the leaders had “decided to leave the past behind” and promised: “The world will see a major change.” 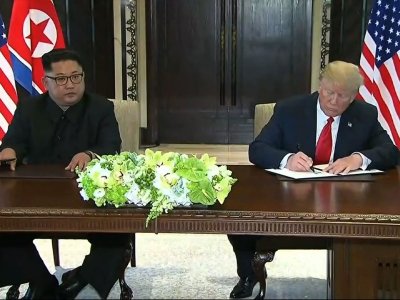 Soon, Kim was on a plane headed home, while a clearly ebullient Trump held forth for more than an hour before the press on what he styled as a historic achievement to avert the prospect of nuclear war. Along the way, Trump tossed out pronouncements on U.S. alliances, human rights, and the nature of the accord that he and Kim had signed.

Light on specifics, the agreement largely amounted to an agreement to continue discussions, as it echoed previous public statements and past commitments. It did not, for instance, include an agreement to take steps toward ending the technical state of warfare between the U.S. and North Korea.

Nor did it include a striking concession by Trump, who told reporters he would freeze U.S. military “war games” with ally South Korea while negotiations between the U.S. and the North continue. Trump cast the decision as a cost-saving measure, but also called the exercises “inappropriate” while talks continue. North Korea has long objected to the drills as a security threat.

It was unclear whether South Korea was aware of Trump’s decision before he announced it publicly. U.S. Forces Korea said in a statement Tuesday it was unaware of any policy change. Trump phoned South Korean President Moon Jae-in after leaving Singapore to brief him on the discussions.

Trump also said he’d obtained a separate concession from Kim to demolish a missile engine testing site, though it was just one site of many connected to the nuclear program.

As Trump took a victory lap on the world stage, experts and allies struggled to account for what Trump and Kim had agreed to — and whether this agreement could actually be the first of its kind not to be broken by the North Koreans.

The details of how and when the North would denuclearize appear yet to be determined, as are the nature of the unspecified “protections” Trump is pledging to Kim and his government.

During his press conference, Trump acknowledged that denuclearization won’t happen overnight, but said, “once you start the process it means it’s pretty much over.”

North Korea is believed to possess more than 50 nuclear warheads, with its atomic program spread across more than 100 sites constructed over decades to evade international inspections. Trump insisted that strong verification of denuclearization would be included in a final agreement, saying it was a detail his team would begin sorting out with the North Koreans next week.

The agreement’s language on North Korea’s nuclear program was similar to what the leaders of North and South Korea came up with at their own summit in April. At the time, the Koreans faced criticism for essentially kicking the issue of North Korea’s nuclear arsenal down the road to the Singapore summit. Trump and Kim even directly referred back to the so-called Panmunjom Declaration, which contained a weak commitment to denuclearization and no specifics on how to achieve it.

Between handshakes, a White House invitation, and even an impromptu tour of “The Beast,” the famed U.S. presidential limousine known for its high-tech fortifications, Trump sought to build a personal connection with Kim and said they have a “very good” relationship.

The U.S. president brushed off questions about his public embrace of the autocrat whose people have been oppressed for decades. He added that Otto Warmbier, an American who died last year just days after his release from imprisonment in North Korea, “did not die in vain” because his death brought about the nuclear talks.

In the run-up to Tuesday’s historic face-to-face with Kim, Trump has appeared unconcerned about the implications of feting an authoritarian leader accused by the U.S. of ordering the public assassination of his half brother with a nerve agent, executing his uncle by firing squad and presiding over a notorious gulag estimated to hold 80,000 to 120,000 political prisoners.

In their joint statement, the two leaders promised to “build a lasting and stable peace regime” on the Korean Peninsula. Trump has dangled the prospect of economic investment in the North as a sweetener for giving up its nuclear weapons. The longtime property developer-turned-politician later mused about the potential value of condos on the country’s beachfront real estate.

The formal document-signing, which also included an agreement to work to repatriate remains of prisoners of war and those missing in action from the Korean War, followed a series of meetings at a luxury Singapore resort.

Ahead of the meeting Trump had predicted the two men might strike a nuclear deal or forge a formal end to the Korean War in the course of a single meeting or over several days. But in the hours before the summit, the White House unexpectedly announced Trump would depart Singapore earlier than expected — Tuesday evening — raising questions about whether his aspirations for an ambitious outcome had been scaled back.

Aware that the eyes of the world were on a moment many people never expected to see, Kim said many of those watching would think it was a scene from a “science fiction movie.”

Critics of the summit leapt at the leaders’ handshake and the moonlight stroll Kim took Monday night along the glittering Singapore waterfront, saying it was further evidence that Trump was helping legitimize Kim on the world stage.

“It’s a huge win for Kim Jong Un, who now — if nothing else — has the prestige and propaganda coup of meeting one on one with the president, while armed with a nuclear deterrent,” said Michael Kovrig, a northeast Asia specialist at the International Crisis Group in Washington.

Trump responded that he embracing diplomacy with Kim in hopes of saving as many as 30 million lives.

The Trump administration has repeatedly said it would not tolerate a North Korea capable of hitting the continental U.S. with a nuclear weapon — and has threatened to use military force if necessary. Trump repeatedly declined to state what the consequences would be for Kim if he, as his nation has in the past, backed out on his commitment to denuclearize. But he repeated statistics warning of massive casualties.

The optimistic summit was a remarkable change in dynamics from less than a year ago, when Trump was threatening “fire and fury” against Kim, who in turn scorned the American president as a “mentally deranged U.S. dotard.” Beyond the impact on both leaders’ political fortunes, the summit could shape the fate of countless people — the citizens of impoverished North Korea, the tens of millions living in the shadow of the North’s nuclear threat, and millions more worldwide.

The North has faced crippling diplomatic and economic sanctions as it has advanced development of its nuclear and ballistic missile programs. Pompeo held firm to Trump’s position that sanctions will remain in place until North Korea denuclearizes — and said they would even increase if diplomatic discussions did not progress positively.