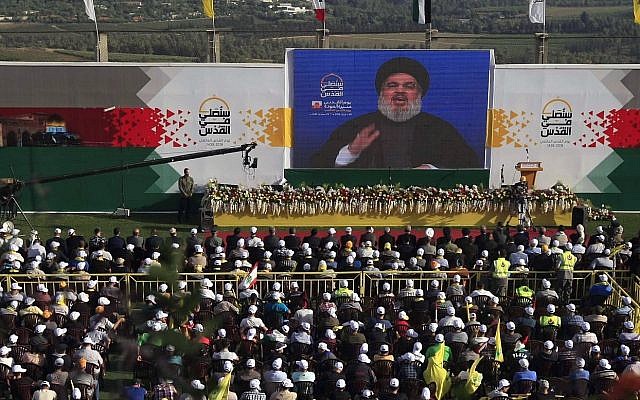 Hezbollah supporters listen to leader Hassan Nasrallah deliver a speech on a giant TV screen from a secret location, during a rally to mark al-Quds Day, at the village of Maroun el-Rass on the Lebanon-Israel border, south Lebanon, Friday, June 8, 2018 (AP Photo/Mohammed Zaatari)

Terror group’s leader says it does not want to throw Jews into the sea, but urges ‘Get on your planes and boats and go back to the countries you came from’

(SOURCE)   The leader of Lebanon’s Hezbollah terror group said Friday his men will not leave Syria even if the whole world tries to force them to do so, adding that only a request from the Syrian government would prompt such a move.

Hassan Nasrallah said Israel had for years hoped for Syrian leader Bashar Assad to fall. Now that such a ambition seems unlikely, he said, Israel has set a new goal — to drive Iran and Hezbollah out of Syria.

Nasrallah also threatened Israelis, saying, “The day of the great war is coming.”

Nasrallah’s comments came during a televised speech he gave to hundreds of supporters who gathered in the village of Maroun el-Ras on Lebanon’s border with Israel to mark Quds Day.

The close ally of Iran said Israeli claims that Iran is planning to resume uranium enrichment to wipe out six million Jews in Israel were lies. Iran and its allies don’t want to kill Jews, he claimed.

“We do not want to destroy or kill or throw anyone into the sea,” he said. “Get on your planes and boats and go back to the countries you came from.”

But “if you insist on the occupation, the day of the great war is coming, the day we will all pray in Jerusalem.”

He said Palestinians had shown they “will not give up Jerusalem, the Al-Aqsa Mosque, Palestine, and the right of return” despite all outside pressure.

“And this people after 70 years of displacement and sacrifices is growing in presence and strength,” he added.

Israel has said it will not agree to the forces of Iran and Hezbollah entrenching themselves in southern Syria along its border.

Recent weeks have seen reports of talks between Russia and Israel on the matter, in an effort to reach an agreement. 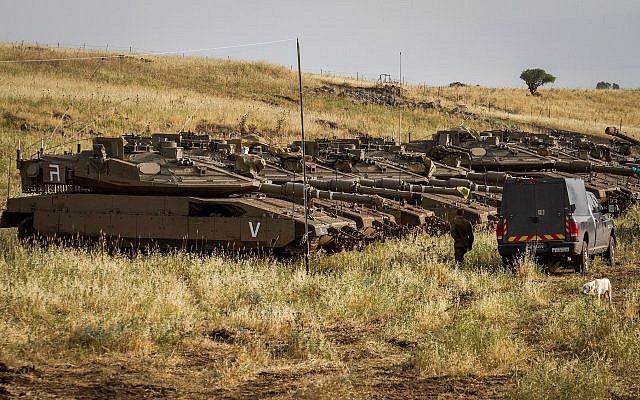 Israeli soldiers seen beside tanks near the Israeli-Syrian border in the Golan Heights on May 10, 2018. (Basel Awidat/Flash90)

Israeli officials have denied claims by Russia’s ambassador to the UN that Moscow has reached an agreement with Jerusalem on the withdrawal of Iranian forces from southern Syria.

A senior Israeli official told Channel 10 new last week that Prime Minister Benjamin Netanyahu made clear to Russian President Vladimir Putin during a phone conversation that Jerusalem wants Iranian forces — including Hezbollah and other Shiite militias — entirely out of Syria, and not just the southwestern region closest to the Jewish state.

The Britain-based Syrian Observatory for Human Rights said last week that Iranian advisers and Hezbollah fighters will be withdrawing from the southern regions of Daraa and Quneitra near Israel’s Golan Heights. But Iranian officials have denied those claims. 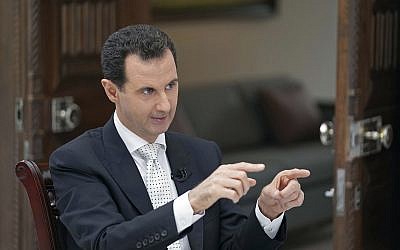 Syrian President Bashar Assad speaks during an interview with the Greek Kathimerini newspaper, in Damascus, Syria, in this photo released May 10, 2018. (SANA via AP)

Iran has asserted it has no combat troops in Syria, and that its military officials are only serving there in an advisory capacity.

Israel has repeatedly vowed to prevent Iran from establishing a permanent presence in Syria and Lebanon, and has carried out dozens of air strikes against Iran-backed forces and attempts to smuggle advanced weapons to Hezbollah.

Long-simmering tensions between Israel and Iran in Syria stepped up considerably in recent months, beginning in February, when an Iranian drone carrying explosives was flown from the T-4 air base in central Syria into Israeli airspace, and was shot down by an IAF helicopter.

Earlier this month, the Israeli Air Force carried out its biggest operation in Syria in 40 years, when it attacked more than 50 Iranian targets, in response to an Iranian rocket barrage at the Golan Heights.

Agencies contributed to this report.