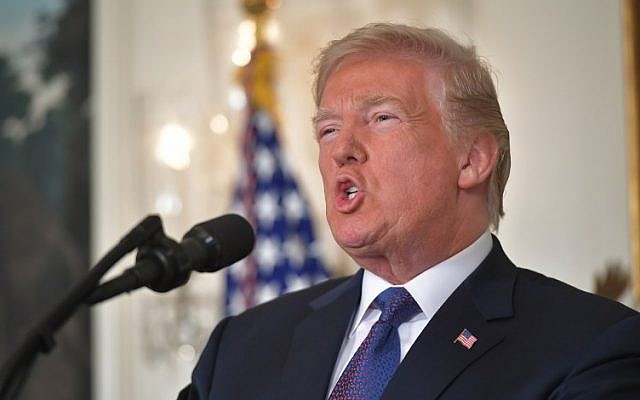 US President Donald Trump addresses the nation on the situation in Syria April 13, 2018 at the White House in Washington, DC (AFP PHOTO / Mandel NGAN)

(SOURCE)   US President Donald Trump announced late Friday that a joint US-British-French operation had been launched on Syria, targeting the “criminal” regime of Bashar Assad for his alleged use of chemical weapons against civilians and to deter him from doing it again.

Loud explosions lit up the skies over the Syrian capital as Trump announced the airstrikes.

“A short time ago, I ordered the United States armed forces to launch precision strikes on targets associated with the chemical weapons capabilities of Syrian dictator Bashar al-Assad,” Trump said in a primetime televised address to the nation.

“A combined operation with the armed forces of France and the United Kingdom is now under way. We thank them both. This massacre was a significant escalation in a pattern of chemical weapons use by that very terrible regime.”

General Joseph Dunford, Washington’s top general, said the precision strikes hit a scientific research center near Damascus, a storage facility and command post also near the capital and a chemical weapons storage facility near Homs. He said Syrian surface to air missile batteries had attempted to fire back, but there were no initial reports of any allied losses.

Trump said the US was prepared to “sustain” pressure on Assad until he ends what the president called a criminal pattern of killing his own people with internationally banned chemical weapons. It was not immediately clear whether Trump meant the allied military operation would extend beyond an initial nighttime round of missile strikes.

“The evil and the despicable attack left mothers and fathers, infants and children, thrashing in pain and gasping for air. These are not the actions of a man; they are crimes of a monster instead,” Trump said.

Later, Defense Secretary Jim Mattis said no additional strikes on Syria were planned. “Right now this is a one-time shot,” he said.

Trump said the three nations have “marshaled their righteous power” and asked for a “prayer for our noble warriors.”

The decision to strike, after days of deliberations, marked Trump’s second order to attack Syria; he authorized a barrage of Tomahawk cruise missiles to hit a single Syrian airfield in April 2017 in retaliation for Assad’s use of sarin gas against civilians.

Trump chastised Syria’s two main allies, Russia and Iran, for their roles in supporting “murderous dictators,” and noted that Russian President Vladimir Putin had guaranteed a 2013 international agreement for Assad to get rid of all of his chemical weapons. He called on Moscow to change course and join the West in seeking a more responsible regime in Damascus.

“To Iran and to Russia, I ask: What kind of a nation wants to be associated with the mass murder of innocent men, women and children?

“Russia must decide if it will continue down this dark path or if it will join with civilized nations as a force for stability and peace,” he argued.

He called the two countries those “most responsible for supporting, equipping and financing the criminal Assad regime.” He said “The nations of the world can be judged by the friends they keep.”

Syria’s capital was rocked by loud explosions that lit up the sky with heavy smoke. Associated Press reporters in Damascus saw smoke rising from east Damascus.

According to the Britain-based Syrian Observatory for Human Rights, “The Western coalition strikes targeted scientific research centers, several military bases, and the bases of the Republican Guard and Fourth Division in the capital Damascus and around it.”

The Syrian presidency tweeted that “Good souls will not be humiliated” after the airstrikes.

State media slammed the strikes as illegal. “The aggression is a flagrant violation of international law, a breach of the international community’s will, and it is doomed to fail,” said state news agency SANA.

The attack was expected to include barrages of cruise missiles launched from outside Syrian airspace. A Western official said strikes also included fighter jets.

At the Pentagon, Mattis said the strike was “harder” on the Syrian regime than the 2017 strike and targeted “Syrian chemical weapons infrastructure.” He described it as a “a one-time shot,” adding, “I believe it has sent a very strong message.”

Mattis said there were “no reports of losses” on the part of US and allied forces participating in the strike.

The strikes had been expected since harrowing footage surfaced of the aftermath of the alleged toxic gas attack in the Damascus suburb of Douma, which took place a week ago, and Trump reacted in an emotional tweet.

“Many dead, including women and children, in mindless CHEMICAL attack in Syria,” he declared. “President Putin, Russia and Iran are responsible for backing Animal Assad. Big price to pay.”

Assad’s government has denied responsibility for the chemical attack.

Trump’s anger and apparent determination was quickly matched by France’s President Emmanuel Macron, who signed his country up for a joint response. Britain’s Prime Minister Theresa May was more cautious, but by the time the first precision cruise missile was launched, Trump had a mini-coalition. 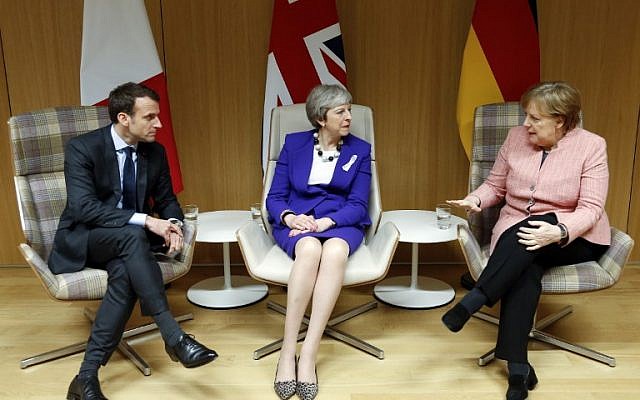 May said there was “no practicable alternative” to the use of force against Assad.

“This evening I have authorized British armed forces to conduct coordinated and targeted strikes to degrade the Syrian regime’s chemical weapons capability and deter their use,” she said in a statement.

May said “a significant body of information including intelligence” pointed to Syrian government responsibility for a suspected chemical attack last Saturday.

“This is not about intervening in a civil war. It is not about regime change,” she said. “It is about a limited and targeted strike that does not further escalate tensions in the region and that does everything possible to prevent civilian casualties.”

In his nationwide address, Trump stressed that he has no interest in a longtime fight with Syria.

“As other nations step up their contributions, we look forward to the day when we can bring our warriors home,” Trump said. “And great warriors they are.”

The US has about 2,000 troops on the ground in Syria as advisers to a makeshift group of anti-Islamic State fighters known as the Syrian Democratic Forces. They are in eastern Syria, far from Damascus. A US-led coalition has been conducting airstrikes in Syria since September 2014 as part of a largely successful effort to break the IS grip on both Syria and Iraq.

Jarrod Agen, Vice President Mike Pence’s deputy chief of staff, said Pence called congressional leaders from his hotel suite in Lima, Peru, to notify them of the president’s plan to address the nation about the Syrian air strikes.

Russia has been a staunch ally of Syrian President Bashar Assad’s government and has helped turn the tide of war in his favor since entering the conflict in September 2015. Syria’s civil war, which began as a popular uprising against Assad, is now in its eighth year.