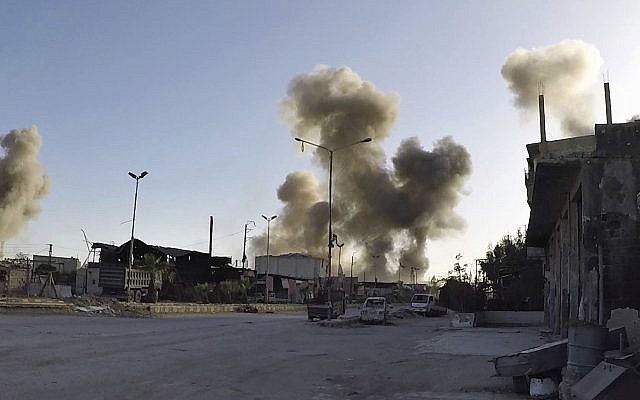 BEIRUT (AP) — Syrian government forces and their allies are on alert and taking precautionary measures at military bases and posts across the country amid fears of a US strike in the aftermath of a chemical weapons attack, Syrian war monitors said Tuesday.

The measures come as US President Donald Trump is threatening an imminent military strike against Syria, vowing to respond “forcefully” to Saturday’s apparent chemical weapons attack on civilians near Damascus and warning that Russia — or any other nation found to share responsibility — will “pay a price.”

The Britain-based Syrian Observatory for Human Rights said that as of Monday night, troops have been on a 72-hour alert and are fortifying their positions. The Observatory’s chief Rami Abdurrahman said the alert includes all army positions and bases from the southern province of Sweida all the way to Aleppo province in the north, the Mediterranean coast in the west to Deir el-Zour province in the east, along the Iraqi border.

The Sound and Picture Organization, an activist collective in eastern Syria, said that Iranian fighters and members of Lebanon’s Hezbollah group have evacuated their positions in the Boukamal area, near Iraq’s border.

A Lebanese politician with close links to the Syrian government confirmed that precautionary measures are being taken throughout Syria. The politician, who spoke on condition of anonymity because he was not authorized to speak about secret military movements, added that the atmosphere and American statements hint to a possible strike “but there are no indications on the ground so far.” 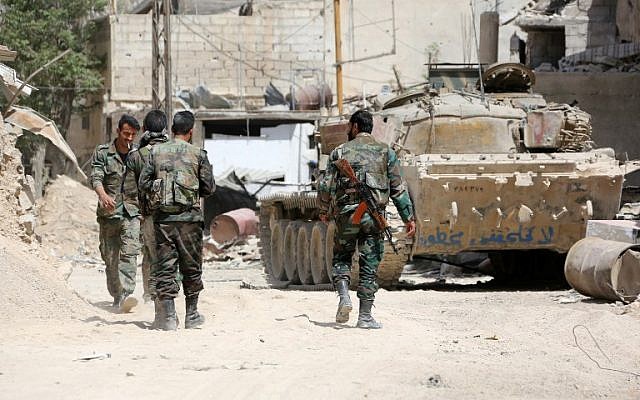 A picture taken on April 8, 2018, shows Syrian Army soldiers gathering in an area on the eastern outskirts of Douma, as they continue their offensive to retake the last opposition holdout in Eastern Ghouta. (AFP Photo/Stringer)

The politician said the Syrian government was expecting a limited strike, similar to the one on Shayrat air base last year, referring to last year’s US attack on the central air base of Shayrat in the central province of Homs following a chemical weapons attack on northern Syria that Washington blamed on the government.

In Moscow, a senior Russian lawmaker said his country is willing to help arrange a visit this week for experts from the international chemical weapons watchdog to the site of a suspected poison gas attack in Syria.

Yevgeny Serberennikov, from the defense committee at the Federation Council, told the RIA Novosti news agency on Tuesday that Russia is anxious for the Organization for the Prohibition of Chemical Weapons to “finally start carrying out the functions it was created for.”