UN warns situation in Eastern Ghouta ‘spiraling out of control,’ as 57 children are killed in bloodiest bombardments in four years

ARBIN, Syria (AFP) — Airstrikes hit Syria’s Eastern Ghouta for a third straight day on Tuesday, bringing the civilian death toll to nearly 200 as the UN warned the situation in the rebel enclave was spinning “out of control.”

Air strikes and rocket and artillery fire have battered the rebel-held enclave since Sunday in apparent preparation for a government ground assault on the besieged region.

At least 194 civilians have been killed, among them 57 children, the Syrian Observatory for Human Rights said.

On Monday alone, 127 civilians, including 39 children, were killed in the bombardment — the single bloodiest day for Eastern Ghouta in four years. 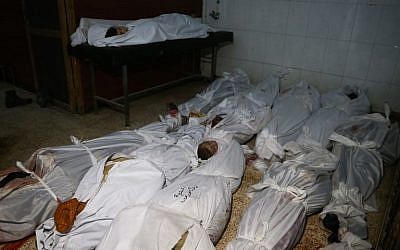 The bodies of civilians who were killed in Syrian army bombardment on the town of Hamouria in the rebel-held enclave of Eastern Ghouta are seen lying on the ground at a make-shift morgue the morning after the attacks on February 20, 2018. (AFP PHOTO / ABDULMONAM EASSA)

Held by rebels since 2012, Eastern Ghouta is the last opposition pocket around Damascus and President Bashar Assad is keen to retake it with an apparently imminent ground assault.

The UN’s regional humanitarian coordinator for Syria Panos Moumtzis has warned that the targeting of civilians in the enclave “must stop now.”

“The humanitarian situation of civilians in East Ghouta is spiraling out of control. It’s imperative to end this senseless human suffering now,” Moumtzis said on Monday.

The UN has repeatedly called for a month-long ceasefire across Syria’s front lines, from Eastern Ghouta to the Kurdish enclave of Afrin in the northwest, which Turkey threatened on Tuesday to lay siege to in the coming days.

“February 19 was the one of the worst days that we’ve ever had in the history of this crisis,” said an exhausted doctor in a hospital in Eastern Ghouta.

Identifying himself as Abu al-Yasar, he described treating a one-year-old brought into the Arbin hospital with blue skin and a faint pulse, rescued from under the rubble. 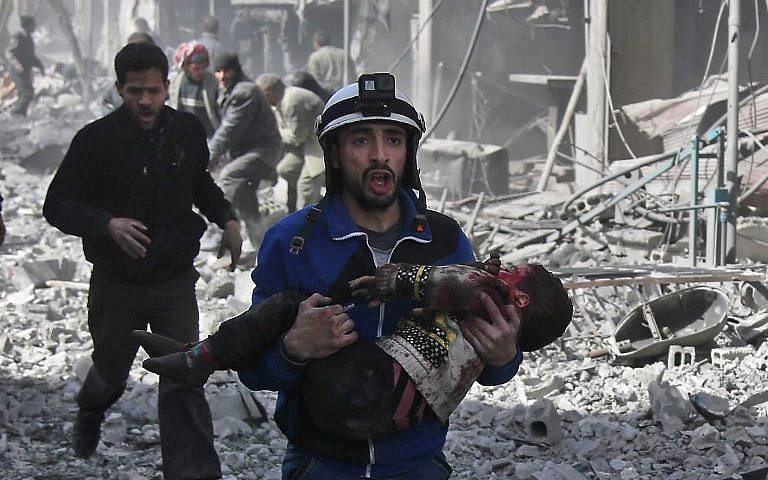 A Syrian civil defense member carries an injured child rescued from between the rubble of buildings after a government bombing in the rebel-held town of Hammuriyeh, in the besieged Eastern Ghouta region on the outskirts of the capital Damascus, on February 19, 2018. (AFP Photo/Abdulmonan Eassa)

“I opened his mouth to put in a breathing tube and I found it packed with dirt,” Abu al-Yaar told AFP.

He pulled out the dirt as fast as possible, put in the breathing tube and managed to save the baby’s life.

“This is just one story from among hundreds of wounded.”

The bloodshed prompted the UN children’s agency UNICEF to issue a largely blank statement on Tuesday to express its anger.

“We no longer have the words to describe children’s suffering and our outrage,” the agency said in a brief postscript beneath the empty space on the page.

“Do those inflicting the suffering still have words to justify their barbaric acts?”

More than 400,000 people live in Eastern Ghouta, which has been surrounded by government troops since 2013. Food, medicine, and other basic necessities are nearly impossible to obtain. 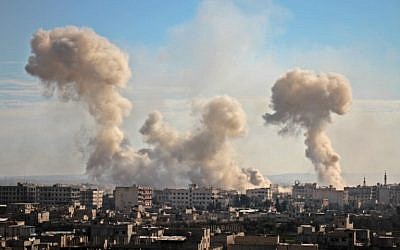 Smoke rises from buildings following bombardment on the village of Mesraba in the rebel-held besieged Eastern Ghouta region on the outskirts of the capital Damascus, on February 19, 2018. (AFP PHOTO / Hamza Al-Ajweh)

On Tuesday, at least four people were killed and 15 wounded by rebel fire on the capital, state television reported.

Al-Watan newspaper, which is close to the government, said on Tuesday that the bombing campaign “comes ahead of a vast operation on Ghouta, which may start on the ground at any moment.”

Both Al-Watan and the Observatory had earlier reported ongoing negotiations for the withdrawal of jihadists from the enclave.

But the escalating bombardment suggests the regime will likely opt for a ground assault.

It already waged a ferocious five-day air assault on Eastern Ghouta earlier this month that left around 250 civilians dead and hundreds wounded.

More than 340,000 people have been killed since the civil war erupted in 2011 when protests against Assad’s government were brutally crushed. 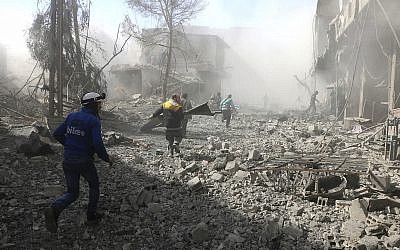 An array of rebels, some of them jihadist, have since carved out zones of control as have the Kurdish minority, and the government and its allies.

Turkey has been waging an air and ground offensive against the Kurdish-controlled enclave of Afrin just across the border for the past month.

President Recep Tayyip Erdogan on Tuesday defended the operation’s slow progress, saying it was to avoid putting the lives of both Turkish troops and civilians needlessly at risk.

He told parliament Turkish troops and their Syrian rebel allies would lay siege to the town of Afrin “in the coming days.”

Ankara says the Kurdish People’s Protection Units (YPG), which controls Afrin, is a “terrorist” offshoot of the Kurdistan Workers’ Party (PKK), which has waged an insurgency in southeastern Turkey since 1984.