(SOURCE)    Brandishing a fragment of an Iranian drone downed over northern Israel a week ago, Prime Minister Benjamin Netanyahu on Sunday warned that Israel could strike the Islamic Republic directly and cautioned Tehran not to “test Israel’s resolve.”

“Mr. Zarif, do you recognize this? You should, it’s yours. You can take back with you a message to the tyrants of Tehran — do not test Israel’s resolve!” proclaimed Netanyahu at the Munich Security Conference, which was also attended by Iranian Foreign Minister Mohammad Javad Zarif.

The Iranian drone, which entered northern Israel from Syria near the Jordan border last Saturday, was shot down by an Israeli attack helicopter. In response to the drone incursion, Israeli jets attacked the mobile command center from which it was operated, the army said last week.

During the reprisal raid, one of the eight Israeli F-16 fighter jets that took part in the operation was apparently hit by a Syrian anti-aircraft missile and crashed. The Israeli Air Force then conducted a second round of airstrikes, destroying between a third and half of Syria’s air defenses, according to IDF spokesperson Lt. Col. Jonathan Conricus.

The flareup on the northern border marked the first direct confrontation between the Israeli air force and the Iranian regime on Israeli territory. Israel has warned of growing Iranian entrenchment in neighboring Syria and has said it will not abide an Iranian military presence on its borders.

“Through its proxies — Shiite militias in Iraq, the Houthis in Yemen, Hezbollah in Lebanon, Hamas in Gaza — Iran is devouring huge swaths of the Middle East,” said Netanyahu.

“Israel will not allow Iran’s regime to put a noose of terror around our neck,” he added. “We will act without hesitation to defend ourselves. And we will act if necessary not just against Iran’s proxies that are attacking us, but against Iran itself.”

In his remarks on Sunday, the prime minister also railed against the nuclear deal between Tehran and world powers, lambasted the Iranian regime, and branded Zarif the “smooth-talking mouthpiece of Iran.”

“I’ll say this, he lies eloquently,” Netanyahu said. “Zarif said it was wrong to say Iran is radical. If that’s true, why do they hang gays from cranes in city squares?”

Displaying a map of the Middle East, Netanyahu noted that while the Islamic State terrorist group is in retreat, Iran has been steadily making gains. Israeli military intelligence has helped prevent dozens of terror attacks in dozens of countries by Islamic State, said Netanyahu.

Iran is trying to take over large swaths of the Middle East, including setting up naval bases in the Mediterranean, Netanyahu charged.

“Can you imagine Iranian submarines next to the US Sixth Fleet? Next to the port of Haifa?” he asked. 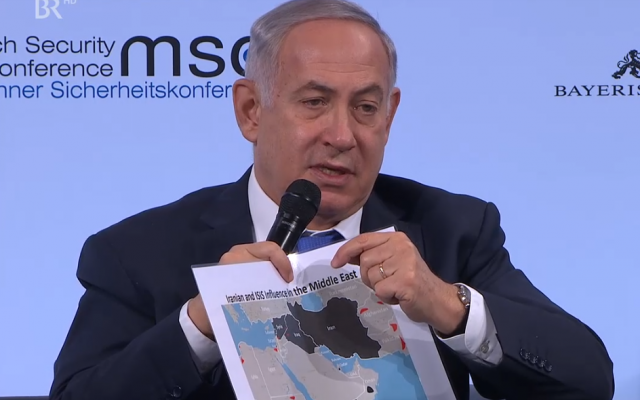 Prime Minister Benjamin Netanyahu shows a map of Iranian influence in the Middle East during a speech on the third day of the 54th Munich Security Conference (MSC) held at the Bayerischer Hof hotel, in Munich, southern Germany, on February 18, 2018. (Screen capture)

The prime minister called for scrapping the 2015 nuclear deal between world powers and Tehran, saying, “Let’s not repeat the mistakes of the past. Appeasement never works.”

He likened modern Iran to Nazi Germany on the eve of World War II, saying that agreements between both regimes and world powers had emboldened them.

“Concessions to Hitler only emboldened the Nazis. Well-intentioned leaders only made war more difficult and costly,” he said.

“Iran is not Nazi Germany. One championed a master race, the other champions a master faith,” said Netanyahu. “Iran looks to destroy Israel and is developing ballistic missiles that can also reach Europe and the US. Once nuclear-armed, Iran will be unchecked.”

“I don’t care about the agreement, fixing it or nixing it. I care about preventing Iran from getting a nuclear weapon,” Netanyahu said, calling for “the toughest, crippling sanctions” against Iran’s development of ballistic missiles.
The prime minister also hinted at a diplomatic row with Poland over a law outlawing blaming the Polish state or nation for crimes of the Holocaust, though he did not address it directly. 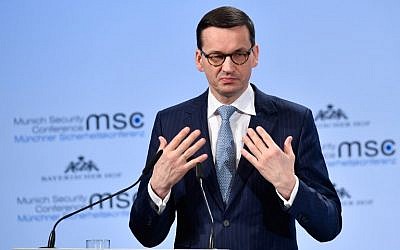 Addressing the Munich Security Conference on Saturday, Polish Prime Minister Mateusz Morawiecki was rejecting criticism of a new law that criminalizes mentions of Polish state complicity in the Holocaust, when he was asked by an Israeli journalist if sharing his family’s history of persecution in Poland would be outlawed under the new legislation.

Speaking about Nazi crimes in World War II, the prime minister said on Sunday that “60 million were killed, including a third of my own people. Six million Jews killed by the Nazis and their collaborators,” he said, emphasizing the last word.

Agencies contributed to this report.