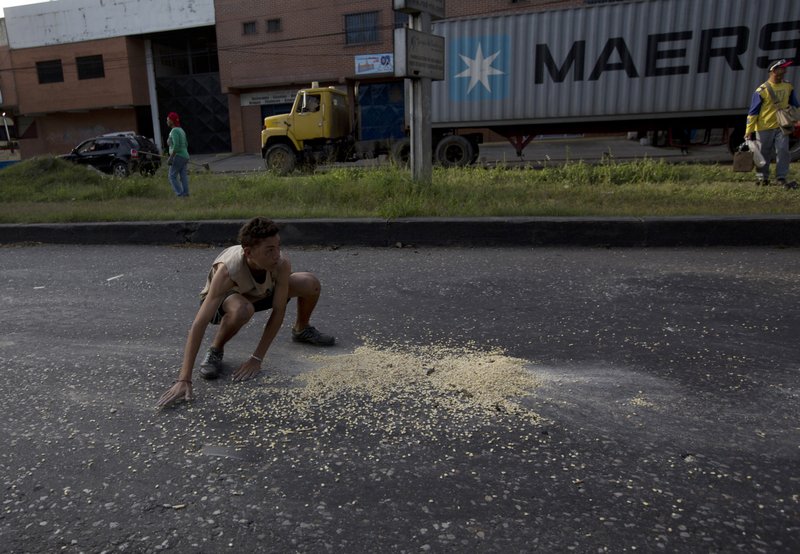 In this Jan. 23, 2018 photo, a youth moves quickly to collect grains of corn on the street that fell from a truck that was looted outside the port in Puerto Cabello, Venezuela. At the country’s biggest port, people swarmed a corn-carrying truck and began filling up sacks with the grain while the driver was held at gunpoint. (AP Photo/Fernando Llano)

PUERTO CABELLO, Venezuela (AP) — The cab of Carlos Del Pino’s big rig gave him a nerve-rattling front-row seat to a surge in mob attacks on Venezuela’s neighborhood markets, cattle ranches and food delivery trucks like his.

Shortly after pulling away from the docks at Puerto Cabello, the country’s biggest port, he witnessed 20 people swarm a truck ahead of him and in a frenzy fill up their sacks with the corn it was carrying to a food-processing plant. The driver was held at gunpoint.

“It fills you with terror,” Del Pino said.

He has hauled cargo for 14 years, and on a good month earns the equivalent of about $100, enough to support his wife and two daughters. Yet, despite his fears, he sympathizes with his impoverished countrymen, who are becoming desperate amid Venezuela’s widespread food shortages and sky-high inflation.

Sporadic looting, food riots and protests driven by the hungry poor have surged in Venezuela, a country that’s no stranger to unrest. But the uprisings playing out recently have a different face than the mostly middle-class protesters who took to the streets for months last year in political demonstrations trying to oust President Nicolas Maduro.

“These protests are coming from people of the lower classes who simply cannot get enough to eat,” said David Smilde, a senior fellow at the Washington Office on Latin America, who has spent decades researching Venezuela. “They want relief, not necessarily to force Maduro from power.”

Venezuela holds the world’s largest oil reserves and was once among Latin America’s wealthiest nations. But after nearly two decades of socialist rule and mismanagement of the state-run oil company, it is being battered by the worst economic crisis in its history.

The surge in violent food protests began in poor neighborhoods across the country around Christmas, when Maduro had promised that holiday hams were coming in government food baskets distributed to his supporters.

But many didn’t arrive, sparking protests with small groups burning garbage in the street and looting. Opposition pundits called it the “pork revolution.” Trying to bring calm, Maduro ordered hundreds of supermarkets to slash prices to the previous month’s level — a tall order in a country where prices have been doubling every few weeks.

Repeating a common refrain, the government blamed the absence of hams on sabotage by its foreign critics, in this case Portugal, which it said was taking orders from the U.S.

“Why didn’t the ham arrive? Because of the blockade against us,” socialist party leader Diosdado Cabello said on state TV, blaming the “gringos” but providing no evidence.

The unrest has cooled some, but many Venezuelans fear it will be a temporary lull as the economy spins further out of control. The International Monetary Fund estimates inflation will reach five digits this year, while the economy, in its fifth straight year of recession, will shrink 15 percent.

Barely solvent businesses say they are reluctant to import more goods, fearing another government-ordered fire sale. As the currency crashes on the flourishing black market, the monthly minimum wage is now worth the equivalent of just $3.

Financial sanctions imposed in August by the Trump administration are only adding to Venezuelans’ misery, choking off the country’s access to credit and scaring away oil companies.

Recently a dozen men stormed a street-side deli in the western city of Barquisimeto. Surveillance cameras captured them leaping over the glass counter as customers and employees scrambled out of the way. They wiped the store clean in minutes.

Cattle ranchers say at least two farms have been raided by people who slaughtered cows. A video on Twitter shows a dozen men in the state of Merida killing a cow with rocks and a machete, one shouting: “We are hungry.”

In the first half of January, there were at least 110 incidents of looting, more than five times than in the same period a year earlier, says the Venezuelan Observatory of Social Conflict, a non-governmental group that tracks unrest.

Food and the cash to pay for it are more difficult to find, especially outside the capital of Caracas. And even when people have money, prices are often beyond their reach, with the inflation rate soaring above 2,600 percent in 2017, the opposition- controlled National Assembly says.

Looting is part of a wider trend in hunger-related crimes, said Roberto Briceno Leon, director of the Caracas-based Venezuelan Observatory for Violence.

Street gangs are luring poor children as young as age 9 with food, he said. Standing in as a lookout during a burglary used to earn a recruit Nike shoes or Wrangler jeans. Now, they get a McDonald’s hamburger, he said.

Briceno Leon adds that some hungry people unable to buy groceries steal food by eating it inside stores. Men riding motorbikes increasingly yank bags of food away from customers who have stood in line for hours, spending what little money they had.

“It’s not just that you do not have money,” he said. “There’s little money to shop with and few products.”

Truckers hauling food — from rice to live chickens — have become targets while stopped in traffic or making a pit stop.

When the mob recently waylaid the truck in front of him, Del Pino rolled up his cab windows and locked the doors in fear the hungry mob would turn on him next.

He pulled his semi out of the line, dodging an attack.

2 thoughts on “Venezuelans ‘loot to eat’ amid economic tailspin”