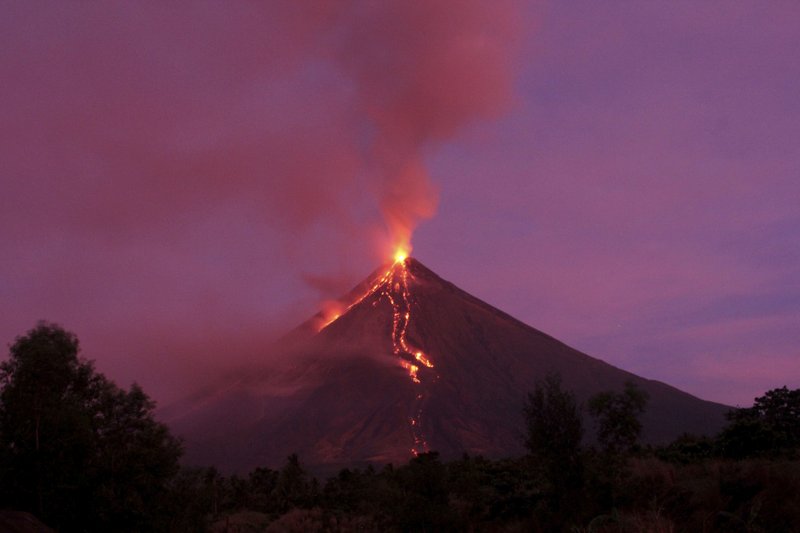 Molten lava flows down the slopes of Mayon volcano during its mild eruption as seen from Legazpi city, Albay province, southeast of Manila, Philippines Tuesday, Jan. 30, 2018. Mayon’s lava fountaining has flowed up to 3 kilometers (1.86 miles) from the crater in a dazzling but increasingly dangerous eruption. (AP Photo/Bogie Calupitan)

LEGAZPI, Philippines (AP) — A heavy shroud of ash from erupting Mount Mayon in the Philippines halted vehicles in at least two towns due to poor visibility as the volcano blew more lava and columns of ash from its crater, officials said Tuesday.

The Philippine Institute of Volcanology and Seismology said one large lava eruption lasted more than an hour and a half late Monday. Mayon belched an ash plume that reached 1.5 kilometers (one mile) above the crater and caused significant ash fall in the towns of Camalig and Guinobatan.

Authorities urged residents to seek treatment for skin irritation and other health issues and immediately clean their roofs and cars because of the corrosive effect of the volcanic ash, Office of Civil Defense regional director Claudio Yucot said.

Mayon in northeastern Albay province has been erupting for more than two weeks, forcing more than 84,000 villagers to flee to crowded emergency shelters.

It has been belching red-hot lava fountains, huge columns of ash and molten rocks into the sky and plunging communities into darkness with falling ash. It has remained at alert level four on a scale of five, indicating a more violent eruption could be imminent.

Scientists have warned that despite repeated eruptions of lava, Mayon is still swollen with magma below the surface and could erupt explosively.

No injuries have been reported in the current eruptions, but authorities have struggled to keep people out of a danger zone 8 kilometers (5 miles) from the crater. They are worried the eruption may last months, disrupting the lives and livelihoods of people in Mayon’s shadow.

Provincial leaders told President Rodrigo Duterte, who visited Albay on Monday, that disaster funds were running low and he immediately ordered the disbursement of more funds.

The government has raised the possibility of establishing a permanent “no man’s land” around Mayon, a sensitive and complicated proposal that would affect tens and thousands of people living in the fertile farmlands nearby. One possibility is expanding a national park around the base of the volcano, where trees could grow and become a buffer against volcanic flows endangering villages and towns.

Mayon has erupted about 50 times in the last 500 years, sometimes violently. In 2013, an ash eruption killed five climbers who had ventured near the summit despite warnings.

The Philippines has about 22 active volcanoes. The explosion of Mount Pinatubo in 1991 was one of the biggest volcanic eruptions of the 20th century, killing hundreds.