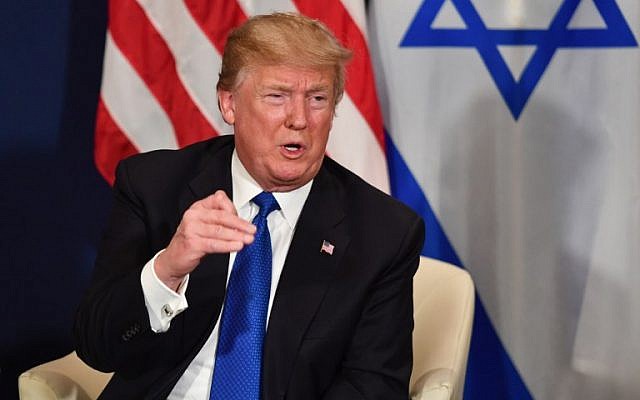 Sitting next to Netanyahu in Davos, US president says Israel ‘wants to make peace,’ Palestinians ‘disrespected’ US in refusing to meet Pence

DAVOS, Switzerland — In unscripted remarks to the press on Thursday, US President Donald Trump said the US would no longer transfer monetary aid to the Palestinians unless they entered peace negotiations with Israel, and excoriated the Palestinian leadership’s reaction to his decision last month to recognize Jerusalem as Israel’s capital.

Sitting alongside Prime Minister Benjamin Netanyahu before their bilateral meeting at the World Economic Forum in Davos, Switzerland, Trump called Palestinian Authority officials’ unwillingness to meet with members of his administration — including US Vice President Mike Pence during his visit to the region last week — “disrespectful.” 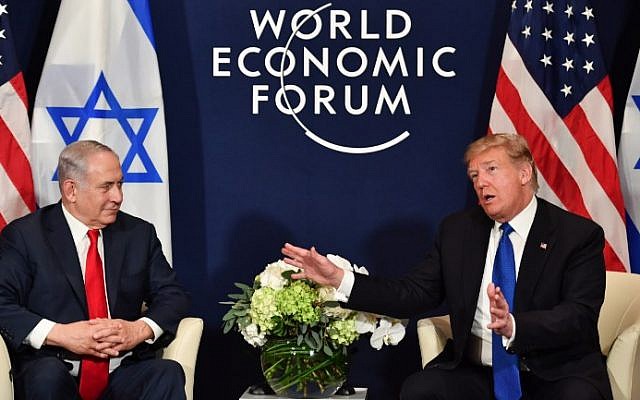 “If you look back at the various peace proposals, and they are endless, and I spoke to some of the people involved. And I said, ‘Did you ever talk about the vast amount of funds, money that we give to the Palestinians? You know, we give hundreds of millions of dollars.’ And they said, ‘We never talk about it,’” Trump said. “Well, we do talk about it. When they disrespected us a week ago by not allowing our great vice president to see them, and we give them hundreds of millions of dollars in aid and support, tremendous numbers, numbers that nobody understands, that money is on the table.”

Netanyahu, for his part, called Trump’s Jerusalem recognition a “historic decision.” Despite the crisis it has spurred with the Palestinians and much of the broader Arab world, he said it would advance the prospects for an agreement.

Meanwhile, the president suggested that his December 6 announcement recognizing Jerusalem as the capital of Israel and setting in motion plans to move the US embassy there had settled one of the key issues in the conflict. 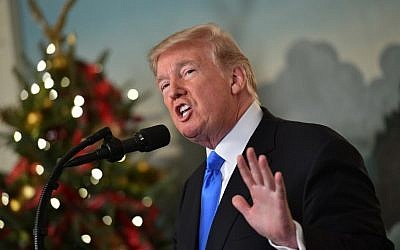 US President Donald Trump delivers a statement on Jerusalem from the Diplomatic Reception Room of the White House in Washington, DC, on December 6, 2017. (Saul Loeb/AFP)

He then turned to Netanyahu and said: “You won one point, and you’ll give up some other points later on in the negotiation — if it ever takes place. I don’t know that it ever will take place.”

Asked by The Times of Israel whether Jerusalem being “off the table” meant no part of the city would be part of a future Palestinian state, Trump responded, “Next question.”

That statement seemed to be at odds with his original speech making the announcement, in which he said the move was simply a “recognition of reality” and not an attempt to prejudge the way the Jerusalem issue is ultimately resolved between Israeli and Palestinian negotiators.

“We are not taking a position on any final status issues, including the specific boundaries of the Israeli sovereignty in Jerusalem, or the resolution of contested borders,” Trump said at the time. “Those questions are up to the parties involved.”

On Thursday, Trump added that the team he tasked with brokering the coveted Israeli-Palestinian peace accord — led by his son-in-law and senior adviser Jared Kushner — had already solidified its peace plan.

“We have a proposal for peace,” he said. “It’s a great proposal for the Palestinians. I think it’s a very good proposal for Israel,” notably differentiating how the two sides might perceive the plan.

“It covers a lot of the things we’ve over the years discussed and agreed on,” he added. 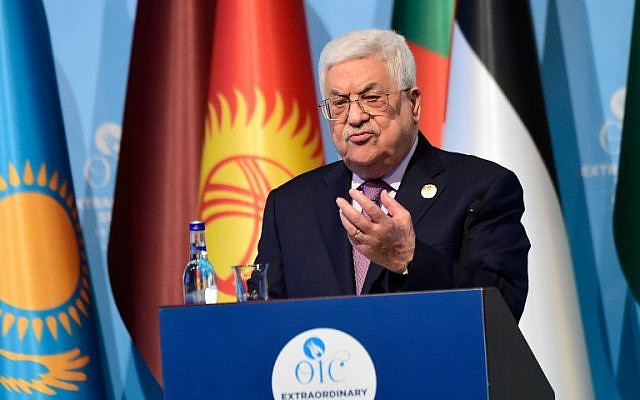 Palestinian Authority President Mahmoud Abbas speaks at a press conference following a summit of the Organization of Islamic Cooperation (OIC) about US President Donald Trump’s recognition of Jerusalem as Israel’s capital, on December 13, 2017, in Istanbul. (AFP Photo/Yasin Akgul)

He also repeated a point he’d made before — that Israel would have had to “pay” for the Jerusalem recognition, apparently with a major concession that would be enticing to the Palestinians and advance their aspirations.

“The fact is… there were never any deals that came close, because you could never get past Jerusalem. I helped them, because I’ve taken it off the table. That was the toughest issue,” he said.

Trump was asked if he had heard Abbas’s remarks criticizing him personally — Abbas declared on January 14 in Ramallah: “We told Trump we will not accept his project, the ‘deal of the century,’ which has become the ‘slap of the century. But we will slap back.’” And he added of Trump, “May God demolish your house.”

The president closed by expressing hope he could get the two sides to reconcile, ending over 100 years of conflict and violence. If that did happen, he said, the glory would rest on his own shoulders. “I think eventually very sound minds — I hope sound minds — are going to prevail. And it would be a very great achievement of mine.”