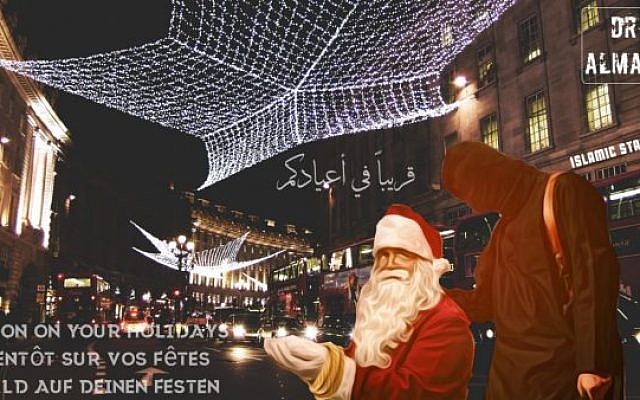 (SOURCE)   Amid unprecedented setbacks on the ground in Iraq and Syria, where Islamic State has been pushed out of all major population centers and relegated to marginal desert regions, the group appears to be urging its followers to show it is still a relevant force by carrying out terror attacks in major Western cities during the upcoming Christmas and New Year’s holidays.

An image circulated on an Islamic State-backing online chat group called “Army of Mujahideen” shows what appears to be an IS beheading photo, with a kneeling Santa Claus as its victim, according to New-York based newspaper The Epoch Times. The image is superimposed on an image of the Regent Street shopping area of London.

The words “Soon on your holidays” are written in English, French and German in the image’s lower left-hand corner. 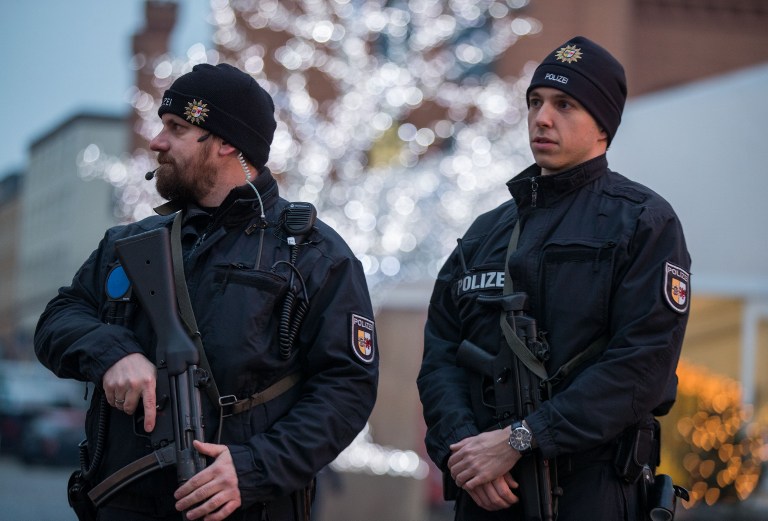 Islamic State does not have direct control over its affiliates and followers around the world. It coordinates attacks by issuing instructions urging supporters to act at certain times in the hope that some will be inspired to follow through on those instructions. The lack of clear hierarchy has made it difficult to prevent attacks in the past.

The photo’s publication follows several law enforcement interventions that are believed to have headed off major terror attacks planned for the holiday, as well as a US travel advisory issued November 16 that “alerts US citizens to the heightened risk of terrorist attacks throughout Europe, particularly during the holiday season.”

According to the advisory, “US citizens should exercise caution at holiday festivals and events. Recent, widely-reported incidents in France, Russia, Sweden, the United Kingdom, Spain, and Finland demonstrate that the Islamic State of Iraq and ash-Sham (ISIS or Da’esh), al-Qaeda, and their affiliates have the ability to plan and execute terrorist attacks in Europe. Last year, mass casualty attacks occurred at a Christmas market in Berlin, Germany in December and a nightclub in Istanbul, Turkey on New Year’s Eve…. US citizens should always be alert to the possibility that terrorist sympathizers or self-radicalized extremists may conduct attacks with little or no warning.”

On November 21, German police arrested six Syrian men in a massive operation in the cities of Essen, Hanover, Kassel and Leipzig that uncovered cellphones, laptops and documents. The New York Times, citing German media outlets, said the suspects were believed to have been plotting a terror attack on a Christmas market in the northwestern German city of Essen reminiscent of last December’s Christmas market deadly truck-ramming attack by Tunisian IS supporter Anis Amri in Berlin.

“The authorities have called for added vigilance around festivities this year, and cities across Germany are planning to install concrete barriers around markets and to increase police presence,” the Times said. 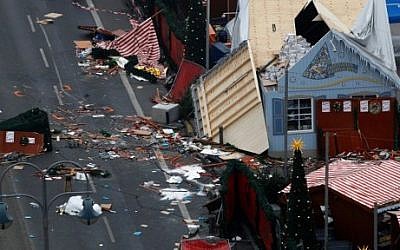 The aftermath of a terrorist attack is seen on December 20, 2016 after a lorry smashed into a busy Christmas market in central Berlin. (AFP Photo/Odd Andersen)

Meanwhile, Australian authorities said they foiled a planned New Year’s Eve mass-shooting with the arrest of a suspected IS sympathizer named Ali Ali, born in Australia to Somali parents, in a raid on a house in the Melbourne suburb of Werribee on Monday.

Ali planned to buy a gun and kill as many revelers as possible on New Year’s Eve in Melbourne, police alleged.

He appeared in court Tuesday charged with preparing to commit a terrorist attack and collecting documents to facilitate a terror attack. Police said the 20-year-old accessed a guidebook online produced by al-Qaeda on how to carry out terror acts and use firearms, but was arrested before he could purchase an automatic rifle. 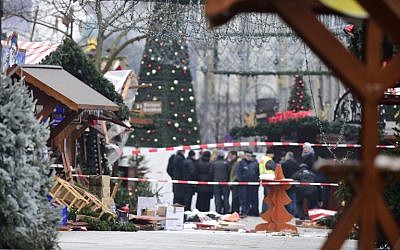 A view of the Christmas market near the Kaiser-Wilhelm-Gedaechtniskirche (Kaiser Wilhelm Memorial Church) in central Berlin on December 20, 2016, a day after a terror attack killed 12 and wounded dozens (AFP Photo/Tobias Schwarz)

“What we will be alleging is that he was intending to use a firearm to shoot and kill as many people as he could in the Federation Square area on New Year’s Eve,” said Victoria Police Deputy Commissioner Shane Patton.

“It is a tremendous concern to us that (during) the festive season, when people are out enjoying themselves, that there is a potential plot to commit a terrorist act. That is a huge issue for us but that is why we put the resources in,” he said.

Federation Square is in the heart of Melbourne, opposite a busy train station and St Paul’s Cathedral. It is one of the city’s most popular sites for New Year’s festivities and would be crowded on December 31.

The alleged plot comes a year after police prevented what they said was another attack in the same area on Christmas Day, arresting several men who planned to use explosives, knives and guns to target the location.

AFP contributed to this report.