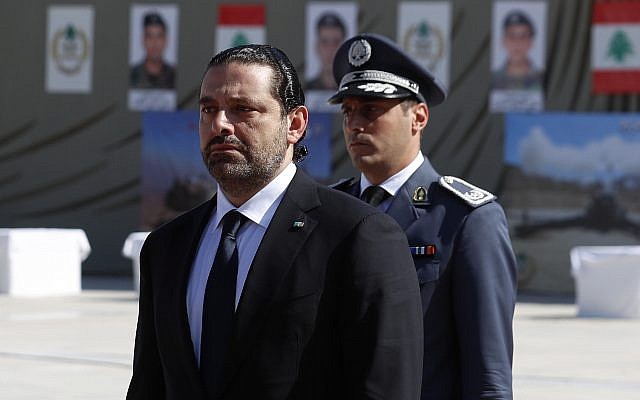 Lebanon’s split with Iran and Hezbollah has pundits worried about war, but commentators also bemoan attempts to get the right and left together at the Rabin rally

(SOURCE)    After days during which Israel’s northern and southern border areas competed for which could be more tense, the north won out over the weekend, but not in a way anyone expected. A political crisis in Lebanon, with the prime minister quitting and accusing Iran and Hezbollah of wreaking havoc on his country and the region, along with Golan Druze protesting over the situation of their brethren across the border, have the full attention of the Israeli press Sunday morning.

Not surprisingly, much oh the coverage of both events is pegged to how it will play out for Israel, and what it says about Iran’s grip on the region. But mostly the pundits just like handicapping what they mean for the prospects of war.

“For Israel, Hariri’s resignation merely increases the instability on the northern front and intensifies the danger of Hezbollah making rash moves if it becomes embroiled in a political crisis in Lebanon,” Amos Harel writes in a news analysis leading Haaretz’s front page.

But in the same paper, Zvi Bar’el says it’s a bit early to start heading for the bomb shelters.

“Hezbollah and Iran understand the threat posed by Hariri’s resignation quite well, and Iran’s response – that ‘the resignation was a plot by Saudi Arabia and the United States’ – reveals its fear of losing control of Lebanon, which until has now been run more or less to Tehran’s satisfaction. Still, it’s premature to envision disaster scenarios under which Hezbollah would exploit the resignation to attack Israel in order to demonstrate its continued control over the political arena,” he writes.

In Yedioth Ahronoth, Yossi Yehoshua says Hariri’s speech lashing out at Iran and Hezbollah could have been written by Israel, penning a column under the headline “He took the words right out of our mouth.” But as much as sabers may have been rattled, he also does not see war on the horizon, connecting the Lebanese political kerfuffle to the Druze protests on the northern frontier.

“In the interwoven web of interests, none of the actors in the region have any interest right now in war, though that does not mean war will not break out. Hezbollah needs quiet to deal with rehabilitating its forces returning to Lebanon from Syria, and it will be busy dealing with the internal political fallout in Lebanon,” he writes. “The Iranians don’t want to activate Hezbollah at this time, but rather to hold them in reserve for their original purpose, for emergency use against Israel in the event of an attack on their nuclear sites. Israel as well has no interest in starting a war, but the developments on the ground demand legitimate military operations, including those which may lead to war. So they need to manage these operations with the necessary caution and be ready for war, even if it’s not in the plans.”

It’s particularly in the case of the Druze village of Hader, under attack by jihadists, where Israel finds itself with no good move, given the large protests taking place by Druze on its side of the border and Israel’s commitment to protect them, writes Dror Eydar in Israel Hayom. 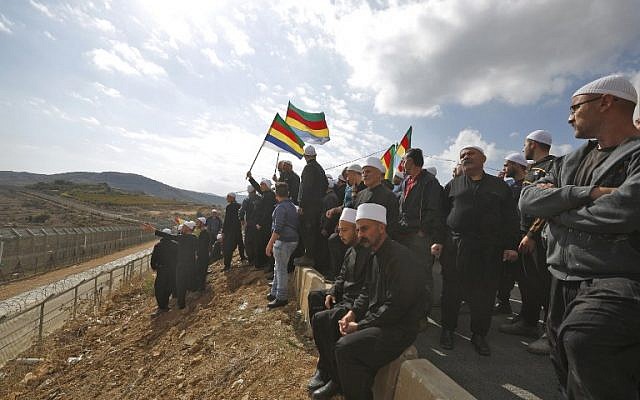 Druze men in the Israeli Golan Heights congregate near the Syrian border, waving their community’s flag, after they heard about a suicide bombing in the Syrian Druze village of Hadar, on November 3, 2017. (Jalaa Marey/AFP)

“Israel’s alliance with the Druze is clear and unequivocal, but Hader is a hostile village, sworn to President [Bashar] Assad, and has already sent some of its own to act on behalf of Hezbollah to carry out attacks against Israel. So Israel’s support for Hader is not just support for the Druze, but is also aid to Assad in Syria’s internal fighting. Keeping help from Hader isn’t just an affront to the life of Israel’s Druze, some of whom have relatives in the village, but also helps the rebels, in this case al-Qaeda’s affiliate in the Golan; nobody in Israel has any illusions about what will happen if Hader is captured and the group will be a meter from Majdal-Shams,” he writes. “Anyone who wants to drag Israel into the Syria’s civil war — or even ‘just’ test its alliance with the Druze in Israel — needs only to attack Hader. This is bad news for Israel’s Syria strategy, since it takes control over what happens out of Israel’s hands and puts it into the hands of irresponsible parties in the Golan Heights.”