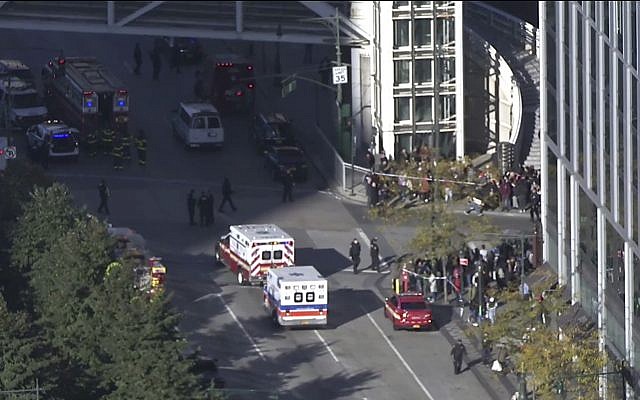 In this still image taken from video, police and ambulances respond to report of gunfire a few blocks from the World Trade Center in New York on Tuesday, Oct. 31, 2017. (AP Photo)

(SOURCE)   Eight people were killed and more than 12 were injured, the mayor of New York said, when a truck rammed cyclists and hit a school bus Tuesday near the World Trade Center memorial, in what law enforcement officials are treating as a terror attack.

Police and witnesses said a motorist drove down a busy bicycle path for several blocks, striking cyclists and pedestrians, then emerged from the vehicle shouting “Allahu akbar” and waving what appeared to be two guns.

They firearms were later found to have been a paintball gun and pellet gun, NYPD Commissioner James P. O’Neill said, refuting earlier reports that the attacker had opened fire.

Officers pursued the driver and shot him in the stomach, police said; he was then arrested and taken to a nearby hospital for treatment. ABC News identified the attacker as Sayfullo Saipov, 29, from Tampa, Florida. 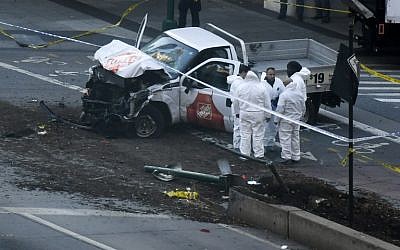 Investigators inspect a truck used by an apparent terrorist to mow down cyclists in New York on October 31, 2017 (AFP Photo/Don Emmert)

The FBI’s Joint Terrorism Task Forces was leading the investigation into the incident, CNN reported. If confirmed as such, it would be the first deadly terror attack in New York since September 11, 2001.

“At this no point there is no evidence to suggest a wider plot or wider scheme,” he said. “The truth is New York is an international symbol of freedom and democracy. That also makes us a target for those people who oppose those concepts.”

Footage posted to social media in the immediate aftermath of the attack showed at least three people lying motionless on the bike path.

A large number of police vehicles could be seen near West Street and Chambers Street, which is near a community college, a high school and a few blocks north of the National September 11 Memorial.

Tom Gay, a school photographer, was on Warren Street and heard people saying there was an accident. He went down to West Street and a woman came around the corner shouting, “He has a gun! He has a gun!” 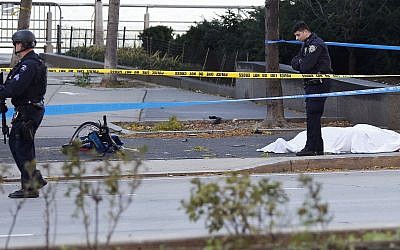 A New York Police Department officer stands next to a body covered under a white sheet near a mangled bike along a bike path Tuesday Oct. 31, 2017, in New York. (AP Photo/Bebeto Matthews)

Gay said he stuck his head around the corner and saw a slender man in a blue track suit running southbound on West Street holding a gun. He said there was a heavyset man pursuing him.

He said he heard five or six shots and the man in the tracksuit fell to the ground, gun still raised in the air. He said a man came over and kicked the gun out of his hand.

Uber driver Chen Yi said he saw a truck plow into people on a popular bike path adjacent to the West Side Highway. He said he then heard seven to eight shots and then police pointing a gun at a man kneeling on the pavement.

“I saw a lot of blood over there. A lot of people on the ground,” Yi said. 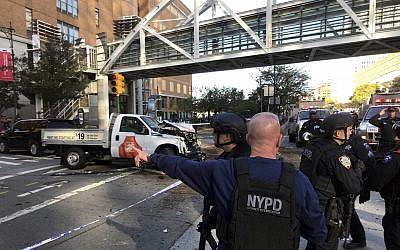 In this photo provided by the New York City Police Department, officers respond to a report of gunfire along West Street near the pedestrian bridge at Stuyvesant High School in lower Manhattan in New York, Tuesday, Oct. 31, 2017. (Martin Speechley/NYPD via AP)

His passenger, Dmitry Metlitsky, said he also saw police standing near a man who was on his knees with his hands up, and another man bleeding on the ground nearby. He said the Home Depot rental truck had also collided with a small school bus and one other vehicle.

Police were expected to give a news briefing shortly.

US President Donald Trump, a native New Yorker, condemned the attack and said the perpeator appeared to be “sick and deranged.”

“In NYC, looks like another attack by a very sick and deranged person. Law enforcement is following this closely. NOT IN THE U.S.A.!,” he tweeted.

White House spokeswoman Sarah Huckabee Sanders said Trump had been briefed by White House chief of staff John Kelly and “will be continually updated as more details are known.”

Sanders said, “Our thoughts and prayers are with all those affected.”