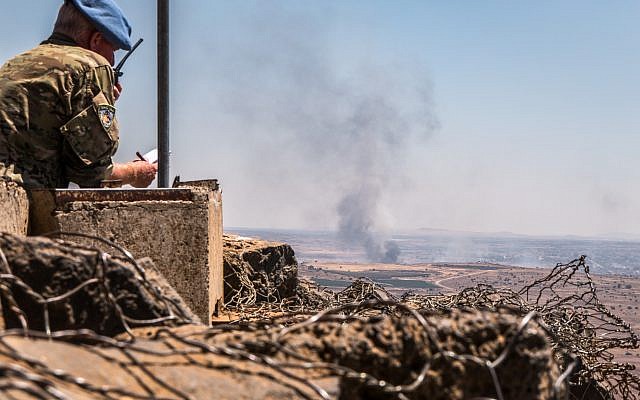 Illustrative photo of a UN observer at a lookout point as smoke rising at a Syrian village near the Israeli-Syrian border in the Golan Heights during fights between the rebels and the Syrian army, June 25, 2017. (Basel Awidat/Flash90)

(SOURCE)    The Israeli army on Saturday launched a military strike on three Syrian artillery targets across the border in the northern Golan Heights, hours after a pair of projectiles landed in an open field in Israeli territory as a result of spillover fire from the fighting in Syria.

“Even if this is just spillover, this is an exceptional incident and the continuance of such events will be met with a more fierce Israeli response,” a statement by the Israel Defense Forces said of the projectile fire into the Jewish state.

“The IDF will not tolerate any attempt to harm the sovereignty of the State of Israel and the security of its residents, and considers the Syrian regime responsible for what is happening in its territory,” the statement concluded.

As a result of the projectile fire, missile warning sirens were heard in a number of local communities Saturday morning.

The army said soldiers were searching the area for debris.

There were no reports of injuries or property damage.

After the IDF strike, the Syrian army said in a statement that the attack was proof of Israel’s “cooperation with terrorist organizations in the region,” and warned the Jewish state that it would retaliate to any “aggressive actions,” the Walla news site reported.

On Thursday, a projectile struck an open field on the Golan Heights in an apparent case of spillover fire from the fighting in Syria, the Israel Defense Forces said.

In response to the shelling, Israeli tanks stationed near the border fired back at the Syrian military position in Quneitra on Thursday evening. The IDF said the mortar position it attacked was the same one that fired the shell earlier in the day.

No siren was sounded as the warning system detected the projectile would land in an uninhabited area.

There has been an apparent uptick in the fighting on the Syrian side of the border between rebel militias and Syrian President Bashar Assad’s army.

Thursday’s flareup came after Israeli jets bombed an anti-aircraft battery near Damascus earlier in the week which had fired on an Israeli plane.

On Wednesday afternoon, rocket sirens rang out in IDF bases in the Golan Heights, set off by internal fighting across the border.

Speaking shortly after the sirens, Defense Minister Avigdor Liberman said Israel had “all the tools needed to deal” with the challenge of Iran in Syria, one of the strongest backers of Assad’s regime.

“The Iranians are trying to take control of Syria to become the dominant power there,” he said.

Also Wednesday, Iran’s military chief of staff warned that Tehran would not tolerate violations of Syrian sovereignty by Israel and vowed that the two countries would jointly fight against Syria’s enemies.