An Iranian military truck displays a banner reading “Death to Israel” as it carries munitions during a parade marking the country’s National Army Day, in Tehran, April 18, 2017. (AFP/Atta Kenare)

(SOURCE)   Iran’s powerful Revolutionary Guards on Thursday threatened a “relentless fight” against Israel, a day after the US urged the international community to confront Tehran over its “destructive conduct” across the Middle East.

“We will continue the relentless fight against the hegemonic system and Zionism more resolutely and powerfully than before and… will not hesitate a moment in defending the Islamic Revolution and the country’s national interests,” the IRGC said in a statement published by the semi-official Fars news agency.

The armed forces made similar comments earlier on Thursday, in a statement that also blamed the “Zionist regime” along with the White House for implementing “devastating” policies in the region.On Wednesday, US Ambassador Nikki Haley urged the UN Security Council to adopt the US’s tough approach to Iran and address all aspects of its “destructive conduct” — not just the 2015 nuclear deal. The Trump administration has threatened to label the IRGC, a branch of the armed forces acting at the behest of the country’s supreme leader, as a terrorist group.

Haley told the council that Iran “has repeatedly thumbed its nose” at council resolutions aimed at addressing Iranian support for terrorism and regional conflicts and has illegally supplied weapons to Yemen and Hezbollah militants in Syria and Lebanon. US Ambassador to the United Nations Nikki Haley, left, and former U.S. Secretary of State Condoleezza Rice participate in a panel discussion at a forum sponsored by the George W. Bush Institute in New York, Thursday, October 19, 2017. (AP/Seth Wenig)

The Revolutionary Guards also vowed to continue and accelerate its missile development program, despite threats from US President Donald Trump to impose sanctions on the regime if it does so.

“The regional influence and might and development of the Islamic Republic’s missile power which was established when the country was fully under sanctions will continue and advance without a stop and more rapidly,” the statement said.

Earlier this month, the commander of the IRGC threatened that if the United States designates it as a terrorist group, it will consider the US Army as equivalent to the Islamic State terror group. 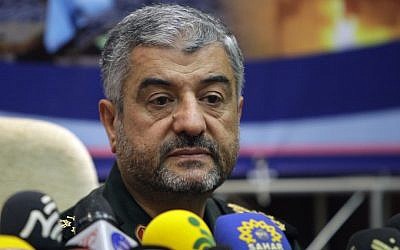 Gen. Mohammad Ali Jafari also said that if new sanctions against Iran go into effect, the US will have to “find a new place for its military bases, 2,000 kilometers (1,242 miles) away, outside the range of Iranian missiles, according to Iran’s official IRNA news agency.

“If reports on the US decision to enlist Iran’s IRGC as a terrorist group happen to be true, the Iranian force would also treat the American Army everywhere in the world and especially in the Middle East in the same way as Daesh (IS) terrorists,” he said.

Jafari was responding to plans by the US administration to target Iran’s affiliates, with a focus on the Revolutionary Guard.

Trump’s refusal last week to re-certify the nuclear deal has sparked a new war of words between Iran and the United States, fueling growing mistrust and a sense of nationalism among Iranians. Britain, China, France, Germany, Russia and the European Union — the other parties to the nuclear accord — all have been urging Trump’s administration not to abandon the accord.

Trump has yet to announce a withdrawal from the pact, instead kicking it to Congress for a decision.