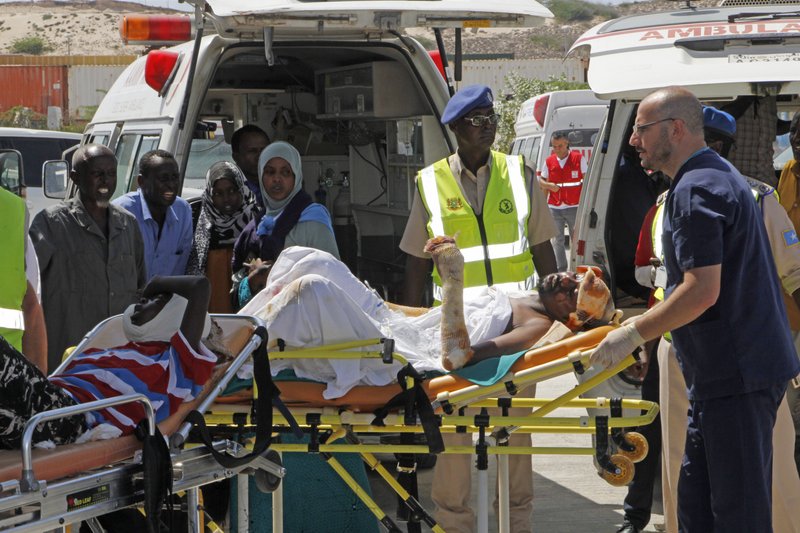 Turkish doctors transport a critically wounded man on a stretcher to a waiting Turkish air ambulance to airlift injured patients for treatment in Turkey, in Mogadishu, Somalia, Monday, Oct,16, 2017. The death toll from Saturday’s truck bombing in Somalia’s capital now exceeds 300, the director of an ambulance service said Monday, as the country reeled from the deadliest single attack. (AP Photo/Farah Abdi Warsameh)

MOGADISHU, Somalia (AP) — The death toll from a truck bombing in Somalia’s capital has risen above 300, the director of an ambulance service said Monday, as the fragile Horn of Africa nation reeled from the deadliest single attack it’s ever experienced.

More people died of their wounds in the past few hours, said Dr. Abdulkadir Adam of Aamin Ambulance service. Funerals have begun, and the government said the death toll is expected to rise in what has become one of the world’s worst attacks in years.

Saturday’s truck bombing targeted a crowded street in Mogadishu, and about 300 others were injured, many with horrific burns. Somalia’s government is blaming the al-Qaida-linked al-Shabab, Africa’s deadliest Islamic extremist group, which has not commented.

More than 70 critically injured people were airlifted to Turkey for treatment on Monday as international aid began to arrive, officials said. Nervous relatives stood on the tarmac at the airport, praying for the recovery of their loved ones.

Overwhelmed hospitals in Mogadishu have struggled to assist other badly wounded victims, many burned beyond recognition. Exhausted doctors struggled to keep their eyes open as the screams from victims or newly bereaved families echoed in the halls.

The most powerful bomb blast ever witnessed in Somalia’s capital has killed more than 200 people, with hundreds more injured. It is the deadliest single attack in the Horn of Africa nation. (Oct. 15)

The attack is one of the deadliest attacks in sub-Saharan Africa, larger than the Garissa University attack in Kenya in 2015, in which 148 died, and the U.S. Embassy bombings in Kenya and Tanzania in 1998, in which about 219 were killed.

In addition to Turkey, Kenya and Ethiopia have offered to send medical aid in response to what Somali’s government has called a “national disaster,” said Information Minister Abdirahman Osman.

Al-Shabab, which for more than a decade has waged war in Somalia, often targets high-profile areas of Mogadishu. Earlier this year, it vowed to step up attacks after both the Trump administration and Somalia’s recently elected president announced new military efforts against the group.

The country’s Somali-American leader, President Mohamed Abdullahi Mohamed, has declared three days of mourning and joined thousands of people who responded to a desperate plea by hospitals to donate blood.

Mogadishu, a city long accustomed to deadly bombings by al-Shabab, was stunned by the force of Saturday’s blast. The explosion shattered hopes of recovery in an impoverished country left fragile by decades of conflict, and it again raised doubts over the government’s ability to secure the seaside city of more than 2 million people.

The United States has condemned the bombing, saying “such cowardly attacks reinvigorate the commitment of the United States to assist our Somali and African Union partners to combat the scourge of terrorism.” It tweeted a photo of its charge d’affaires in Somalia donating blood. But the U.S. Africa Command said U.S. forces had not been asked to provide aid.

The U.S. military has stepped up drone strikes and other efforts this year against al-Shabab, which is also fighting the Somali military and over 20,000 African Union forces in the country.