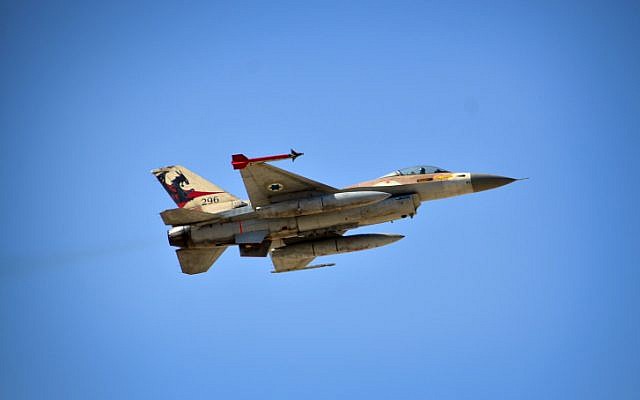 Illustrative: An IAF F-16 from the Red Dragon squadron during a drill, November 2013. (IDF Spokesperson’s Unit/Flash90)

(SOURCE)    Israeli Air Force jets attacked an anti-aircraft battery well inside Syria on Monday morning, after the surface-to-air system launched a missile at a different plane over the skies of Lebanon, the army said.

A military spokesperson said that “a number” of Israeli planes were flying over Lebanon as part of a “routine reconnaissance mission” on early Monday morning, when they came under attack by the Syrian anti-aircraft battery.

The targeted Israeli reconnaissance aircraft were not hit by the Syrian interceptor missile and returned to base safely, according to IDF spokesperson Lt. Col. Jonathan Conricus.

He would not elaborate on the number or type of aircraft, nor on where exactly they were flying over Lebanon, the home country of the Iran-backed Hezbollah terrorist group.

A few hours later, the IAF sent out a separate sortie to attack the anti-aircraft battery — an SA-5 model — which was located some 50 kilometers east of Damascus, Conricus said.

The Russian military, which is allied with Syria and operates in the war-torn country, was notified “in real-time” ahead of the Israeli airstrike on the SA-5 battery, the spokesperson said.

Conricus said that while the army will continue to defend itself, it was not looking to “destablize” the situation with Syria.

“Preserving the relative stability is a common interest,” the lieutenant colonel said. 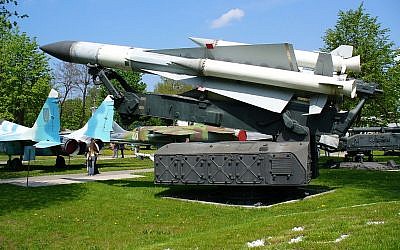 The Israeli jets launched four bombs at the Syrian anti-aircraft system. According to an initial IDF assessment, the strike destroyed the SA-5 battery, or at least “incapacitated” it, Conricus said. 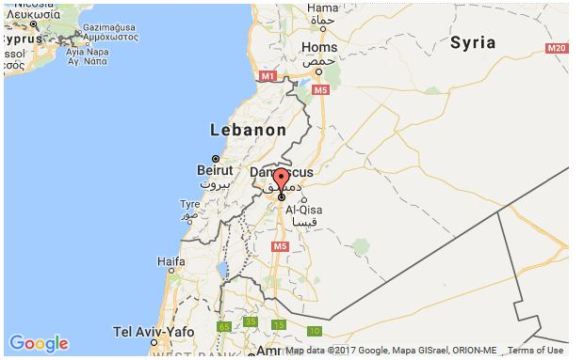 The IDF believes the Syrian battery that was struck was the same one that fired at the reconnaissance planes.

The SA-5, also known as the S-200, is a Russian-designed anti-aircraft system that has been in use since the late 1960s.

There was no immediate confirmation of the Israeli strike in Syrian state media.

According to the official government Sana news outlet, Monday was “Air Force and Air Defense Day” for Syria.

The incident came hours before Russian Defense Minister Sergei Shoigu was due to meet with his Israeli counterpart Avigdor Liberman in Tel Aviv.

When Shoigu arrives in Tel Aviv “he will get a full briefing on the matter,” Conricus said.

The spokesperson acknowledged the sensitivity of the timing of the incident and the potential for it to cause tension during Shoigu’s visit, but said the military was “confident it won’t influence anything else.”

“This was obviously not a preplanned event,” he added.

In order to avoid unwanted clashes with the Russian troops in Syria, Jerusalem and Moscow have developed a communication system.

Israeli officials do not typically discuss the full extent of the coordination between the two militaries, but stress that the IDF does not seek Russian permission before carrying out airstrikes in Syria.

In general, Israel’s operation in Syria consist of bombing sites that are used to develop, store and transport advanced weaponry to the Iran-backed Hezbollah terrorist group, making Monday’s strike something of an anomaly.

In March, Assad’s military fired multiple interceptor missiles from an SA-5 system at Israeli jets flying over Jordan on their way back from a bombing run in Syria. The IAF jets were unharmed, but one Syrian missile seemed to be on a trajectory that took it toward an Israeli community and so it was shot down by the Arrow 2 air defense system, in the first reported use of the system.

However, in that case, Israel did not respond to the anti-aircraft attack on the IAF jets with a retaliatory airstrike on the SA-5 battery that launched it.