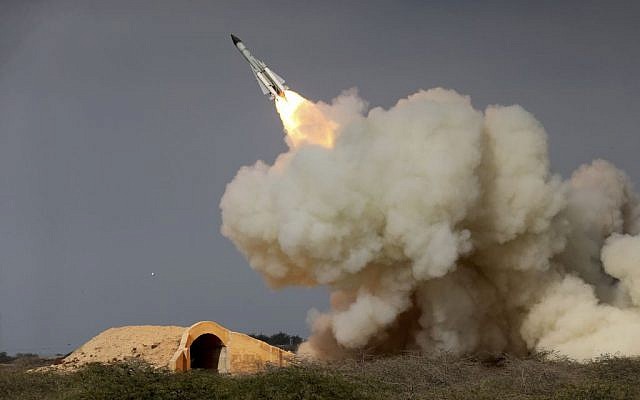 In this Dec. 29, 2016 file photo, released by the semi-official Iranian Students News Agency (ISNA), a long-range S-200 missile is fired in a military drill in the port city of Bushehr, on the northern coast of Persian Gulf, Iran. (Amir Kholousi, ISNA via AP, File)

(SOURCE)   Iran made dozens of attempts to illicitly obtain missile and nuclear technology,  even after it was bound by the nuclear deal with world powers, according to recent intelligence assessments by German regional states, Fox News reported Tuesday.

Intelligence reports from September and October from three of the 16 constituent states that make up Germany found that Iran tried 32 times to obtain related technologies.

The German state of North Rhine-Westphalia found that Iran made “32 procurement attempts… that definitely or with high likelihood were undertaken for the benefit of proliferation programs.”

Iran engages in “spreading atomic, biological or chemical weapons of mass destruction,” the report said, and noted that Iran used front companies in the United Arab Emirates, Turkey and China to get around international restrictions on its nuclear and missile research.

US President Donald Trump is scheduled Thursday to make an announcement on whether the US believes Iran is in compliance with the landmark nuclear deal that aimed to stop Iran from achieving nuclear weapons capability.

The Iran deal, known as Joint Comprehensive Plan of Action, or JCPOA, was signed with six global powers in 2015 and came into effect in January 2016. Iran also faces restrictions limiting its ballistic missile program, though it has continued carrying out tests.

In an earlier report on 2015, the German intelligence agency found that Iran made 141 attempts to procure similar technologies.

Another report from the German state of Hessen said that Iran, Pakistan, North Korea and Sudan use “guest academics” for activities connected with nuclear and weapons programs.

“An example for this type of activity occurred in the sector of electronic technology in connection with the implementation of the enrichment of uranium,” the report said.

The third report from state of Saxony-Anhalt, said Iran is continuing “unabated” in its missile program and could threaten Europe and beyond.

In a response to Fox News about the findings, German officials said they were nonetheless satisfied that Iran is complying with the JCPOA.

“We have no indication of Iran violating its JCPOA commitments,” said the officials, who were not identified by Fox News. “Quite on the contrary, the recent 2016 Report of the Federal Office for the Protection of the Constitution states that there is no evidence of Iran violating the JCPOA.”

“Having said that, we remain worried by Iran’s missile program. The aforementioned report, as well as reports from regional intelligence authorities, shows that Germany is highly vigilant in this regard and will continue to do so. However, this issue is outside the scope of the JCPOA and needs to be dealt with separately.”

Over the past few weeks, Trump has indicated that he would not be recertifying the Iran deal — a process required by a provision in a 2015 US law according to which he informs Congress every three months if the Islamic Republic is adhering to the terms of the agreement in exchange for broad international relief from oil, trade and financial sanctions.

The deadline for recertification is October 15.