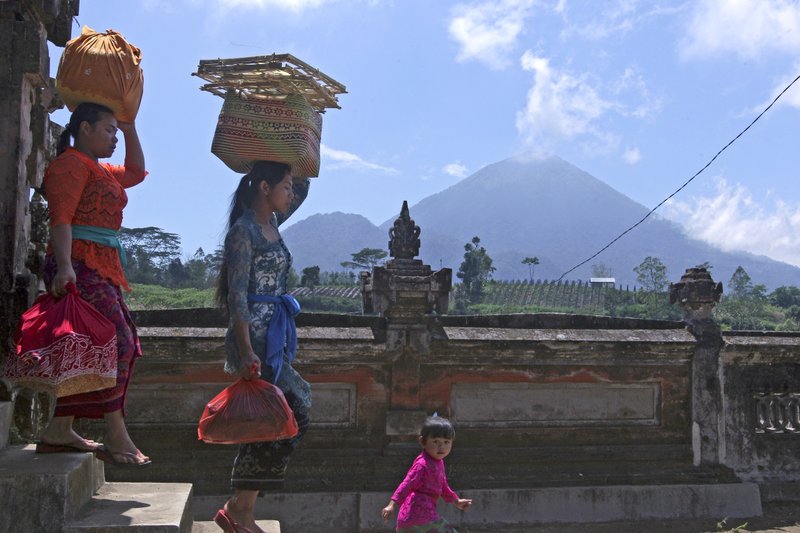 Women carry offerings at a temple about 10 kilometers (6.3 miles) from Mount Agung volcano, rear, at Pemuteran village in Karangasem, Bali, Indonesia, Wednesday, Sept. 27, 2017. Warnings that a volcano on the Indonesian tourist island of Bali will erupt have sparked an exodus of more than 75,000 people that is likely to continue to swell, the country’s disaster agency said. (AP Photo/Firdia Lisnawati)

BALI, Indonesia (AP) — Warnings that the Mount Agung volcano on the Indonesian tourist island of Bali will erupt have sparked an exodus of at least 75,000 people that is likely to continue to swell.

In this series of images by Associated Press photographer Firdia Lisnawati, villagers living within a high-danger zone that in places extends 12 kilometers (7.5 miles) from the crater have been evacuated, and others farther away are also leaving. Indonesian President Joko “Jokowi” Widodo visited a sports center serving as temporary accommodation in a district south of the volcano on Tuesday.

The region is being rattled daily by hundreds of tremors from the mountain, which volcanologists say indicates a high chance of an eruption. Mount Agung last erupted in 1963, killing about 1,100 people.