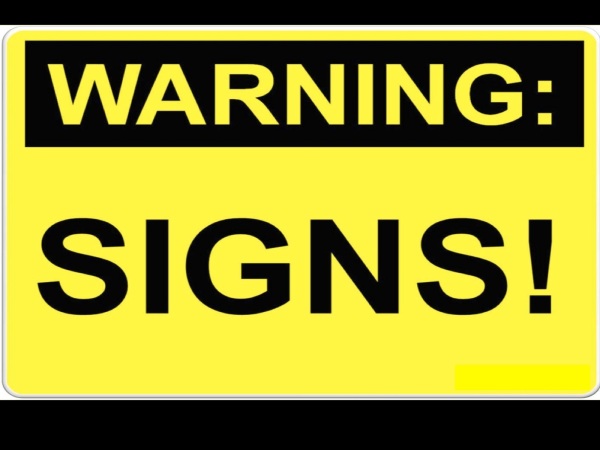 The bible also gives us signs to watch for, signs for the soon return of Christ for His bride, and signs of His second coming!

As we travel down the highway in our car we see so many signs that we cannot take them all in.  We see billboards with advertisements selling both goods and services, we see signs cautioning us of what lies ahead, signs telling us of just how fast we should drive, signs of where we are and where we are headed to.  We also see signs of historical sites, of places to eat and of places to refuel our vehicle.

Even if we don’t leave our home we still see many signs if we turn on the television.  Once again, signs selling goods and services, signs leading us to believe one thing or another, signs of the news and the weather, and signs telling us what show is coming on in the near future.

Jesus Christ and His apostles gave us signs to watch for, many signs, signs which are happening now, so many in fact that they are hard to keep up with!  These signs are telling us of what is soon coming, of what we should be doing, and even where we are headed.  Signs in the heavens, the moon and the stars, signs of wars and rumors of wars, signs of natural disasters, deception, persecution, of the increased evil and wickedness of society and man in general, these are all signs of the times!

There are signs that are easily seen and discerned.  However, there are also signs which are not so easily seen or discerned.  Signs of the weather are not written with words, yet they can be easily seen with the eye and with changing temperatures.  A sign that our job may not be so secure can be seen by layoffs in our chosen profession.  Signs of coming illness can be seen by not feeling so well, perhaps headaches and sore throats.  Signs that our children may be headed down the wrong road can be seen by dropping grades in school, changes in attitude, and/or interests in things which may not be considered as good.

We may also have signs that lead us to believe that our spouse may be cheating on us, perhaps they don’t seem interested in things which they used to enjoy, maybe they don’t spend as much time with us, or they stay out later than they used to, all signs that something other than life as usual may be in play.

My point is that there are signs which are easily seen and others which are not, many are signs of change, signs that what we are now experiencing is about to change in one way or another.

Signs told to us in scripture are given to us so that we may know what is coming, so that we can prepare and be ready.  They are signs that changes are coming soon, that we are in the season, that what was foretold thousands of years ago will happen!  They are signs that something unusual is in play, that life changing events are taking place in preparation for the coming of our Lord and Savior.

We cannot say without a doubt that we know when these things will occur yet we know that they will.  And isn’t this so with the bible also?  We know about changes which are coming, we have been given the signs to watch for, yet we don’t always know when they will take place!

This brings up the signs which many believers say will trigger the rapture of the church.  I am speaking about the Revelation 12 sign in the stars which some have said signifies the rapture of the church happening on September 23, 2017.  Well my friends as I have stated in the past, we cannot set dates!  September 23, 2017 is now gone and we are still here, at least I am, and I know that I am a saved, born-again child of God Almighty!  This should be a warning to all believers that we cannot nor should we set dates for the coming of the Lord, either at the rapture or His actual second coming after the Tribulation period!  We can know the season, that we are close, but we will not know the day or the hour.  And even though we may be able to count down to the second coming of Christ after the Tribulation period has begun, I don’t believe that we could count down to the exact day, we could always be off by a day or two.

Unfortunately there are some people who place their faith in dates, they place their faith in what others have told them about when bible prophecies will happen (the rapture of the church).  This will in fact cause many to lose faith, to turn away from God, many to disbelieve and walk away rather than to God!

It’s a good thing to be excited about the rapture of the church, to be waiting eagerly for His return for us, however, we should never say that we know the day or the hour.  This gives non-believers fuel for the fire, as many will in turn use these things as proof that the bible is not true, that the words given to us by our Lord are nothing more than fables and fairy tales, even though Jesus Christ Himself told us that no one knows the day or the hour, not even Him but our Father in heaven!

We are not only told to watch for the signs of the end times, but are commanded by Jesus Christ to do so!  We are to watch and be ready at all times!  If we open our eyes to the truth then we can see the signs, if we stay close to God then we can discern the signs.  When we discern the signs we are able to differentiate between signs that tell us the times we are living in from signs that don’t.  And when we can put the prophetic pieces of the puzzle together then it all makes much more sense to us.

The signs are all around us if we just look!  We are in the season of our Lord’s return, when will it happen?  I don’t know, no one does!  However, I do believe that it is soon.  Could it be this year, perhaps, or maybe the next, or the next, or who knows when.  But the bible does tell us in the parable of the fig tree that this generation will by no means pass away until all of these things take place.

“Assuredly, I say to you, this generation will by no means pass away till all these things take place.“

I am not here to argue about whether or not the fig tree represents the nation of Israel, which I believe that it does, nor if Jesus meant that this parable is speaking about the rebirth of Israel as a nation, which I do believe also, but to say that the generation which sees these things take place will not pass away until they do take place.  In other words, the generation which sees Israel reborn as a nation (among other things) will not pass away until Jesus comes to take us home and/or His second coming!  So what is a biblical generation in the last days?  Does Jesus mean the rapture of the church or His second coming?  Is it actually the generation alive during the rebirth of Israel as a nation or a generation in length of time from that event?

I don’t have all of the answers my friends, but I can say that the rebirth of Israel as a nation is a pivotal event and does signify the beginning of this end time period.  I also know that this happened in 1948, over 69 years ago.  I have heard that a generation is 70 years however I cannot confirm this. As far as this parable referring to either the rapture of the church or the second coming of Christ, does it really matter?!  I believe that one will precede the other in a relatively short period of time, either way it is the season and this is what truly matters!  The rapture of the church could happen at any time, we have no other prophetic events which must take place for this to happen.  On the other hand there are many, many bible prophecies which must take place prior to the second coming of Christ, events which are specifically laid out in detail in scripture.  Once all of these events take place then we know that the second coming of Jesus Christ is imminent.

And if the rapture of the church is preceded in a short period of time before the second coming of Christ, then we know by all of the signs given to us in scripture that we are living in the season!  We know of wars and rumors of wars which are now taking place, earthquakes in various places, natural disasters, deception at an all time high, increased persecution, society on a downward spiral, pestilence and famine, all now occurring with increased intensity and frequency as a woman giving birth, which I believe are signs that will take place before the rapture of the church.  We also know of wars which will happen, specifically the Ezekiel 38 war, and perhaps the Psalm 83 war, we know that the Antichrist will confirm a covenant with Israel, we know about the Mark of the Beast, the Abomination of Desolation, we also know of the wrath of God upon the world and the saved remnant of Jews during the Tribulation period, all of which must take place before Christ’s second coming.

I have listened to and watched many Christian programs where people ask the question: “Do all of these natural disasters mean that this is the end of the world?”  First of all it is not the “end of the world”, these prophecies represent the end of an “age”, the church age.  They signify the season of Christ’s return not the end of the world.  Second, the earth will in fact see its end, it shall be burned up along with the heavens and all that it contains, but this will not happen until after the one thousand-year rule and reign of Jesus Christ upon the earth.  Then He shall create a new heaven and a new earth, no more remnants of sin, no more evil and wickedness!

Do not be led astray by the signs of the times, do not be fooled into believing that specific biblical prophecies will occur on a specific date!  Watch and discern the times through the Holy Spirit.  Pray for wisdom and understanding.  Seek the good Lord in all that you do, keep the faith, and know that God loves you!

9 thoughts on “Discerning the Signs of the Times!”