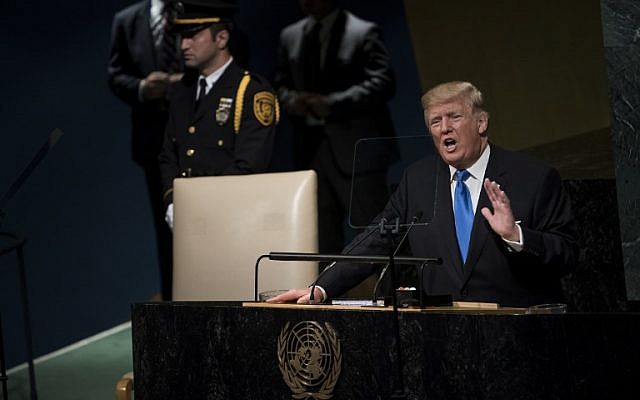 (SOURCE)    In his first speech at the United Nations General Assembly, US President Donald Trump issued a scathing rebuke of Iran and North Korea, blasting the “embarrassing” Iran nuclear deal and accusing the Islamic Republic of destabilizing the Middle East through its support of terror groups.

Trump said Iran, which “speaks openly of mass murder, death to America and the destruction of Israel,” exports “violence, bloodshed and chaos” throughout the Middle East through its funding of terror groups that threaten Israel and Arab countries.

“Rather than use its resources to improve Iranian lives, its oil profits go to Hezbollah and other terror groups that kill innocent Muslims and attack their Arab and Israeli neighbors,” he said, while adding that Iranian funds also “shore up [Syrian President] Bashar Assad’s dictatorship, fuel Yemen’s civil war and undermine peace in the entire Middle East.”

Speaking of the 2015 nuclear deal, which placed limits on Iran’s nuclear program in exchange for sanctions relief and which Trump said Monday that the US may scrap, he continued, “we cannot abide by an agreement if it it provides cover for the eventual construction of a nuclear program.”

“The Iran deal is one of the worst and most one-sided transactions the US has ever entered into to. Frankly, that deal was an embarrassment to the US,” he said, echoing his previous criticism of the deal.

Trump also called on the Islamic Republic to release a number of imprisoned Americans, while criticizing Iran’s “corrupt dictatorship” for censoring the internet and jailing political opponents.

“Iran’s people are what their leaders fear the most,” he said, expressing his hope that Iran would return to being the center of “civilization, culture and wealth” that it was before the 1979 Islamic Revolution.

In his speech, Trump also blasted North Korea, calling its rogue regimes and others like that in Iran “the scourge of our planet today” and saying, “If the righteous men don’t confront the wicked few, evil will triumph.”

Trump strongly condemned North Korea’s starvation, imprisonment and torture of its own people, while also mentioning its treatment of Otto Warmbier, an American Jew who was imprisoned by North Korea and released earlier this year after he became catatonic under unclear circumstances. He died shortly afterward.

Addressing North Korea’s nuclear and ballistic missiles program, Trump said, “No nation on earth has an interest in seeing this band of criminals arming itself with nuclear weapons and missiles.”

He also issued a pointed warning to North Korean leader Kim Jong-Un if war were to break out between the two countries over Pyongyang’s nuclear program.

“We will have no choice but to totally destroy North Korea. Rocket man is on a suicide mission for himself and his regime,” he said in reference to Kim. “It is time for North Korea to realize that denuclearization is its only acceptable future.”

Trump also called for reform at the UN, saying the US was paying too much to the world body and not getting its money’s worth. 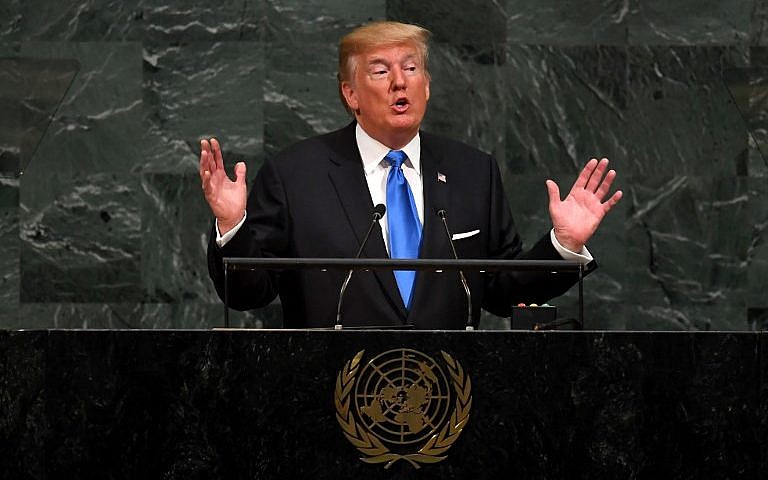 “The United States is one out of 193 countries in the UN and yet we pay over 20 percent of the budget. In fact we pay much more,” he said.

“If the UN could accomplish its stated goals, this investment would easily be worth it,” Trump added. But according to the US president, the international body is failing at its stated goal of providing peace and prosperity to the world.

“Major sections of the world are in conflict and some are going to hell,” he said.

“We hope the UN can one day be a much more effective advocate of human freedom and dignity in the world. In the meantime, we think that nations of the world should pay their dues and not only rely on the United States.”

Trump also addressed a number of other major international concerns, including China’s military expansion in the South China Sea, Russia’s annexation of Crimea and military intervention in Ukraine and the growing authoritarianism of Venezuela’s “socialist dictator” Nicolas Maduro.

In attendance at Trump’s speech was Prime Minister Benjamin Netanyahu, who is set to address the General Assembly later Tuesday. 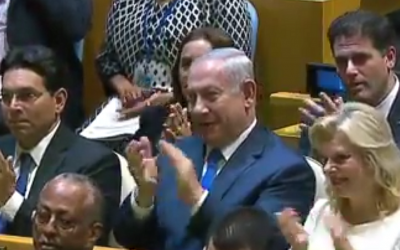 Netanyahu, along with his wife Sara and Israeli Ambassador to the UN Danny Danon, applauded when Trump said earlier in his speech, “I will always put America first,” just as all world leaders should put their countries’ interests first.

Notably absent from the speech was any mention of the Israeli-Palestinian conflict and attempts to reach a peace agreement.

“In the course of my 30-year acquaintance with the UN, I have never heard a speech that was sharper or more courageous,” Netanyahu said in a statement after the speech. “President Trump spoke the truth about the dangers lurking in the world, and called to forcefully confront them themselves to ensure the future of mankind.”

Raoul Wootliff and Raphael Ahren contributed to this report.