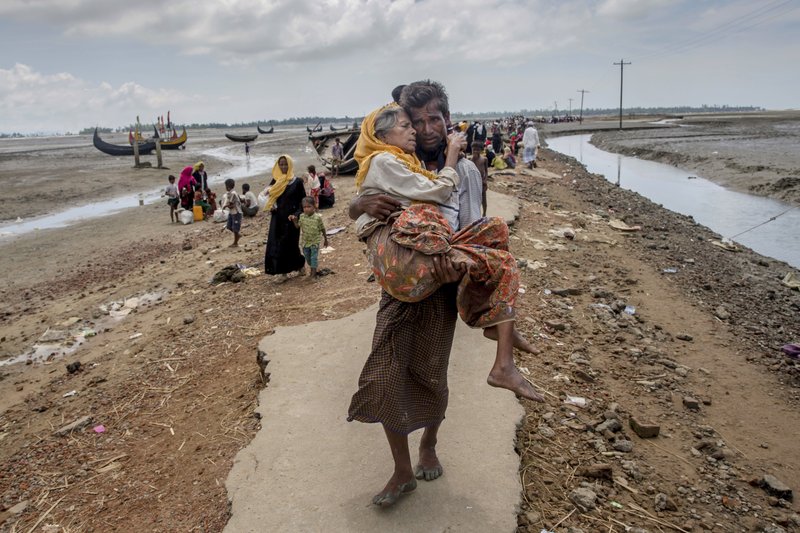 COX’S BAZAR, Bangladesh (AP) — Bangladeshi authorities on Sunday took steps to restrict the movement of Muslim Rohingya refugees living in crowded border camps after fleeing violence in Myanmar, while that nation’s military chief maintained the chaos was the work of extremists seeking a stronghold in the country.

Bangladesh has been overwhelmed with more than 400,000 Rohingya who fled their homes in the last three weeks amid a crisis the U.N. describes as ethnic cleansing. Prime Minister Sheikh Hasina, who lambasted Myanmar for “atrocities” during a visit to border camps last week, left Dhaka to address the annual U.N. gathering in New York.

Refugee camps were already beyond capacity and new arrivals were staying in schools or huddling in makeshift settlements with no toilets along roadsides and in open fields. Police were checking vehicles to prevent the Rohingya from spreading to nearby towns in an attempt to control the situation.

“There is an instruction from the prime minister that we must treat Rohingya Muslims maintaining human rights,” said A.K.M. Iqbal Hossain, a police superintendent. “As many private and social organizations are coming and distributing relief, sometimes chaos breaks out.”

He said with the scale of the crisis “it’s very difficult to keep order, but we are doing so.”

The refugees began pouring from Myanmar’s Rakhine state after a Rohingya insurgent group launched attacks on security posts Aug. 25, prompting Myanmar’s military to launch “clearance operations” to root out the rebels. Those fleeing have described indiscriminate attacks by security forces and Buddhist mobs.

The Myanmar government says hundreds have died, mostly “terrorists,” and that 176 out of 471 Rohingya villages have been abandoned. Myanmar has insisted that Rohingya insurgents and fleeing villagers are destroying their own homes. It has offered no proof to back these charges.

Ethnic Rohingya have faced persecution and discrimination in majority-Buddhist Myanmar for decades and are denied citizenship, even though many families have lived there for generations. The government says there is no such ethnicity as Rohingya and says they are Bengalis who illegally migrated to Myanmar from Bangladesh.

“The violence was an organized attempt of extremist Bengalis in Rakhine state to build a stronghold,” Myanmar’s powerful military chief Min Aung Hlaing said Saturday, according to a statement posted on his official Facebook page. “They have demanded recognition as Rohingya, which has never been an ethnic group in Myanmar.”

He called on the nation to be “united in establishing the truth” and for all the country’s citizens to “have unity with their love for the country,” including members of the media. 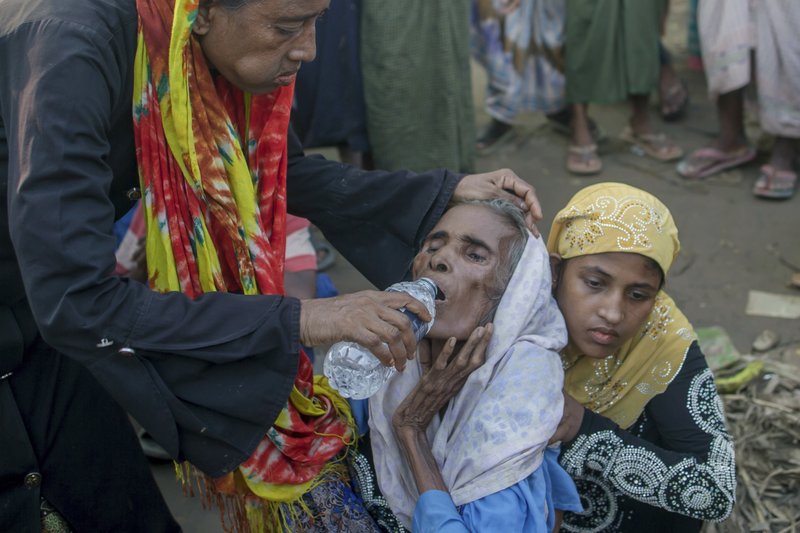 A Rohingya Muslim woman Mustafa Khatoon is given water by a passerby as her daughter Hazra Begum waits for help to take her to a doctor near Mushani refugee camp, Bangladesh, Saturday, Sept. 16, 2017. The U.N. has described the violence against the Rohingya in Myanmar as ethnic cleansing, a term that describes an organized effort to rid an area of an ethnic group by displacement, deportation or killing. (AP Photo/Dar Yasin)

With the U.N. saying there are some 240,000 children among the refugees living in dire conditions, Bangladeshi authorities have kicked off a massive immunization drive. Abdus Salam, the top government administrator in the Cox’s Bazar district hospital, said that some 150,000 children would be immunized over seven days for measles, rubella and polio.

“There are a lot of weak and malnourished children among the new arrivals,” UNICEF representative in Bangladesh, Edouard Beigbeder, said in an email. “If proper preventive measures are not taken, highly infectious diseases, especially measles, could even cause an outbreak.”

In a state hospital, a Rohingya man who identified himself as Rahmatullah was looking over his 10-year-old son recovering from a bullet that left a deep wound as it pierced his right leg.

“Why did they shoot him? What’s his crime? He is just a child,” Rahmatullah said. “They came and started shooting indiscriminately.”

Eric P. Schwartz, head of the U.S.-based charity Refugees International and a former assistant secretary of state for population, refugees and migration, said he couldn’t recall seeing so much misery in the camps and called for international pressure on Myanmar to stop the violence.

“The stories that we are hearing. I visited a hospital yesterday, children ages 1, 5, 10 suffered burn wounds, gunshot wounds and with human beings essentially treated like animals,” he said.

He said the U.S. should re-impose sanctions on Myanmar that were in place before it made transition from military to civilian rule.