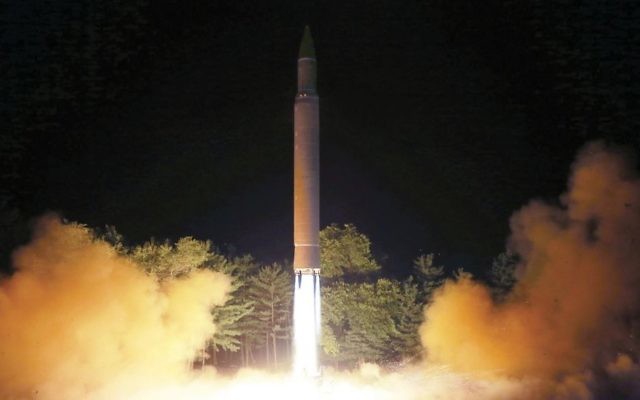 In this July 28, 2017, file photo distributed by the North Korean government on Saturday, July 29, 2017, shows what was said to be the launch of a Hwasong-14 intercontinental ballistic missile at an undisclosed location in North Korea. (Korean Central News Agency/Korea News Service via AP, File)

The launch, from near Pyongyang, came after the United Nations Security Council imposed an eighth set of sanctions on the country over its banned missile and nuclear programs.

That was in response to its sixth nuclear test — by far its largest yet — earlier this month, which Pyongyang said was a hydrogen bomb small enough to fit onto a missile.

The North has raised tensions in the region with its rapid progress in weapons technology under leader Kim Jong-Un, who is closely associated with the program and regularly pictured by state media overseeing launches and visiting facilities.

Its last missile launch, a Hwasong-12 intermediate range missile just over two weeks ago, also overflew Japan — its first to do so for years — sparking emergency sirens and text alerts, before coming down in the Pacific Ocean. 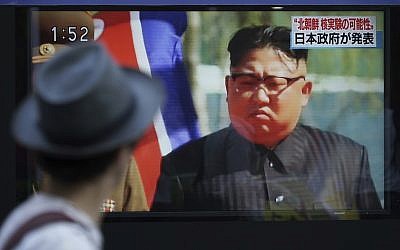 Friday’s missile flew over Hokkaido in northern Japan “at around 07:06 am (2206 GMT) towards the Pacific Ocean”, Japan’s J-Alert system said, with reports saying it came down around 2,000 kilometers east of Hokkaido.

Seoul’s defense ministry said it probably traveled around 3,700 kilometers and reached a maximum altitude of 770 kilometers — both higher and further than the previous device.

It was fired from a similar location near the capital’s airport, it added.