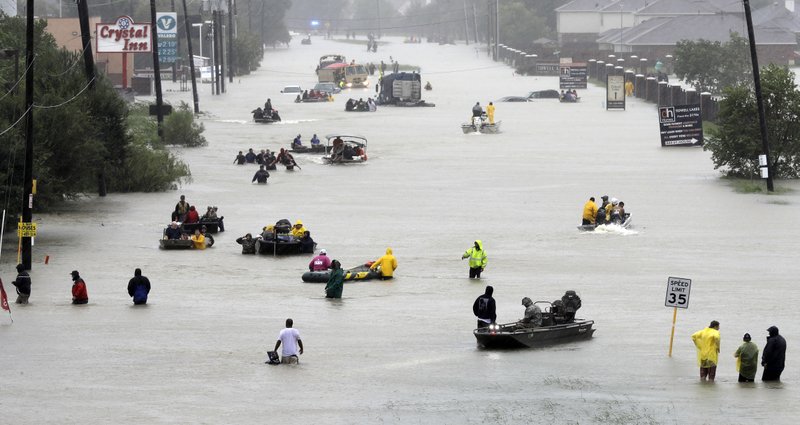 HOUSTON (AP) — Crews overwhelmed by thousands of rescue calls during one of the heaviest downpours in U.S. history have had little time to search for other potential victims, but officials acknowledge the grim reality that fatalities linked to Harvey could soar once the devastating floodwaters recede from one of America’s most sprawling metropolitan centers.

More than three days after the storm ravaged the Texas coastline as a Category 4 hurricane, authorities had confirmed only three deaths — including a woman killed Monday when heavy rains dislodged a large oak tree onto her trailer home in the small town of Porter. But unconfirmed reports of others missing or presumed dead were growing.

“We know in these kind of events that, sadly, the death toll goes up historically,” Houston police Chief Art Acevedo told The Associated Press. “I’m really worried about how many bodies we’re going to find.”

One Houston woman said Monday that she presumes six members of a family, including four of her grandchildren, died after their van sank into Greens Bayou in East Houston, though Houston emergency officials couldn’t confirm the deaths. Virginia Saldivar told The Associated Press her brother-in-law was driving the van Sunday when a strong current took the vehicle over a bridge and into the bayou. The driver was able to get out and urged the children to escape through the back door, Saldivar said, but they could not.

And a spokeswoman for a Houston hotel says one of its employees disappeared while helping about 100 guests and workers evacuate the building amid rising floodwaters.

The disaster is unfolding on an epic scale, with the nation’s fourth-largest city mostly paralyzed by the storm that has parked itself over the Gulf Coast. With nearly 2 more feet (61 centimeters) of rain expected on top of the 30-plus inches (76 centimeters) in some places, authorities worried the worst might be yet to come.

Early Tuesday, Harvey’s relentless downpour continued to drench Houston and the surrounding area. Rain fell at a pace of about half an inch (1 centimeter) per hour over Harris County — home to Houston — and up to 2 inches (5 centimeters) per hour to the east.

The Houston metro area covers about 10,000 square miles (25,900 sq. kilometers), an area slightly bigger than New Jersey. It’s crisscrossed by about 1,700 miles (2,700 kilometers) of channels, creeks and bayous that drain into the Gulf of Mexico, about 50 miles (80 kilometers) to the southeast from downtown.

The storm is generating an amount of rain that would normally be seen only once in more than 1,000 years, said Edmond Russo, a deputy district engineer for the Army Corps of Engineers, which was concerned that floodwater would spill around a pair of 70-year-old reservoir dams that protect downtown Houston.

President Donald Trump was expected in Corpus Christi, Texas, and Austin Tuesday for briefings on the first major natural disaster of his administration, accompanied by first lady Melania Trump. And Vice President Mike Pence said in an interview with News Radio 1360 KKTX in Corpus Christi that he and his wife, Karen, will visit southeast Texas later this week.

The impact of Harvey is also already being felt in Lake Charles, southwestern Louisiana, where emergency crews have been rescuing residents from their flooded homes after steady overnight rainfall.

Forecasters expect the storm to creep eastward as far as Mississippi by Thursday, meaning New Orleans, where Hurricane Katrina unleashed its full might in 2005, is in Harvey’s path. Foreboding images of Harvey were lighting up weather radar screens early Tuesday, the 12th anniversary of the day Katrina made landfall in Plaquemines Parish.

Rescuers meanwhile continued plucking people from inundated Houston neighborhoods. Mayor Sylvester Turner put the number by police at more than 3,000. The Coast Guard said it also had rescued more than 3,000 by boat and air and was taking more than 1,000 calls per hour.

Chris Thorn was among the many volunteers still helping with the mass evacuation that began Sunday. He drove with a buddy from the Dallas area with their flat-bottom hunting boat to pull strangers out of the water. 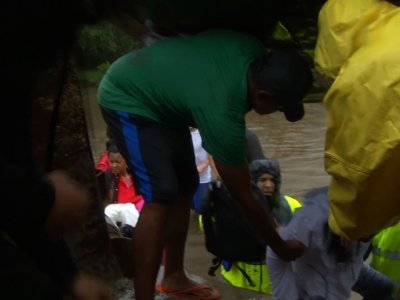 “I couldn’t sit at home and watch it on TV and do nothing since I have a boat and all the tools to help,” he said.

A mandatory evacuation was ordered for the low-lying Houston suburb of Dickinson, home to 20,000. Police cited the city’s fragile infrastructure in the floods, limited working utilities and concern about the weather forecast.

Nearly 6,000 inmates displaced by flooding have been moved from prisons in the Houston area to other facilities in South and East Texas, according to the state Department of Criminal Justice.

In Houston, questions continued to swirl about why the mayor did not issue a similar evacuation order.

Turner has repeatedly defended the decision and did so again Monday, insisting that a mass evacuation of millions of people by car was a greater risk than enduring the storm.

“Both the county judge and I sat down together and decided that we were not in direct path of the storm, of the hurricane, and the safest thing to do was for people to stay put, make the necessary preparations. I have no doubt that the decision we made was the right decision.”

He added, “Can you imagine if millions of people had left the city of Houston and then tried to come back in right now?” 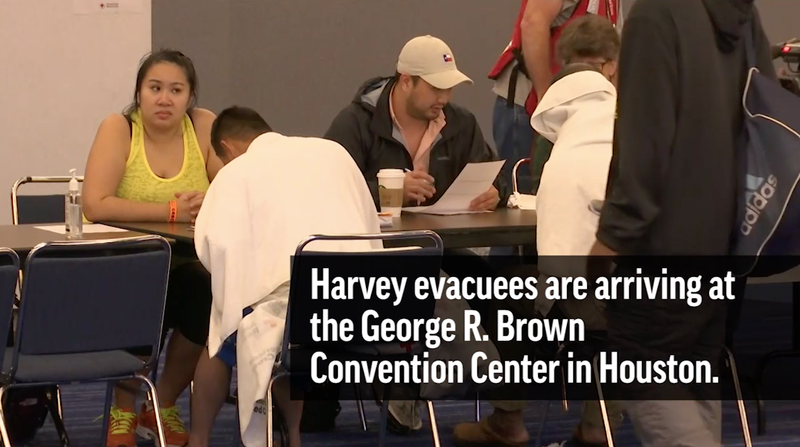 By Monday night, 7,000 people had arrived at the city’s largest shelter set up inside the George R. Brown Convention Center — which originally had an estimated capacity of 5,000.

Red Cross spokesman Lloyd Ziel said that volunteers made more space inside the center, which also was used to house Hurricane Katrina refugees from New Orleans in 2005, in part by pushing some cots closer together. A shortage of cots means some people will have to sleep on chairs or the floor.

The center settled down at night, after an occasionally chaotic day that saw thousands of evacuees arrive in the pouring rain. Officers and volunteers at times rushed to attend to those with medical needs.

At the Addicks and Barker reservoirs, the Army Corps started releasing water Monday because water levels were climbing at a rate of more than 6 inches (15 centimeters) per hour, Corps spokesman Jay Townsend said.

The move was supposed to help shield the business district from floodwaters, but it also risked flooding thousands more homes in nearby subdivisions. Built after devastating floods in 1929 and 1935, the reservoirs were designed to hold water until it can be released downstream at a controlled rate.

In the Cypress Forest Estates neighborhood in northern Harris County, people called for help from inside homes as water from a nearby creek rose to their eaves. A steady procession of rescue boats floated into the area.

Harvey increased slightly in strength Monday as it drifted back over the warm Gulf, according to the National Hurricane Center. 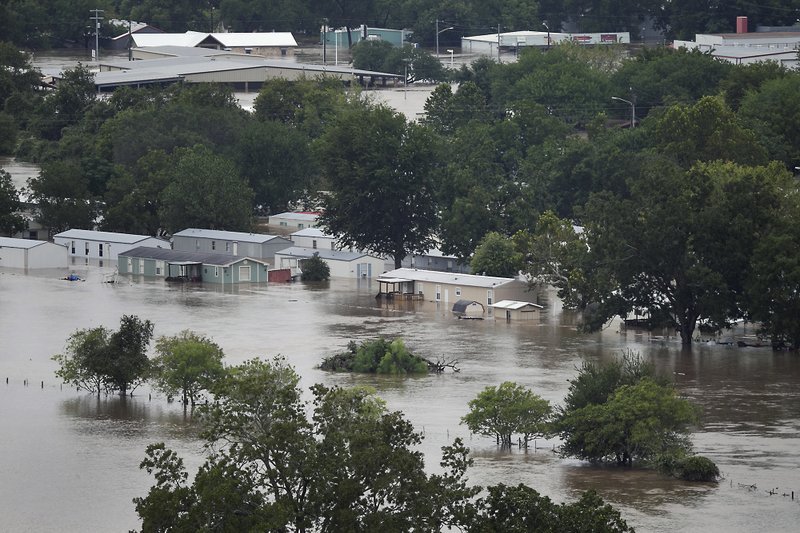 Forecasters expect the system to stay over water with 45 mph (72 kph) winds for 36 hours and then head back inland east of Houston sometime Wednesday. The system will then head north and lose its tropical strength.

Before then, up to 20 more inches (51 centimeters) of rain could fall, National Weather Service Director Louis Uccellini said Monday.

That means the flooding will get worse in the days ahead and the floodwaters will be slow to recede once Harvey finally moves on, the weather service said.

Sometime Tuesday or early Wednesday, parts of the Houston region will probably break the nearly 40-year-old U.S. record for the biggest rainfall from a tropical system — 48 inches (120 centimeters) — set by Tropical Storm Amelia in 1978 in Texas, meteorologists said.

The amount of water in Houston was so unprecedented that the weather service on Wednesday had to update the color charts on its official rainfall maps to indicate the heavier totals.

In Louisiana, the images of the devastation in Houston stirred painful memories for many Hurricane Katrina survivors.

“It really evoked a lot of emotions and heartbreak for the people who are going through that now in Houston,” Ray Gratia said as he picked up sandbags for his New Orleans home, which flooded during the 2005 hurricane.

In Washington, President Donald Trump’s administration assured Congress that the $3 billion balance in the Federal Emergency Management Agency’s disaster fund was enough to handle immediate needs, such as debris removal and temporary shelter for displaced residents.

The White House said Monday night that the president and first lady will visit Corpus Christi and Austin on Tuesday. They will receive briefings on the relief efforts by local leaders and organizations.

Harvey was the fiercest hurricane to hit the U.S. in 13 years and the strongest to strike Texas since 1961′s Hurricane Carla, the most powerful Texas hurricane on record.

Associated Press writers Juan Lozano and Nomaan Merchant in Houston and David Warren in Dallas contributed to this report.