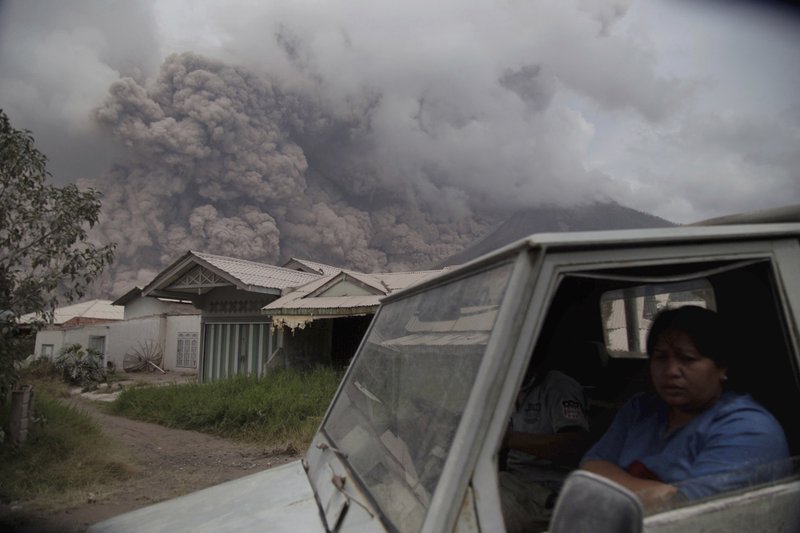 Residents ride in a truck as Mount Sinabung releases pyroclastic flows during its eruption in Karo, North Sumatra, Indonesia, Wednesday, Aug. 2, 2017. The volcano blasted volcanic ash as high as 4.2 kilometers (2.6 miles), one of its biggest eruptions in the past several months of high activity. (AP Photo/Endro Rusharyanto)

JAKARTA, Indonesia (AP) — Mount Sinabung on the Indonesian island of Sumatra blasted volcanic ash as high as 4.2 kilometers (2.6 miles) on Wednesday, one of its biggest eruptions in the past several months of high activity.

Hot ash tumbled down the mountain’s slopes as far as 4.5 kilometers (2.8 miles) east and southeast into the Labortus River.

Media reports said students from an elementary school in Kuta Rakyat were sent home because volcanic ash covering the village was considered dangerous. There were no reports of casualties.

He warned villagers to stay out of a danger zone that extends as far as 7 kilometers (4.4 miles) from the peak.

He called on people to be vigilant about the possibility of flash floods and lava flows because Wednesday’s eruption created a natural dam on the upper reaches of the Laborus River.

The 2,460-meter (8,070-foot) high Sinabung burst back to life in 2010 after a long period of dormancy. The volcano has been erupting sporadically ever since, killing 17 people and forcing more than 30,000 to evacuate their villages.