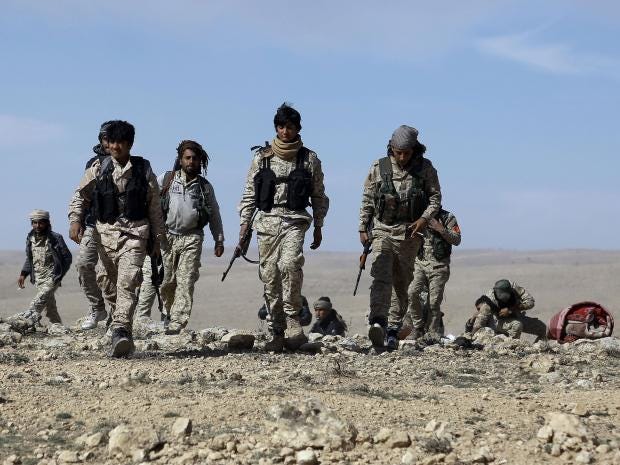 Fighters from the Syrian Democratic Forces (SDF) gather on the outskirts of the town of al-Shadadi in the northeastern Syrian province of Hasakeh, on 19 February, 2016 DELIL SOULEIMAN/AFP/Getty Images

The March 22 airlift marked a deepening of U.S. involvement in Syria’s conflict ahead of a looming battle for Raqqa, the capital of the extremist group’s self-styled caliphate. SDF fighters captured an airfield outside Tabqa last week and have been trying to gain control of a major dam nearby.

Elsewhere in Syria, IS militants killed 33 young men in eastern Syria, close to the border with Iraq, according to Syrian opposition activists.

The Observatory said IS members slit the throats of the men, aged 18 to 25, near the town of Mayadeen in Deir el-Zour province on Wednesday. The group said it’s not clear who the men were or whether they were Syrian troops or rebels.

Opposition activist Omar Abu Laila, who is from Deir el-Zour but currently lives in Europe, also reported the killings. He said IS did not give any reason for the killings or say what the men were charged with.

Abu Laila said IS killed four other people in a different area on Syria’s border with Iraq. He said the men were accused of collaboration with the U.S.-led coalition that has been targeting IS with airstrikes for more than two years.