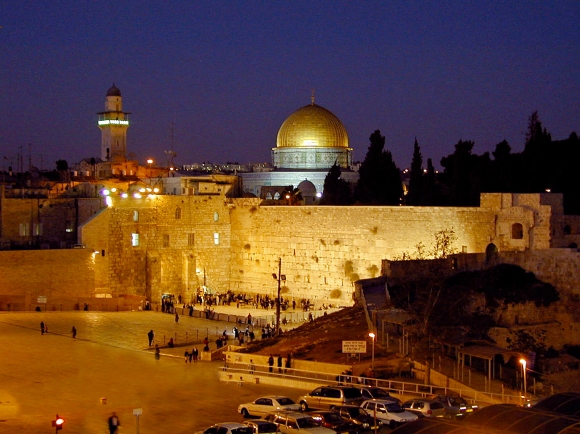 The Middle East is a powder keg just waiting to explode at any minute!  The world has been consumed with “peace” between the so-called Palestinians and the Israelis for decades now, and the world is now fully intoxicated with bringing together peace in the Middle East.

Why is it that the world is so focused on peace in the Middle East anyway?!  I mean, there are plenty of other places in the world that need peace, Africa, Asia, Europe, but no, the world has been focused on bringing peace to Israel, Jerusalem, and the Palestinians.  There are many other crises in the world which need to be addressed such as starvation and disease, but the world is focused on a peace accord with Israel, with dividing the land God gave to the Jews thousands of years ago.

Why is it that Israel and Jerusalem are such hot topics and lead the world in resolutions and accords?  It isn’t just by chance my friends, it’s biblical!  There is no other reason except that the Jews are God’s chosen people and both Israel and Jerusalem belong to God Almighty!

“Behold, I will make Jerusalem a cup of drunkenness to all the surrounding peoples, when they lay siege against Judah and Jerusalem. 3 And it shall happen in that day that I will make Jerusalem a very heavy stone for all peoples; all who would heave it away will surely be cut in pieces, though all nations of the earth are gathered against it.“

The Lord has made Jerusalem a cup of drunkenness to all of the surrounding people!  Bible prophecy is being fulfilled right before our very eyes!  It’s not by chance that all of this is happening, but by God’s will.  If not then why don’t the surrounding Arab nations just give up some land to the Palestinians so that they can have their own state?!  After-all they have plenty of it, most of it given to the Jews by God in the first place.  But no!  We haven’t heard a word from any Arab nation willing to give up even a sliver of land so that these so-called Palestinians can have their own state.

Why is that?  It’s because they don’t want their own state!  They want the total annihilation of the Jews and to desecrate what God has ordained as holy, specifically Jerusalem and the temple mount.

And now we see bible prophecy being further fulfilled with the United Nations and the Paris peace conference both recognizing the Palestinians as a people and a nation, siding with them to divide Israel and Jerusalem!

It’s crazy, it’s madness, and it is foretold to happen in the old testament!

Confusion, madness, and blindness!  Isn’t that what we now see happening in the world today?  The world is confused, full of madness, and blinded to the truth!  Deception is running at an all time high and the wicked cannot see what is staring at them right in front of their own face!

“But evil men and impostors will grow worse and worse, deceiving and being deceived.“

The world is at odds with itself, deceivers and imposters are growing worse and worse, both deceiving and being deceived.  The truth is blinded to those following the wicked one and their hearts are made of stone, their eyes are blinded and their ears do not hear, these are the end times!

Do not be led astray by false teachings, by deceptive lies, and by cunning plans.  Read the word of God and know what it says!  Understand what the Lord is telling us, listen to His voice.  There will be many these days seeking to lead astray, seeking to devour whomever they can.  They will devise wicked and evil plans, rebelling against what is righteous and holy, rebelling against the One who created them all, Jesus Christ!

Love the Lord your God with all of your heart, soul, mind, and strength!  Seek Him first in all things, and do not grieve the Holy Spirit!

2 thoughts on “A Cup of Drunkenness is at Hand!”