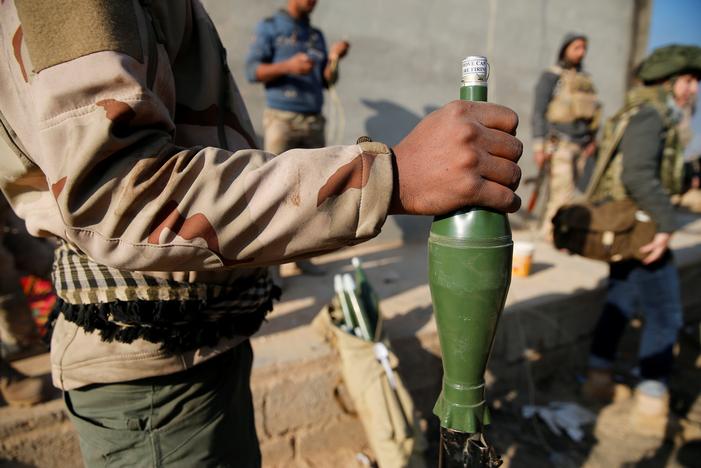 A member of the Iraqi Army carries anti missiles during clashes with Islamic State militants at the south of Mosul, Iraq December 12, 2016. REUTERS/Ammar Awad

(SOURCE)   Several thousand Iraqi federal police are ready to join the assault against Islamic State in east Mosul, a spokesman said on Monday, reinforcing troops who have faced weeks of fierce counter-attacks from the militants.

The extra forces are being deployed as the grueling U.S.-backed campaign to crush Islamic State in its Iraqi stronghold enters its ninth week. Elite army troops have retaken a quarter of the city, but their advance has been slow and punishing.

The federal police units, around 4,000 strong, have been moved to southeast of the city, near an area where an army tank division last week made the deepest incursion into Mosul so far, briefly seizing a hospital used as a base by the militants.

The troops were forced to pull back from the Salam hospital, less than a mile (about 1 km) from the Tigris river which runs through the center of Mosul, when they were attacked by suicide car bombs, mortar volleys and machine gun fire.

A spokesman for Iraq’s federal police commander, Lieutenant-General Raed Shakir Jawdat, said the three brigades from the police Fifth Division were ready to move in, although he suggested they might not go into action immediately.

They are currently near Qaraqosh, about 15 km (10 miles) from the southeast edge of the city and are “fully prepared now to start the attack to control the eastern side of Mosul,” the spokesman said.

However he said they were waiting for advances elsewhere on the eastern front, where elite Counter Terrorism Services (CTS) have made steady street-by-street progress, unlike last week’s dramatic push by the armored division towards the hospital.

“We are waiting for orders from the supreme commanders to start the offensive to defeat Daesh (Islamic State) and clear the eastern part (of Mosul),” he said.

The CTS forces said on Sunday they had captured another district of east Mosul, the al-Nour neighborhood.

Accounts from Mosul are difficult to confirm since authorities have increasingly restricted international media access to the battlefronts and areas retaken from Islamic State in and around the city.

The police and CTS troops are part of a 100,000-strong Iraqi alliance which launched the campaign to retake Mosul on Oct. 17. It includes soldiers, security forces, Kurdish peshmerga fighters and mainly Shi’ite Popular Mobilization forces, and is backed by a U.S.-led international coalition.

Defeating Islamic State in Mosul, the biggest city it controls in Iraq or Syria, would be a crushing blow to the self-styled caliphate it declared in large parts of both countries two years ago, and might see it revert to more covert militant operations in Iraq.

Iraqi commanders say progress has been slowed by the fierce defence waged by the jihadists, who they say have used a network of tunnels under the eastern half of the city and exploited more than 1 million civilians as human shields.

The fight in crowded residential areas has also restricted the use of heavy weapons and air strikes from the U.S.-led coalition, the military says.

For weeks, commanders have also talked about opening a new front in southwest Mosul to stretch Islamic State defences. But the despatch of the units to the southeast may delay that plan.

The forces in Qaraqosh had been due to join other police units who have reached within 3 or 4 km (2 or 3 miles) of the airport on Mosul’s southwestern edge, and were expected to open the new front inside the city on the west bank of the Tigris.

Nearly two months into the campaign, the United Nations says 91,000 people have been registered as displaced from Mosul and nearby towns and villages. That figure excludes thousands more forced as human shields back into Mosul by retreating militants.

Most people though have stayed put, and 1 million are likely to be still living in remaining Islamic State-held areas of the city. With the militants largely sealed off, civilians are enduring increasingly siege-like conditions, with shortages of fuel, food and water as winter sets in.