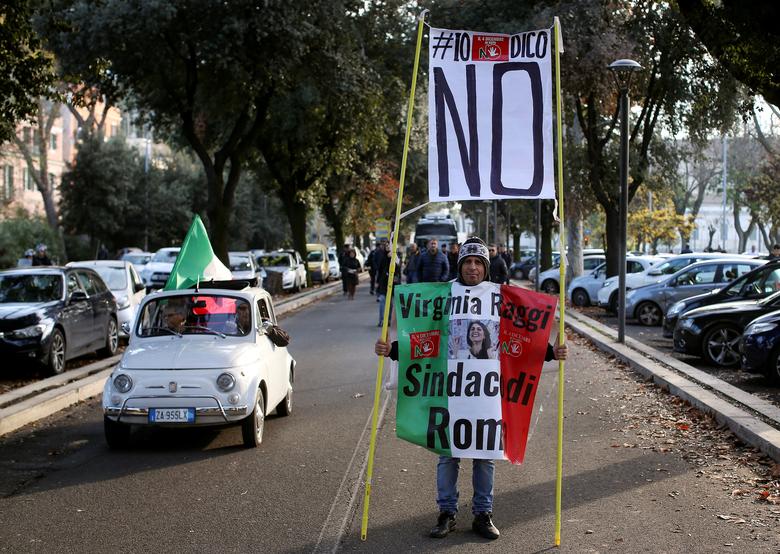 A man holds a banner reading ”I say no” during a march in support of the ‘No’ vote in the constitutional reform referendum in Rome, Italy November 26, 2016. REUTERS/Alessandro Bianchi/File Photo

(SOURCE)   The resounding “no” from Italian voters to Prime Minister Matteo Renzi’s referendum on constitutional reform was not a rejection of the European Union and its single currency, as jubilant populists from across the bloc claimed on Monday.

But the vote, which pushes Renzi out of office, does represent a significant setback for Europe at a time when its leaders are scrambling to mount a credible response to Brexit, the election of Donald Trump in the United States and their stubborn economic woes at home.

In one fell swoop, it adds another country to the list of EU members that are likely to be pre-occupied by domestic politics in 2017, a year in which the Dutch, French, Germans, and possibly the British, will go to the polls.

And it sends a warning to other European reformers like Francois Fillon, the conservative frontrunner for the French presidency, who has promised no less than five referendums to push through his domestic agenda if he is elected next spring.

More immediately, despite the relatively calm reaction of financial markets on Monday, the vote will deepen concerns about Italy’s under-funded banking sector and the economic prospects of the euro zone’s third biggest member state.

That, in turn, could complicate the calculus for the European Central Bank, which meets on Thursday to decide on the future of its controversial bond purchase program.

“This won’t push Italy back into crisis for now,” said Marcel Fratzscher, head of the DIW economic institute in Berlin and a former top official at the European Central Bank.

“But it means lost time for a country that faces huge problems with its banks, its enormous public debt levels and high unemployment. There is a significant danger that the reform course will now slow.”

Renzi, seen by his European partners as an anchor of stability in a country where political upheaval has been the norm for decades, won just over 40 percent of the vote in the referendum, a far worse result than polls had predicted.

His defeat comes only days after deeply unpopular French President Francois Hollande, also a leftist, bowed to political realities and announced he would not seek a second term.

Renzi’s departure could lead to early elections in Italy next year. It increases the risks of the anti-euro 5-Star Movement gaining power, although the prospect of that remains slim.

After the Brexit vote went bad for David Cameron in June, it is the second time in half a year that the leader of a major EU member state tied his future to a referendum and lost, a development that was seized upon by the region’s anti-EU firebrands.

“This vote looks to me to be more about the euro than constitutional change,” added Nigel Farage of the UK Independence Party (UKIP).

But unlike Britain, polls show that a solid majority of Italian voters are in favor of both the EU and the euro. They were encouraged to vote “no” by all of the major parties in Italy outside of Renzi’s Partito Democratico (PD).

His defeat therefore, which came on the same day that Austrian voters sent a far-right candidate to defeat in a presidential run-off, looks less like a rejection of Europe and the political establishment, and more like a serious miscalculation on the part of Renzi.

“When a prime minister who will always be remembered for taking office through an old-style party coup calls a national referendum in a country that’s still struggling to emerge from a triple-dip recession, he can expect an unfavorable result,” said Nicholas Spiro of Lauressa Advisory.

That won’t cushion the impact for Europe, whose leaders have promised to unveil their post-Brexit vision for the EU in the Italian capital next March, the 60th anniversary of the bloc’s founding Rome treaty. Who will host that summit is now an open question.

The same month, Dutch voters will go to the polls and British Prime Minister Theresa May is expected to invoke Article 50 of the EU treaty, triggering a tight two-year countdown to Brexit — a timeline made all the more challenging by Europe’s heavy election calendar.

Only a month later, the first round of the French election will take place.

Polls suggest that will produce a showdown between Le Pen and Fillon, the hardline conservative who is advocating a radical overhaul of the French economy through deep cuts in public sector jobs and the scrapping of the 35-hour workweek.

Fillon has proposed a total of five referendums: one to enshrine a balanced budget law in the constitution, a second to overhaul French territorial authorities, a third to unwind France’s generous pension regimes, a fourth on immigration quotas and a fifth – in an echo of Renzi’s own referendum – to reduce the number of parliamentarians.

Far more than the Italian referendum, the French vote is shaping up as a make-or-break moment for Europe and its political mainstream. Fillon, no doubt, will be watching what is now unfolding in France’s southern neighbor as he girds for battle.

“The French election will be the crucial test for Europe,” said Dominique Moisi of the Institut Montaigne. “To counter Le Pen, Fillon may have to move to the center. He will have to put quite a bit of water in his traditionalist wine.”