Egyptian workers harvest wheat in Banha, north of Cairo. For most Egyptians, rising food prices are the most critical problem. Photograph: Khaled Elfiqi/EPA

(SOURCE)   Egypt is suffering its worst economic crisis since the Great Depression, a former finance minister of the country and one of its leading economists have warned.

In terms of its devastating effect on Egypt’s poorest, the country’s current economic predicament is at its most dire since the 1930s, Galal Amin, professor of economics at the American University in Cairo, and Samir Radwan, finance minister in the months after Egypt’s 2011 uprising, said in separate interviews with the Guardian.

Since the fall of Hosni Mubarak in 2011, Egypt has experienced a drastic fall in both foreign investment and tourism revenues, followed by a 60% drop in foreign exchange reserves, a 3% drop in growth, and a rapid devaluation of the Egyptian pound. All this has led to mushrooming food prices, ballooning unemployment and a shortage of fuel and cooking gas – causing Egypt’s worst crisis, said Amin, “without fear of making a mistake, since the 30s”.

“Nobody cares about the poor now,” Amin said. During comparable crises in the late 1960s, the mid-70s and the late 80s, Amin and Radwan argued that Egypt’s poorest were variously shielded from absolute hardship either by state subsidies, overseas aid, comparatively low unemployment, or by remittances from expatriates in the Gulf states. But now one in four young Egyptians is unemployed, household remittances are low, and there is a shortage of subsidised goods.

“You are talking about nearly half of the population being in a state of poverty,” said Radwan, a development economist. “Either in absolute poverty or near-poor, meaning that with any [economic] shock, like with inflation, they will fall under the poverty line.” Currently, 25.2% of Egyptians are below the poverty line, with 23.7% hovering just above it, according to figures supplied by the Egyptian government.

For most Egyptians, rising food prices are the most critical problem. Some goods have doubled in price since last autumn – catastrophic for the quarter of families that already spend 50% of their income on food.

For Hoda Goma, a Cairo architect, the situation is having a serious effect on her two eight-year-old sons. “They’re getting worse at school,” she said. “They’re getting ill more often. They have these black patches under their eyes and their teeth have got worse.” 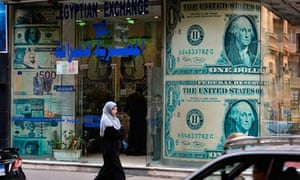 A currency exchange in Cairo. The value of the Egyptian pound has fallen by 12% against the dollar since December. Photograph: Khaled Desouki/AFP/Getty Images

It is down to their diet, Goma explained. She cannot afford to feed them what they need. Six months ago she spent half her salary on food. Now she says it is closer to four-fifths – not because she is earning less, but because rising food prices show no sign of slowing down.

As a result, consumers are either buying less, or not buying at all. “It’s impossible,” said Ali. “I’ve lost half my customers. People can only afford to buy basic foods.” At his two-storey market in central Cairo, the top floor is now entirely empty. Neighbours said all stall-holders on the upper level had been forced to close in recent months.

Inflated food prices are not a new phenomenon in a country that is the world’s biggest importer of wheat, where the population has long risen more rapidly than production, and where up to half of the produce rots in the heat on the way to market. But the recent rate of inflation has been significantly raised by Egypt’s disastrous economic predicament.

Most problematically, the value of the Egyptian pound has fallen by 12% against the dollar since December. For two years, Egypt’s central bank had used its foreign currency reserves to arrest the slide – but with those reserves having shrunk by around 60% since 2011, the bank had to abandon the tactic last winter. As a result, the pound’s value has this year fallen further and faster. In turn, it has become much more expensive to import foreign goods – catastrophic for a country that buys in 60% of its wheat, and whose farmers also often rely on imported fertiliser, fuel and animal feed.

“They have a serious crisis on their hands,” said the EU’s envoy to Egypt, James Moran, who noted that Egypt’s foreign reserves had fallen from $36bn (£24bn) three years ago to $14.4bn last month. “This gives you less than three months’ import coverage – and in an import-dependent economy, this is quite dangerous.”

“We are suffering,” said Ali Eissa, the chairman of Nahdet Misr, a farm company which grows potatoes and oranges on 3,000 acres across Egypt. “It’s impacted most of our fertilisers, machines, tractors – all their prices have dramatically increased.”

The pound’s devaluation has also made it harder for the Egyptian government to import fuel. The state has subsidised diesel (along with goods such as bread, cooking gas and fertiliser) since the dictatorship of Gamal Abdel Nasser. But with those subsidies now accounting for over a fifth of the Egyptian budget, and with a budget deficit of 13%, the state cannot afford to support the population at the level it once did. As a result, there are daily shortages at pumps across Egypt, long queues – and, at times, fatal fights.

“Last month, we couldn’t find any diesel,” said Eissa, who was consequently forced to turn to the black market, where he says fuel prices are between 40% and 80% higher than their legal rate. “The worst thing is that most of the black market quantities are mixed with water – which is breaking a lot of our machines. We have to change the filter, get them maintained, stop the irrigation, stop the tractors.” 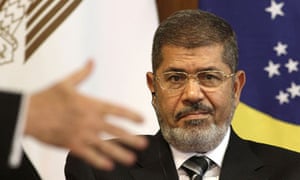 In turn, farmers must sell their crops for higher prices – and with the government also under pressure to cut subsidies, food is therefore increasingly unaffordable for the poorest Egyptians. “The rich can take care of themselves,” said Karim Abadir, professor of econometrics at Imperial College London, and a co-founder of the Free Egyptians, an opposition party. “But the poor of Egypt are really, really poor. Their daily diet is just bread. First of all, that’s a terrible diet. Secondly, they’re not even going to afford that. And the government has nothing in place to provide them with a safety net when they have to raise prices and cut subsidies.” So far, Mohamed Morsi’s Islamist-led government has attempted to keep Egypt afloat with short-term measures. It has accepted loans and grants worth more than $5bn from Gulf states such as Qatar, and interest-free fuel handouts from neighbouring Libya. Domestically, it has avoided major economic reforms that might cause short-term upheaval – perhaps, when the then dictator Anwar Sadat first temporarily tinkered with subsidies. Instead, Morsi has focused mainly on meaningless initiatives such as tax rises on peripheral imports such as shrimp and nuts, or closing shops early at night to save electricity. Morsi has also attempted to legalise the controversial sukuk, an Islamist form of government bond that may help to bring in more short-term cash.

“There is no vision, there is no vision whatsoever,” said Radwan of the government’s current economic ministers. The Egyptian finance ministry did not make any official available for interview.

Along with Amin, Radwan said the initial route out of the crisis was obvious. The government needed to take the lead in restoring calm to the polarised Egyptian street and its tumultuous political sphere. National stability would give investors the confidence to reopen the 1,500 factories that have closed since 2011, and encourage tourists – whose spending was once worth $1bn a month to the Egyptian economy – to return.

“Restore stability, restore tourism, and restore confidence from investors,” summarised Amin. Such a process would raise employment, and so lift millions from poverty, gradually allowing the government to end food subsidies for those who would no longer need them.

“It has to be spread over a period of time otherwise the social consequences would be very dire,” said Amin. “As you succeed in raising the income of the poor, you [can] reduce the subsidy.”

The delivery of a much-delayed $4.8bn International Monetary Fund loan – and a further $12bn in contingent loans from the EU and elsewhere – depends on Egypt’s agreement to such reforms. Without the loan, foreign investment – which has fallen by 56% since 2011 – is also unlikely to return.

Radwan said: “I regard the IMF loan, which I was the first to negotiate, and it was turned down, as the key. Not because of the sum. But because if you sign with the IMF, it means you have a sound financial and monetary programme to get you out of the crisis.”

Not everyone agrees. Amin sees the loan as too small to make much difference in itself. Instead, he suggests Egypt should enact the reforms the IMF suggests without taking on the debt itself. “What is the use of this $4.8bn sum?” Amin asked. “It is a big sum, but it still less than what tourism used to bring you. The conclusion is that the loan from the IMF is neither necessary nor sufficient. Not necessary because by attacking the real problems, you can dispense with it – and not sufficient, because if you don’t attack the real problems it doesn’t help you very much. It’s only short-term relief.”

Whatever happens, while politicians prevaricate, ordinary Egyptians are being ever more compromised by the soaring cost of living. Mostafa, a 30-year-old driver, started dealing hashish late last year when his wife became pregnant, realising his monthly earnings of 1,500 Egyptian pounds, or £150, would not be enough to feed his enlarged family. “Without the drug dealing, I would only have 300 Egyptian pounds [£30] to pay for everything after rent and food,” Mostafa said. “How would I be able to support my new children?”

Economists often predict a so-called “revolution of the hungry”, should conditions worsen further. But for Radwan, Egypt is already at that stage: robbery rose 350% in 2012 as Egyptians took wealth redistribution into their own hands. “The elite sits there saying the revolt of the hungry is coming,” said Radwan. “What do you mean it’s coming? Are you waiting for a violent, bloody destruction of the Bastille? It’s already there.”