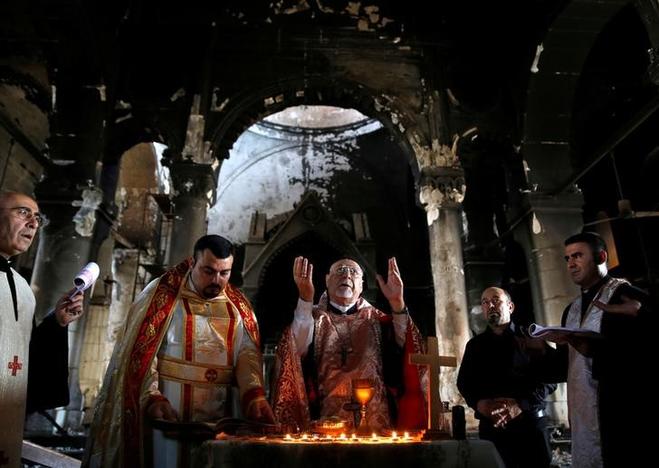 Iraqi priests hold the first Sunday mass at the Grand Immaculate Church since it was recaptured from Islamic State in Qaraqosh, near Mosul, Iraq, October 30, 2016. REUTERS/Ahmed Jadallah

Surrounded by charred walls and in front of a ruined altar, dozens of Iraqi Christians celebrated mass at the Church of the Immaculate Conception in Qaraqosh on Sunday for the first time since it was recaptured from Islamic State.

Church bells rang out in the town on the southeastern approaches to Mosul where Iraqi troops, backed by U.S.-led air and ground forces, have been driving back the Sunni Muslim jihadists ahead of a battle for the city itself.

Islamic State has targeted the adherents and religious sites of minority communities in both Iraq and Syria. When it seized control of Mosul two years ago it issued an ultimatum to Christians: pay a tax, convert to Islam, or die by the sword.

Most abandoned their homes and fled toward the autonomous Kurdish region, abandoning one of Christianity’s earliest centers.

“Our role today is to remove all the remnants of Daesh,” the archbishop said. “This includes erasing sedition, separation and conflicts, which victimized us,” said the archbishop, who was born in Qaraqosh.

“Political and sectarian strife, separating between one man and another, between ruler and follower, these mentalities must be changed,” he said.

Christianity in northern Iraq dates back to the first century AD. The number of Christians fell sharply during the violence which followed the 2003 overthrow of Saddam Hussein, and the Islamic State takeover of Mosul two years ago purged the city of Christians for the first time in two millennia.

It was from a Mosul mosque that Islamic State leader Abu Bakr al-Baghdadi declared a “caliphate” in 2014, spanning northern Iraq and eastern Syria. The recapture of the city would mark the effective defeat of the Iraqi wing of that domain.

2 thoughts on “In charred church near Mosul, Iraqi Christians pray once more”