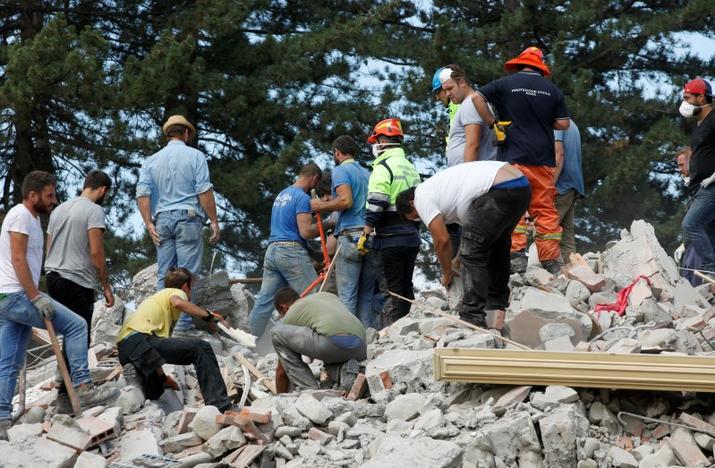 (SOURCE)  Many of those killed or injured were holidaymakers in the four worst-hit towns – Amatrice, Pescara del Tronto, Arquata del Tronto and Accumoli – where populations increase by up to tenfold in the summer. That makes it harder to track the deaths.

One Spaniard, five Romanians, and a number of other foreigners, some of them care-givers for the elderly, were believed to be among the dead, officials said.

Aerial video taken by drones showed swathes of Amatrice, last year voted one of Italy’s most beautiful historic towns, completely flattened. The town, known across Italy and beyond for a local pasta dish, had been filling up for the 50th edition of a popular food festival this weekend.

The mayor said the bodies of 15-20 tourists were believed to be under the rubble of the Hotel Roma, which he said had about 32 guests when it collapsed on Wednesday morning.

About 270 people injured in Wednesday’s quake were hospitalized, the Civil Protection department said, adding that about 5,000 people, including police, firefighters, army troops and volunteers, were involved in post-quake operations.

Rescuers working with emergency lighting in the darkness saved a 10-year-old girl, pulling her alive from the rubble where she had lain for about 15 hours.

Many other children were not so lucky. A family of four, including two boys aged 8 months and 9 years, were buried when a church bell tower toppled into their house in nearby Accumoli. 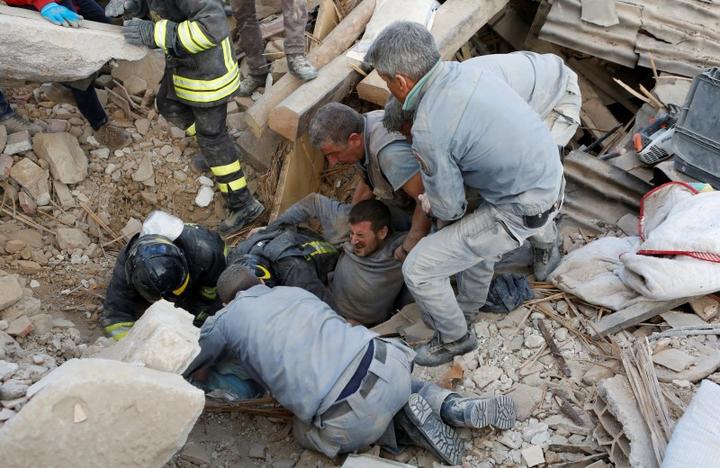 A man is rescued alive from the ruins following an earthquake in Amatrice, central Italy, August 24, 2016. REUTERS/Remo Casilli

“Today is a day for tears, tomorrow we can talk of reconstruction,” he told reporters late on Wednesday.

The death toll appeared likely to rival or surpass that from the last major earthquake to strike Italy, which killed more than 300 people in the central city of L’Aquila in 2009.

While hopes of finding more people alive diminished by the hour, firefighters’ spokesman Luca Cari recalled that survivors were found in L’Aquila up to 72 hours after that quake.

Most of the damage was in the Lazio and Marche regions, with Lazio bearing the brunt of the damage and the biggest toll. Neighboring Umbria was also affected. All three regions are dotted with centuries-old buildings susceptible to earthquakes.

Italy sits on two fault lines, making it one of the most seismically active countries in Europe.

The country’s most deadly earthquake since the start of the 20th century came in 1908, when an earthquake followed by a tsunami killed an estimated 80,000 people in the southern regions of Reggio Calabria and Sicily.