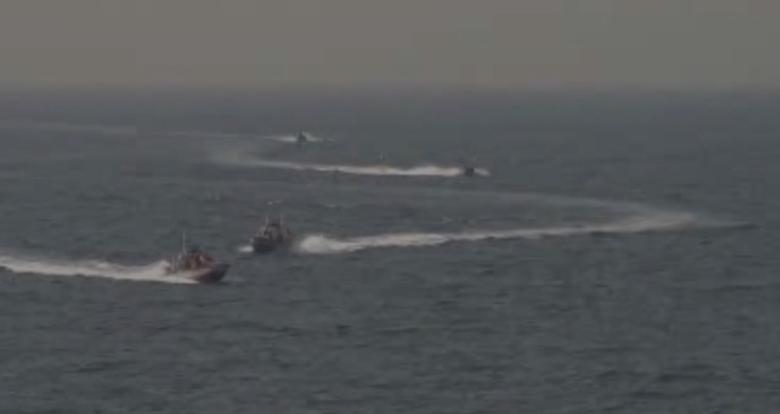 Four of Iran’s Islamic Revolutionary Guard Corps (IRGC) vessels “harassed” a U.S. warship on Tuesday near the Strait of Hormuz, a U.S. defense official said, amid Washington’s concerns about Iran’s posture in the Gulf and in the Syrian civil war.

The official, speaking on the condition of anonymity, said on Wednesday that two of the Iranian vessels came within 300 yards of the USS Nitze in an incident that was “unsafe and unprofessional.”

The vessels harassed the destroyer by “conducting a high speed intercept and closing within a short distance of Nitze, despite repeated warnings,” the official said.

IRGC, the Islamic Republic’s praetorian guard, is suspicious of U.S. military activity near Iran’s borders and appears to be sticking to a familiar posture in the Gulf that predates last year’s nuclear accord between Iran and six world powers, including the United States.

The United States and other countries are concerned about Iran’s support for Syrian President Bashar al-Assad, its ballistic missile program, and its backing for Shiite militias that have abused civilians in Iraq.

“The Iranian high rate of closure… created a dangerous, harassing situation that could have led to further escalation, including additional defensive measures by Nitze,” the official said.

USS Nitze had to change course in order to distance itself from the Iranian vessels, the official said, adding that the incident could have led to a diplomatic protest, but the United States does not have diplomatic relations with Iran.

It remains to be seen whether these actions were carried out by rogue Revolutionary Guard commanders or sanctioned by senior officials in Tehran, said Karim Sadjadpour, an Iran expert at the Carnegie Endowment for International Peace.

“For four decades the Revolutionary Guard have been told that America is the greatest threat to the Islamic Revolution,” said Sadjadpour. “This institutional culture hasn’t changed after the nuclear deal,” he added.

In January, 10 U.S. sailors aboard two patrol craft were detained by the IRGC when they inadvertently entered Iranian territorial waters. They were released the next day after being held for about 15 hours.

The Gulf separates Iran from its regional rival Saudi Arabia and a U.S. naval base in Bahrain.