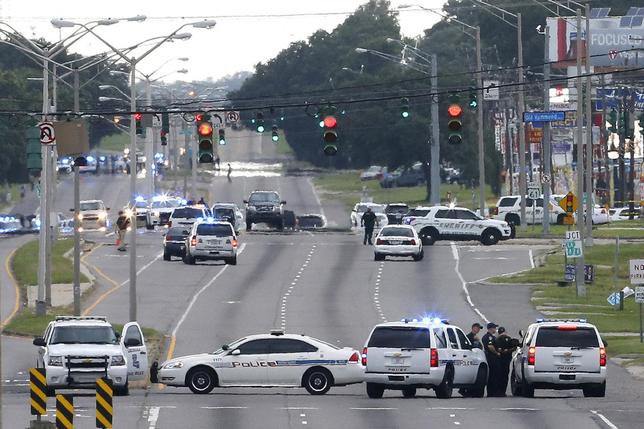 Law enforcement vehicles block access to Airline Highway near the scene of a fatal shooting of police officers in Baton Rouge. REUTERS/Jonathan Bachman

(SOURCE)   The gunman who killed three police officers in Baton Rouge, Louisiana, on Sunday was a former U.S. Marine sergeant who served in Iraq and made the dean’s list in college, government officials with knowledge of the case said.

The suspect, Gavin Eugene Long, 29, who also wounded three other officers, was from Kansas City, Missouri, a source familiar with the investigation told Reuters. He was divorced and living in a working-class neighborhood, and Missouri records show he had no criminal history.

It was not immediately clear how Long, who was black, ended up in Baton Rouge, where police killed him in a shootout on his 29th birthday, according to media reports. The city has become a flashpoint for protests after police shot and killed Alton Sterling, a black man, outside a convenience store there on July 5.

A website, social media accounts and YouTube videos that appear tied to Long include complaints about police abuse of African-Americans and indicate he recently joined demonstrations in Dallas, where a black former U.S. Army reservist killed five officers two days after Sterling’s death.

In a YouTube video, Long praised the killing of the Dallas officers and said, “It’s justice.” He also posted a separate video on July 8, in which he described himself as a former Christian, former member of the Nation of Islam and then repeatedly stated he was now not affiliated with any group.

“They’ll try to put you with ISIS or some other terrorist group,” he said. “No. I’m affiliated with the spirit of justice. Nothing else.”

A website named “convoswithcosmo” that features self-help, health and relationship advice was owned by a Gavin Long at a Kansas City address, according to online records. As of Sunday night, police in Kansas City had cordoned off the block where that address is located. That address also appears in local court records for a Gavin Long in two separate civil cases.

In a YouTube video posted on July 10, the host of “Convos with Cosmo” says he is in Dallas and had gone to the city to join protests there. The man says that African-Americans are oppressed and questions why white American revolutionaries are praised for fighting their oppressors but African ones are not.

Later in the video, he suggests that only violence and financial pressure will cause change.

A government source said federal officials were reviewing the web postings but could not definitively link them to Long.

Long was affiliated with the anti-government New Freedom Group, the Wall Street Journal reported, citing a person briefed on the investigation. A spokeswoman for the Southern Poverty Law Center, which tracks extremist groups, said she had no information about such a group.

Reuters was not able to confirm the existence of the New Freedom Group.

Records provided by the U.S. Marines show Long received a number of awards during his five years in the military, including a good conduct medal.

He served in the Marines from August 2005 to August 2010 as a data network specialist and rose to the rank of sergeant, according to Yvonne Carlock, deputy public affairs officer for the Marines. Long was deployed to Iraq from June 2008 to January 2009.

CBS News reported that he left the Marines with an honorable discharge, but Carlock would not confirm that detail.

Public records show Long had lived in Kansas City and Grandview, Missouri, as well as San Diego and Tuscaloosa, Alabama.

He divorced his wife in 2011, with no children at the time, according to Missouri court records. A home that appears to be the last-known address for his ex-wife was vacant on Sunday.

No relatives for Long could be reached by telephone.

Long was a defendant in a case involving delinquent city taxes that was filed in March and dismissed in June, according to court records.

He attended the University of Alabama for one semester in spring 2012 and made the dean’s list for academic achievement, said university spokeswoman Monica Watts.

“The university police had no interaction with him while he was a student,” she said in an email.