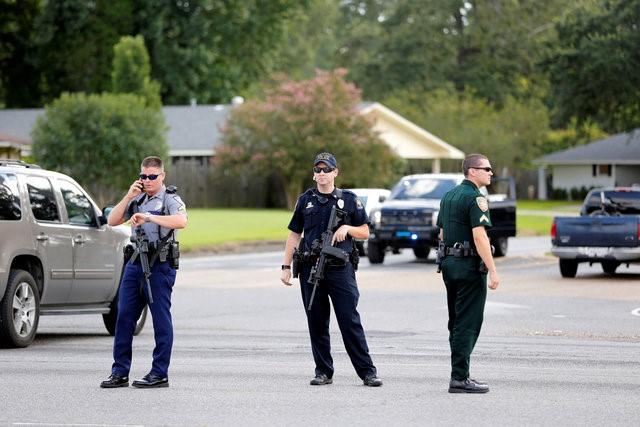 Police officers block off a road after a shooting of police in Baton Rouge, Louisiana, U.S. July 17, 2016. Reuters/Joe Penney

(SOURCE)    A gunman killed three police officers and wounded three others in Louisiana’s capital on Sunday, just days after the police shooting of a black man there sparked nationwide protests, one of which led to the massacre of five Dallas policemen.

Officers in Baton Rouge were responding to a call of a man carrying a gun when shots were fired at around 9 a.m. local time (10.00 a.m. ET). Two Baton Rouge police officers and one sheriff’s deputy were killed.

The gunman died in a shootout with police a short time after he opened fire on the first group of officers, Colonel Mike Edmonson, superintendent of the Louisiana State Police, said in a press conference.

The suspect, identified by a U.S. official as Gavin Long of Kansas City, Missouri, was believed to have acted alone. Investigators suspect a 911 emergency call may have been used to lure police to the scene, the official said on condition of anonymity.

It was not immediately clear whether there was a link between the shootings and the recent unrest over the police killings of black men in Baton Rouge and Minnesota.

Authorities did not give any information about the gunman’s possible motive.

President Barack Obama condemned the attack, vowed that justice would be done and called on Americans to focus on rhetoric and actions that united the country rather than divided it.

“We as a nation have to be loud and clear that nothing justifies violence on law enforcement,” Obama said in televised remarks from the White House.

“There simply is no place for more violence. That doesn’t help anyone, it doesn’t further the conversation, it doesn’t address any injustice, perceived or real. It is just an injustice in and of itself,” he told reporters in Baton Rouge.