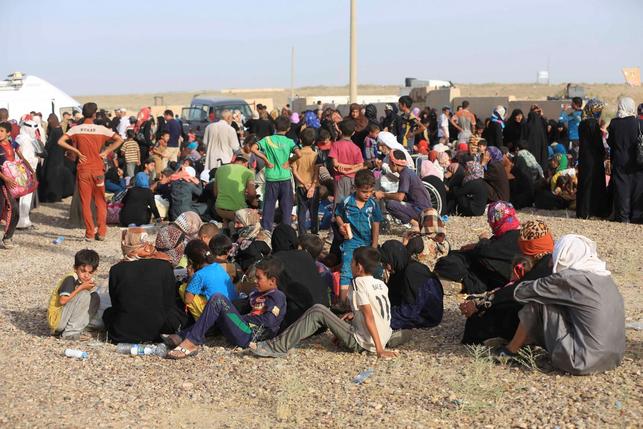 Civilians who fled their homes due to clashes gather at the Iraqi army’s Camp Tariq, south Falluja, Iraq, June 3, 2016. Reuters/Stringer

(SOURCE)   Iraqis who fled Islamic State-held Falluja as government and allied forces advanced on the city said they had survived on stale dates and the militants were using food to enlist fighters whose relatives were going hungry.

The ultra-hardline Sunni fighters have kept a close guard on food storage in the besieged city near Baghdad that they captured in January 2014, six months before they declared a caliphate across large parts of Iraq and Syria.

The militants visited families regularly after food ran short with offers of supplies for those who enlisted, said 23-year-old Hanaa Mahdi Fayadh from Sijir on the northeastern outskirts of Falluja.

“They told our neighbor they would give him a sack of flour if his son joined them; he refused and when they had gone, he fled with his family,” she said.

“We left because there was no food or wood to make fires, besides, the shelling was very close to our house.”

She and others interviewed in a school transformed into a refugee center in Garma, a town under government control east of Falluja, said they had no money to buy food from the group.

The Iraqi government stopped paying the salaries of employees there and in other cities under Islamic State control a year ago to stop the group seizing the funds.

Fayadh escaped Sijir on May 27, four days after the government offensive on Falluja began, with a group of 15 relatives and neighbors, walking through farmland brandishing white flags.

Most of the 1,500 displaced people who found refuge in the school in Garma were women and children, because the army takes men for screening over possible ties with Islamic State. Fayadh said she was waiting for news of her two brothers who were being investigated.

Prime Minister Haider al-Abadi said last week the offensive had slowed to protect tens of thousands of civilians trapped in Falluja with limited access to water, food and electricity.

Fayadh said the situation in the city was very difficult. “The only thing remaining in the few shops open was dates, old, stale dates and even those were very expensive,” she said.

Azhar Nazar Hadi, 45, said the militants had asked her family to move from Sijir into Falluja itself, a clear attempt to use them as human shields.

“We hid,” she said. “There was shooting, mortars and clashes, we stayed hidden until the forces came in” and escorted them out to the refugee center.

The militants took hundreds of people, along with their cattle, with them into Falluja, Hadi said.

“The last seven months we ran out of everything and had to survive on dates, and water,” she said. “Flour, rice and cooking oil were no longer available at an affordable price.”

Abadi ordered the offensive on Falluja, which lies 50 km (32 miles) west of Baghdad, after a series of bombings claimed by Islamic State hit Shi’ite districts of the capital, causing the worst death toll this year.

Between 500 and 700 militants are in Falluja, according to a U.S. military estimate. The Iranian-backed Shi’ite militia coalition that is supporting the Iraqi army offensive on the city says the number of IS fighters there is closer to 2,500.

The United Nations says about 50,000 civilians remain trapped in Falluja, which has been under siege since December, when the Iraqi army recaptured Ramadi, the capital of Anbar province to the west.

When Hadi was asked what Islamic State militants had been telling civilians in Falluja, it was her six-year old child who answered, reciting the Koranic verse: “Be patient, God is with those who are patient.”