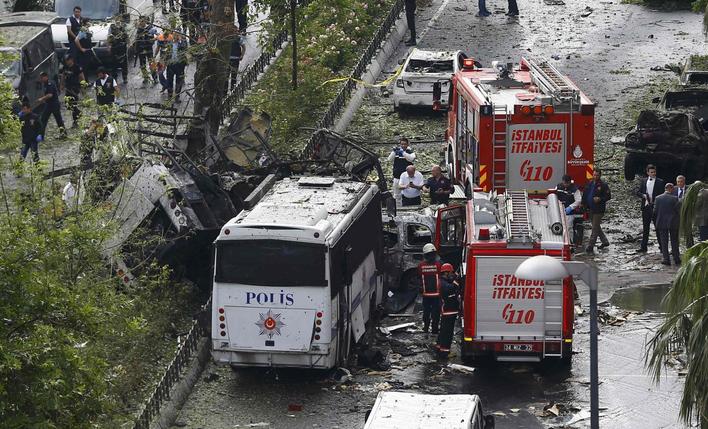 Fire engines stand beside a Turkish police bus which was targeted in a bomb attack in a central Istanbul district, Turkey, June 7, 2016. Reuters/Osman Orsal

(SOURCE)   A car bomb ripped through a police bus in central Istanbul during the morning rush hour on Tuesday, killing 11 people and wounding 36 near the main tourist district, a major university and the mayor’s office.

There was no immediate claim of responsibility but Kurdish militants have staged similar attacks on the security forces before, including one last month in Istanbul.

Security concerns were already hitting tourism and investor confidence. Wars in neighboring Syria and Iraq have fostered a home-grown Islamic State network blamed for a series of suicide bombings, while militants from the largely Kurdish southeast have increasingly struck in cities further afield.

President Tayyip Erdogan vowed the NATO member’s fight against terrorism would go on, describing the attack on officers whose jobs were to protect others as “unforgivable”.

“We will continue our fight against these terrorists until the end, tirelessly and fearlessly,” he told reporters after visiting some of the injured in a hospital near the blast site.

Sahin said the dead included seven police officers and four civilians and that the attack had targeted vehicles carrying members of a riot police unit. Three of the 36 wounded were in critical condition, he said.

The blast hit the Vezneciler district, between the headquarters of the local municipality and the campus of Istanbul University, not far from the city’s historic heart. It shattered windows in shops and a mosque and scattered debris over nearby streets.