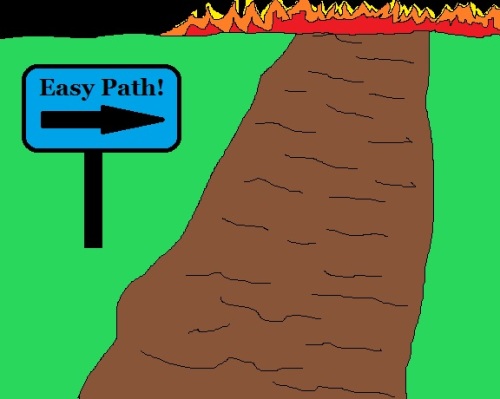 The road is wide which leads to destruction, the path which leads to righteousness is narrow and many will be led astray.  Easy is the way which takes us further away from God, and evil forces from another dimension seek to do us harm.  Knowing these things is wise, giving into the powers of darkness is foolish.

They follow the gods of this world, believing that all ways lead to heaven, that everyone is right and that all of us will end up in the same place, some how, some way.  There are a few exceptions, as some religions believe that theirs is the only way to heaven, yet only one, Christianity, has a God who came into this world and sacrificed Himself for our sins.  Only Jesus Christ can save, only Christ can give eternal life!

The world is taking an easy path, one which is evil and wicked, ways of which will lead to eternal destruction!

The world celebrates humanity and hedonism with “Carnival”, where scantily clad people dance around drinking and worshiping false gods and idols.  All for humanity, for the pleasure-seeking, and the acceptance of immorality!

Tens of thousands of participants worship and party with false gods and evil ideologies each year at the “Burning Man Festival” in the desert of Nevada.  A festival where anything goes and all is acceptable!  All done under the guise of Love and Acceptance.  Little do they know that they are actually worshiping false gods!

Millions of people worldwide celebrate the sexual lifestyle and union of same-sex couples.  They not only celebrate, but are proud of it!  Sexual immorality in the world is a consuming fire out of control.  God told us that this is an abomination to Him, do we believe what He tells us or not?!

Environmentalists say that they want to save the world, in fact many of them are so adamant about this that they actually worship nature!  There is nothing wrong with wanting to care for the planet, in fact God has given us dominion over this task.  However, many in the world today are worshiping nature and creation.  Even the global agenda for climate change is making many decisions which are not based on facts, but are creating a scenario in which they need scientists to skew the facts in order to fit their agenda.  Worshiping nature and creation is evil, it is witchcraft, satanic, and evil!  All of this is leading to a religion which is false, of worshiping nature instead of God!  This is evil, and it is sin, and I believe that it is leading to a One World Religion.  Many of these people value nature more than they do human life.  There is no mother nature my friends, none at all, it was all created by our God, Jesus Christ!

New York city has recently (back in August of 2015) lit up the Empire State building with the Indian goddess Kaali, a false god.  Not only is this a false and demonic god, but she is the goddess of destruction!  And now we hear that New York city is about to erect an arch which was demolished in Syria, the arch of Baal!  Another demonic and false god.  However, I have recently heard that this arch will now be replaced with another arch which was destroyed in Palmyra Syria.  Whatever the case, it was scheduled to be built and erected!  This my friends is demonic activity in America and also England.

Here is another atrocity which has plagued America for decades now, abortion.  Taking the life of the most innocent of humans, without regard for their life or their well-being!  Millions upon millions of unborn babies have been sacrificed under the banner of women’s rights and choice.  Read the banner above, it says “Care. No matter what”.  How is it caring to murder unborn babies?!  Just who in their right mind would think such a thing?  Another evil in the world which plays into the hands of anything goes, and the selfish attitudes of millions of people, all at the cost of human life!  This is wicked and evil.

The persecution of Christians around the world has risen to all time highs.  Christians place godly values on life, on the practice of becoming more holy, righteous, and pure.  These morals and values given to us by God are not always so easy to follow, and it is much easier for the world to just do as they please.  When Christians voice their opinion on what God says is right and wrong, then the secular world takes offense.  They become hostile and bitter towards those placing their faith in Jesus Christ!  This persecution of Christians in the world is becoming more apparent in the West as it has been in other parts of the world, and is a sign of the end times.

Alien invasions and fear of invasions has plagued our television sets for decades, reports of alien spacecraft and UFO sightings are appearing almost daily now.  This is a deception which will lead many into destruction, believing that aliens will come to earth in order to save us!

The world is being deceived in many ways, one of which is climate change.  We have been told for several years now that man has caused the world to heat up.  I recently watched a documentary in which this scientist has been studying the effects of the sun on the temperature of the earth.  He claims that the earth is actually now on a cooling cycle.  The documentary is called “Dark Winter”  by John Casey.  He says that man has very little effect on the climate of the earth, and that we are now headed for a mini ice-age!  So do we believe that what the governments of the world are telling us to be the truth?  I believe that this whole “climate change” agenda is false, and that the government is using it to further bring us into their submission and control, all leading to a One World Government.

The American president Barack Obama is leading people into believing that Islam is a peaceful religion, and he will not even admit that ISIS is part of the Islamic religion.  Islam’s main goal is to take over the world, another is to bring mass destruction in order to bring in the Mahdi, or their Messiah.

The United States borders have been under attack for generations, and the government will not do anything to prevent this, yet they seem to be telling us that everything is just fine! There are countless numbers of aliens who have crossed the Southern U.S. borders illegally.  Just how many of them have come with evil intentions?  There is just no telling, but they are here.

Another great deception is that all religions lead to heaven, and that Islam and Christianity both worship the same God!  This is just not true.  Muslims also claim that they believe in the same Jesus that Christians do.  Well, their Jesus is not God, nor did he die on the cross, nor is he the Messiah.  The Jesus that we Christians believe in is God, He did die on the cross, and He is the Messiah!  Two completely different people, one merely a man, the other man and God!

Don’t be deceived my friends, there are many paths which lead to destruction.  The paths to destruction are wide, and they are easy!  The path which leads to heaven and salvation is narrow, and there are few who find it.  It is not always an easy road, nor is it of this world.  The ways of the world are wicked, and many shall be deceived.

The last days will be marked by the ways of man, by his lack of righteous morals and values.  Devoid of what is holy and pure.

“But know this, that in the last days perilous times will come: 2 For men will be lovers of themselves, lovers of money, boasters, proud, blasphemers, disobedient to parents, unthankful, unholy, 3 unloving, unforgiving, slanderers, without self-control, brutal, despisers of good, 4 traitors, headstrong, haughty, lovers of pleasure rather than lovers of God, 5 having a form of godliness but denying its power. And from such people turn away!”

The world has conformed to what is evil and wicked.  They have blasphemed God Almighty, turned away from Him, and told Him that He is not welcome here!  Their ways have sinned in rebellion against our Lord and Savior!  Just how much longer before He judges the world?  How much longer before He completely lifts His veil of protection?  I sense not much longer.

Take heed to the word of God Almighty, the Savior of the universe!  Listen to what He says, and follow His path.  Do not be deceived by empty words and lies of the enemy.  Not everything you see or hear is the truth.  Deception comes wrapped in fine linens and coatings of sugar.  What appears sweet and good, may in fact be rotten to the core!

The enemy is real, in fact, more real than you and I.  There are evil, wicked, demonic spirits roaming the face of the earth, seeking to devour whomever they can.  Seeking to steal, kill, and destroy!  These spirits are real, and they are here now, leading the lost into destruction.  Put on the full armor of God, fight the good fight, and keep the faith my friends!

12 thoughts on “Following the least path of resistance leads to destruction!”