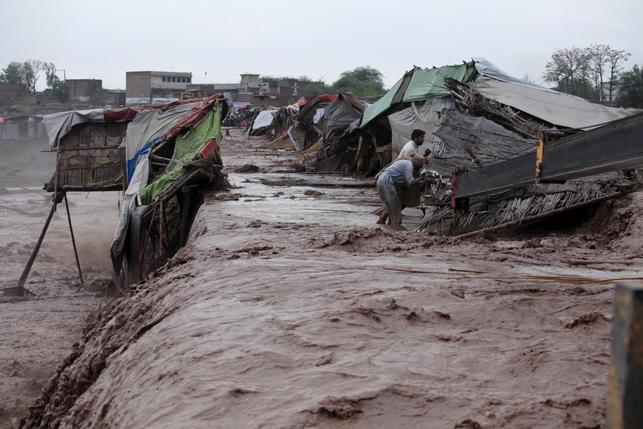 Men collect their belongings from their makshift shop which was damaged by flood water after heavy rain on the outskirts of Peshawar, Pakistan, April 3, 2016. Reuters/Fayaz Aziz

(SOURCE)  Flash floods triggered by heavy rain in Pakistan have killed at least 55 people and rescuers were trying on Monday to help thousands of survivors including some cut off by a landslide in a mountain valley, officials said.

The weather system that brought the unusually heavy rain was expected to move northeast, towards northern India, although more isolated storms were expected in northern Pakistan, the Meteorological Department said.

Yousuf Zia, a disaster management official in Khyber Pakhtunkhwa province, said nearly 150 homes had been destroyed and tents and blankets were being distributed to the homeless.

“There are 30 people stranded by a landslide in the Kohistan Valley where we have sent a helicopter to rescue them,” Zia said.

Landslides caused widespread damage to roads and communication infrastructure in the Pakistani side of Kashmir, they said.

One of the worst-affected districts was the Swat Valley, northwest of the capital, Islamabad, where 121 mm (4.76 inches) of rain fell on Sunday, the Meteorological Department said.