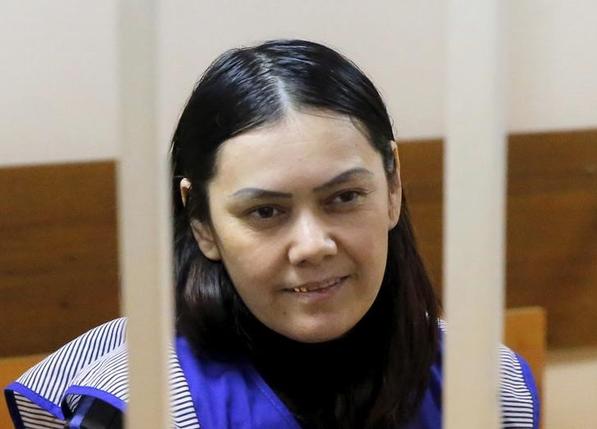 Gyulchekhra Bobokulova, a nanny suspected of murdering a child in her care, sits inside a defendants’ cage as she attends a court hearing in Moscow, Russia, March 2, 2016. Reuters/Maxim Shemetov

(SOURCE)   A woman suspected of beheading a child in her care before brandishing the severed head outside a Moscow metro station said on Wednesday Allah had ordered her to commit the crime.

Police on Monday wrestled to the ground Gulchekhra Bobokulova, a 38-year-old divorced mother of three from the Muslim-majority ex-Soviet state of Uzbekistan, after she wandered around a Moscow street holding the infant’s severed head in the air and shouting Islamist slogans.

Eyewitnesses said at the time they believed she was carrying out a terrorist act, but since her detention, Russian investigators have raised the possibility she might be suffering from mental illness.

Investigators said she had been working as a nanny for a Moscow family and that she had murdered and beheaded one of the children in her care before setting fire to the family flat and fleeing.

State television channels did not report the incident, a move that drew accusations of censorship from some opposition activists but which the Kremlin endorsed, saying it would have been wrong to broadcast such “horrific images”.

Bobokulova told reporters on her way into the courtroom on Wednesday that Allah had ordered her to do what she did but that she had repented and agreed with her arrest.

Sat in the metal cage reserved for defendants in Russian courts, Bobokulova waved and said:

“I am Allah’s messenger. Hello everyone.”

Her head was uncovered and she appeared relaxed, occasionally yawning, in contrast to Monday when she had been dressed in black and wearing a hijab.

Government officials have issued frequent warnings about the danger that Islamic State militants pose to Russia, especially in the light of Russia’s military intervention in Syria in support of President Bashar al-Assad.

Investigators have opened a criminal case against Bobokulova, saying they formally suspect her of murder. They have not mentioned suspecting her of any terrorism-related offence.

The court agreed to detain her for two months while the investigation continued after hearing that she presented an “exceptional risk to public safety”.

Investigators have said she will undergo psychiatric testing.

An investigator said that to date no one else had been identified who was involved in the crime. The judge spoke of possible accomplices still being at large and hiding from the police, without giving details.

Some rights activists have warned of a possible backlash in Russia against migrant workers from Central Asian countries such as Uzbekistan who have in the past been targeted for beatings by far-right groups.

A Communist Party website campaigning for tighter migration rules displayed a picture on Wednesday of a black-clad woman wearing a burka holding a severed head inside a red circle with a line through it to indicate such individuals should be banned.