(SOURCE)   A man fatally shot four people believed to be members of his own family then kept police at bay for several hours on Friday before killing himself, but a 12-year-old girl thought to be the gunman’s daughter escaped the carnage, authorities said.

Although details of the slayings inside a rural home near the community of Belfair, about 25 miles (40 km) west of Seattle, remained under investigation, a Mason County Sheriff’s official said the violence appeared to have stemmed from a “family-domestic situation.”

“As far as I know, this is one family, the shooter was the father and the victims were his family,” Chief Deputy Russell Osterhout told Reuters.

He said the lone survivor, the 12-year-old girl, escaped or was released by the gunman before the suspect emerged from the house after hours of negotiations with law enforcement and a police SWAT team and shot himself in front of sheriff’s deputies.

It remained unclear when the four people found shot to death inside the home were slain.

A neighbor, Jack Pigott, 79, who lives across the road from the crime scene, told Reuters by telephone he heard several bursts of gunfire coming from the wooded property Thursday night, and assumed it was target shooting.

Police arrived at the home after the suspect himself called a sheriff’s sergeant on the officer’s work cell phone to say that he “did something” and asked that authorities be sent to the residence, Osterhout said.

It was not explained how the suspect knew the sergeant’s phone number, but sheriff’s Deputy Chief Ryan Spurling said, “the gunman did have a previous contact with the sergeant.”

When law enforcement officers turned up at the home at about 8:30 a.m. (1630 GMT) they could see the man through a window and could see that he was armed, Osterhout said.

The ensuing standoff with authorities who converged on the sprawling property ended with the suspect emerging at noon and taking his own life, apparently with one self-inflicted gunshot, the chief deputy said, adding that he did not personally witness the suicide.

Osterhout said he believed the four victims were all found in one area on the property, away from the gunman. 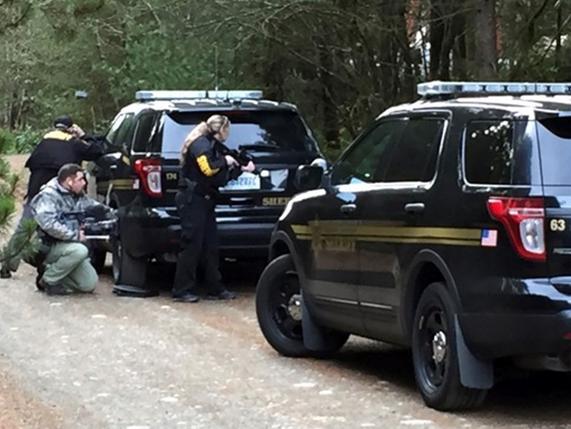 The sheriff’s office earlier released photos showing law enforcement officers with guns drawn taking cover behind their vehicles, and a row of patrol cars parked along a gravel road in a heavily wooded area.

The latest round of deadly U.S. gun violence came a day after a man near Wichita, Kansas, fatally shot three people to death and was slain by police at a Kansas lawnmower factory where he worked.

The girl who survived was found on the property after the standoff and though not seriously injured was transported to an area hospital as a precaution, Osterhout said.

In the dark, he said, he “assumed they were target shooting, which they had a tendency to do once in awhile.”