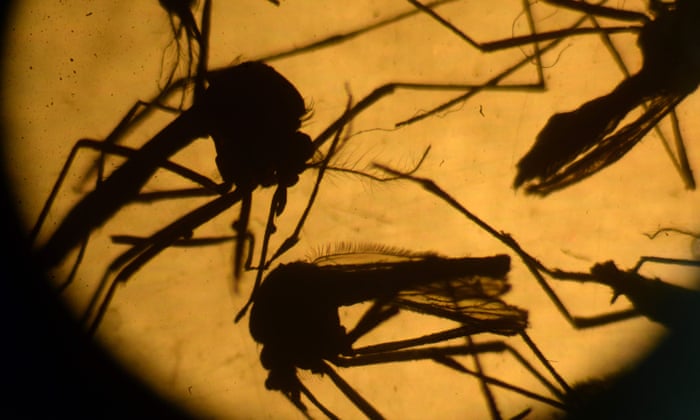 The Zika virus has been linked to thousands of birth defects in Latin America and is transmitted through mosquitos Photograph: Marvin Recinos/AFP/Getty Images

(SOURCE)   A pregnant woman in Queensland has tested positive for the Zika virus, the Queensland department of health has confirmed.

The woman was diagnosed in southeast Queensland on Monday after returning from an overseas trip, where she contracted the virus.

It is the third case of Zika in the state in a week, after a child who had recently returned to Brisbane from a family trip to Samoa and a woman who was tested on the Gold Coast after a holiday in El Salvador were diagnosed on Friday.

The virus has been linked to microcephaly in Brazil, where there have been nearly 4,000 cases of suspected microcephaly and 1.5 million cases of the Zika virus, prompting the World Health Organisation to declare an international emergency.

The Australian government has issued a travel warning recommending that women who are pregnant or actively seeking to get pregnant postpone travel to countries affected by the Zika outbreak until the link between Zika and microcephaly is understood.

That includes most of Central and South America as well as some Pacific Islands like Samoa and Tonga.

Professor Cameron Simmons from the Doherty Institute for Infection told Guardian Australia that it was possible microcephaly, an extremely rare condition that was not monitored in South America before the Zika outbreak, was not connected, but it was also possible that the connection had not been picked up in previous outbreaks.

There were four reported cases of Zika in Queensland in 2015 (the woman who returned from El Salvador contracted the disease in 2015 but was diagnosed last week) and seven in 2014.

A spokeswoman from the department of health said that in all cases the virus had been contracted overseas.

The virus is transferred by the bites of Aedes mosquitoes, primarily Aedes aegypti, the species also responsible for transmitting dengue in far north Queensland. Guardian Australia understands that so far, none of the three people infected have travelled to that area. The health department will begin “enhanced testing” in Townsville, which is home to the problem mosquitos, next month.

Queensland health minister, Cameron Dick, said on Friday that the cases showed the state’s Zika detention system was working and warned it was likely more people would be infected.

“I expect that there will be more positive tests in Queensland – we need to be ready for that,” he said.

Western Australia also reported a positive diagnosis of Zika on Friday, only the second time the virus had been detected in that state.

There have been 23 cases of Zika reported in Australia since 2012, all contracted overseas.