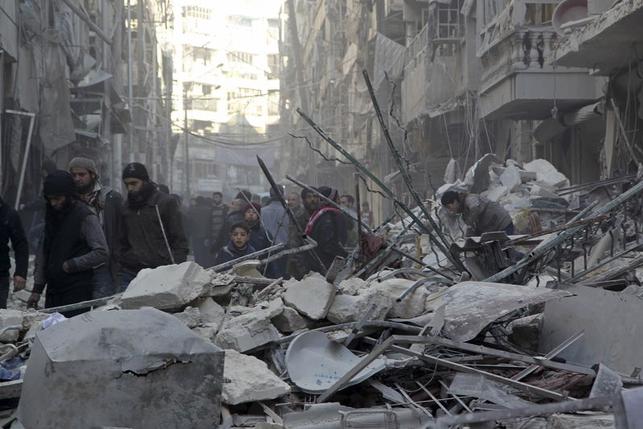 (SOURCE)   By John Davison -Tens of thousands of Syrians fled an intensifying Russian assault around Aleppo on Friday, and aid workers said they feared the city which once held two million people could soon fall under a full government siege.

Iran reported one of its generals was killed on the front line assisting government forces, direct confirmation of the role Tehran is playing along with Moscow in what appears to be one of the most ambitious offensives in five years of civil war.

The government assault around Aleppo, and advances in the south of the country, helped to torpedo peace talks this week in Geneva. President Bashar al-Assad’s forces and their allies are making a new bid to achieve victory on the battlefield after Russia’s intervention ended months of stalemate.

The last 24 hours saw government troops and their Lebanese and Iranian allies fully encircle the countryside north of Aleppo and cut off the main supply route linking the city – Syria’s largest before the war – to Turkey. Ankara said it suspected the aim was to starve the population into submission.

Aleppo would be the biggest strategic prize in years for Assad’s government in a conflict that has killed at least 250,000 people and driven 11 million from their homes.

Video footage showed thousands of people, mostly women, children and the elderly, massing at the Bab al-Salam border crossing. Men carried luggage on top of their heads, and the elderly and those unable to walk were brought in wheelchairs. Some women sat on the side of the road holding babies and awaited to be allowed into Turkey.

“It feels like a siege of Aleppo is about to begin,” said David Evans, Middle East programme director for the U.S. aid agency Mercy Corps, which said the most direct humanitarian route to Aleppo had been severed.

The leader of a prominent rebel group active in northwestern Syria confirmed that government-allied forces were tightening their grip on the northern Aleppo countryside, and that heavy Russian bombing carried on unabated.

“The Russian (air) cover continues night and day, there were more than 250 air strikes on this area in one day,” Hassan Haj Ali, head of Liwa Suqour al-Jabal, a group that fights under the umbrella of the Free Syrian Army, told Reuters.

“The regime is now trying to expand the area it has taken control of … Now the northern countryside (of Aleppo) is totally encircled, and the humanitarian situation is very difficult,” he said.

Syrian state TV and a monitoring group said the army and its allies had seized the town of Ratyan north of Aleppo, building on gains made earlier in the week. Haj Ali said the town had not yet fallen, but that there were “very heavy battles”.

The Syrian army and its allies broke a three-year rebel siege of two Shi’ite towns in Aleppo province on Wednesday, cutting off a major supply line from Turkey to Aleppo.

Aleppo, Syria’s commercial hub, has been divided for years between a section under government control and areas that are in the grip of rebels. Much of Aleppo, including a UNESCO heritage old city, is largely in ruins.

Haj Ali said most of the fighters on the government side were “Iranian and from Hezbollah, or Afghan”.

The five-year civil war pits a government led by Assad, a member of the Alawite sect derived from Shi’ite Islam, against a range of insurgents who are mainly Sunni Muslims, backed by Saudi Arabia, other Arab states and Turkey. Western countries have also lined up in opposition to Assad.