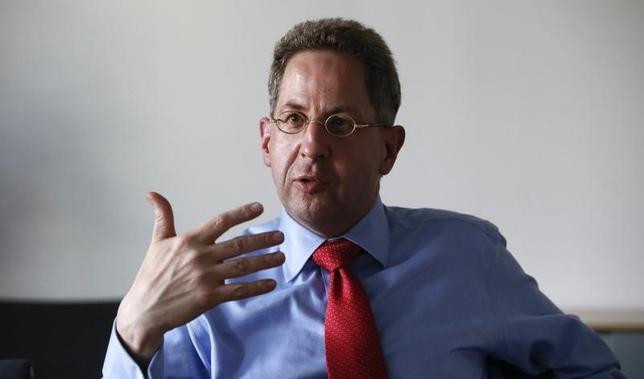 Hans-Georg Maassen from the Federal Office for the Protection of the Constitution (BfV) gestures during an interview in Berlin, Germany August 4, 2015. REUTERS/Fabrizio Bensch

(SOURCE)   Islamic State militants have slipped into Europe disguised as refugees, the head of Germany’s domestic intelligence agency (BfV) said on Friday, a day after security forces thwarted a potential IS attack in Berlin.

Hans-Georg Maassen said the terrorist attacks in Paris last November had shown that Islamic State was deliberately planting terrorists among the refugees flowing into Europe.

“Then we have repeatedly seen that terrorists … have slipped in camouflaged or disguised as refugees. This is a fact that the security agencies are facing,” Maassen told ZDF television.

“We are trying to recognize and identify whether there are still more IS fighters or terrorists from IS that have slipped in,” he added.

The Berliner Zeitung newspaper cited Maassen on Friday as saying that the BfV had received more than 100 tip-offs that there were Islamic State fighters among the refugees currently staying in Germany.

German fears about an attack have risen since the Paris killings. On Thursday, German forces arrested two men suspected of links to Islamic State militants preparing an attack in the German capital.

Maassen, however, warned against alarm.

“We are in a serious situation and there is a high risk that there could be an attack. But the security agencies, the intelligence services and the police authorities are very alert and our goal is to minimize the risk as best we can,” he said.