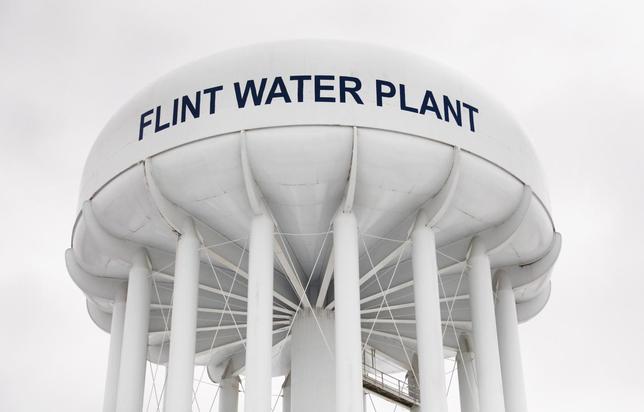 The top of a water tower is seen at the Flint Water Plant in Flint, Michigan in this file photo from January 13, 2016. REUTERS/Rebecca Cook/Files

(SOURCE)   Rev. Jesse Jackson said on Sunday that Flint, Michigan is a “disaster zone” and could be the next epicenter in the fight for economic and social equality as the city struggles through a crisis with lead-contaminated drinking water.

Speaking at a church rally in Flint a day after President Obama declared a federal emergency, the prominent civil rights leader compared the city to Selma and Montgomery, Alabama, places where the civil rights movement in the 1960s unfolded.

“The people of Flint have been betrayed,” he said. “This is the time for us to make a bigger statement than we have made in a long time. You can never tell when the spirit will strike and then it’s time for everyone to move.”

Flint, about 60 miles (100 km) northwest of Detroit, returned to using that city’s water supply in October after tests found elevated levels of lead in the water and in the blood of some children. Lead contamination can cause brain damage and other health problems when ingested.

Obama declared an emergency in Michigan on Saturday and ordered federal aid for state and local response efforts in Genesee County, where Flint, a city of just under 100,000 residents, is located.

The financially strapped city, where a majority of residents are African-American, was under control of a state-appointed emergency manager when it switched its source of tap water from Detroit’s system to the nearby Flint River in April 2014 in an effort to save money.

“We have been treated like we don’t matter because we are from Flint,” said Melissa Mays, a member of the Coalition for Clean Water during the rally. “It’s our job to stand up and say no, we’re done. We’re not going to put up with this anymore.”

Republican Governor Rick Snyder has apologized for the state’s handling of the crisis as calls for him to resign have grown louder over the last week.

The more corrosive water from the Flint River leached lead from the city pipes more than Detroit water did, leading to the current problems.

Last week, the Michigan attorney general said his office would investigate whether any laws were violated in Flint related to the crisis. His probe follows one launched earlier by the U.S. Attorney in Detroit.

Some Flint residents sued Snyder, other officials, Michigan and the city on Jan. 7 in Genesee County court and are seeking class action status covering all residents.

Other Flint residents late last year filed a federal lawsuit. Genesee County also has seen a spike of Legionnaires’ disease resulting in 10 deaths that may or may not be related to the water crisis, state officials previously said.

(Reporting by Brendan O’Brien in Milwaukee; Editing by Alan Crosby)